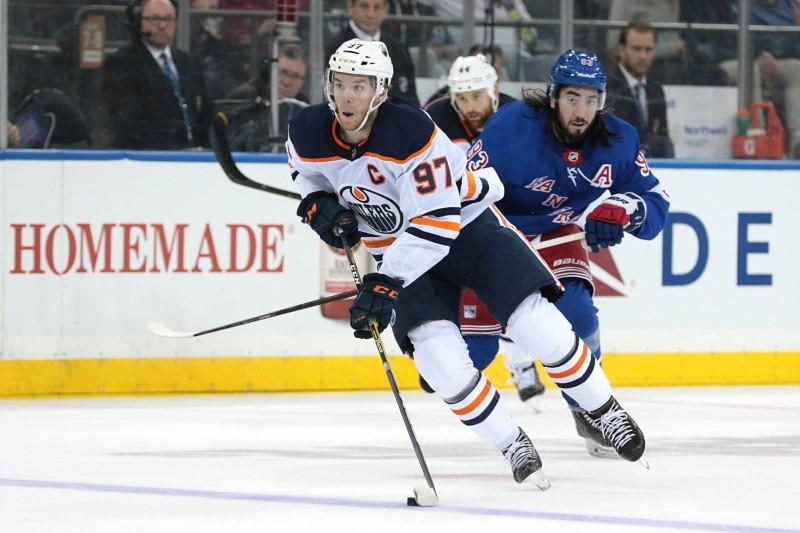 Connor McDavid scored the go-ahead goal on a power play with 10:16 remaining, and Leon Draisaitl collected two goals and an assist as the Edmonton Oilers dominated the third period and remained unbeaten with a 4-1 victory over the host New York Rangers on Saturday afternoon.

The Oilers improved to 5-0 for the first time since the 1985-86 season and became the first team in NHL history to open a season with five straight wins while overcoming a deficit in each contest.

McDavid scored his fourth goal of the season and notched his seventh point on the power play after drawing an interference penalty on Brendan Lemieux. McDavid also scored 84 seconds after Edmonton killed off his tripping penalty.

New York was denied a 3-0 start after having six days off since a 4-1 win in Ottawa last Saturday. Rangers goaltender Henrik Lundqvist finished with 23 saves, while Mike Smith stopped 20 shots for Edmonton.

Dustin Brown had a goal and two assists as Los Angeles won its home opener against Nashville.

The Kings scored three goals in the final minute — two on an empty net — after the Predators (3-2-0) tied the game with 8:30 to play. Los Angeles (2-2-0) blew a three-goal lead in the third period after Colton Sissons, Matt Duchene and Viktor Arvidsson scored to tie the game 4-4.

Jack Campbell, who picked up the Kings’ only win entering Saturday in his lone start this season, started against Nashville and made 28 saves. Juuse Saros made 30 saves in his second start this season for Nashville.

Artturi Lehkonen jammed in a rebound off his own shot to break a 3-3 tie as Montreal scored four consecutive goals to pull out the victory over visiting St. Louis.

Brendan Gallagher and Max Domi also scored third period goals for the Habs. Tomas Tatar, Jonathan Drouin and Domi each had a goal and an assist, Gallagher also had two assists for a three-point game, and Phillip Danault scored a goal for Montreal, which snapped a two-game losing streak.

Brayden Schenn had a goal and an assist, and Sammy Blais and Vince Dunn also scored goals for St. Louis, which suffered its first regulation loss of the season. The defending Stanley Cup champions had scored a point in four straight games to begin the season to match a franchise record.

Tuukka Rask stopped all 31 shots he faced in his first shutout of the season as Boston beat visiting New Jersey.

Brad Marchand, Joakim Nordstrom and Patrice Bergeron scored as the Bruins (4-1-0) won for the fourth time in five games to begin the new year. Rask turned away just six shots in the third period to complete the shutout.

Cory Schneider made 29 saves for the Devils (0-3-2), who have dropped five straight to begin the season. New Jersey was shutout for the second time in four nights.

Mark Scheifele scored on a one-timer 47 seconds into overtime to lift Winnipeg to a come-from-behind win at Chicago.

Blake Wheeler slipped a pass to Scheifele, who blasted a shot from the top of the left circle to cap the Jets’ comeback. Winnipeg (4-2-0) trailed 2-0 in the first before scoring the final three goals to earn its third straight win.

Jets goaltender Connor Hellebuyck stopped 27 of 20 shots to improve to 3-1-0 on the season. Blackhawks goaltender Robin Lehner turned aside 30 of 33 shots in his team debut with Chicago.

Brock Nelson scored the first — and only — goal in the shootout as New York edged Florida in Uniondale, N.Y.

Anders Lee and Josh Bailey scored for the Islanders, who snapped a two-game losing streak. Semyon Varlamov made 35 saves in regulation and overtime before stopping all three shots he faced in the shootout.

Denis Malgin and Evgenii Dadonov scored for the Panthers, who lost in the shootout for the second time in as many nights and have lost three in a row overall. Goalie Sam Montembeault recorded 26 saves in his first start of the season.

Pierre-Luc Dubois scored 1:15 into the third period as Columbus handed Carolina its first loss of the season in Raleigh, N.C.

Erik Haula, who scored his team-leading fifth goal, and Dougie Hamilton scored for Carolina. Hamilton, a defenseman, has a career-long four-game goal streak.

A three-point game for Vladislav Namestnikov led Ottawa over visiting Tampa Bay for its first victory of the season.

After twice surrendering leads in the game, the Senators went ahead for good when Namestnikov scored 16:57 into the final frame. Namestnikov added an empty-net goal in the final minute, and also collected an assist on Jean-Gabriel Pageau’s goal in the second period.

The Senators acquired Namestnikov in a trade with the Rangers on Monday, and the forward has already made an immediate impact with his new team. Namestnikov also collected an assist in his first game as a Senator, a 6-4 loss to the Blues on Thursday.

Nicholas Shore and Ilya Mikheyev each had a goal and an assist as Toronto turned a one-goal deficit into a blowout in Detroit.

Alexander Kerfoot, Jake Muzzin and Trevor Moore also scored for the Leafs, while Frederik Andersen made 25 saves. Jacob de la Rose had a goal and an assist for the Wings and Darren Helm also scored. Jimmy Howard stopped 36 shots.

Detroit scored first at 3:44, but the Leafs tied it by the end of the first period, carried a 2-1 lead into the third, and put the game away with a pair of goals in the final 6 1/2 minutes.