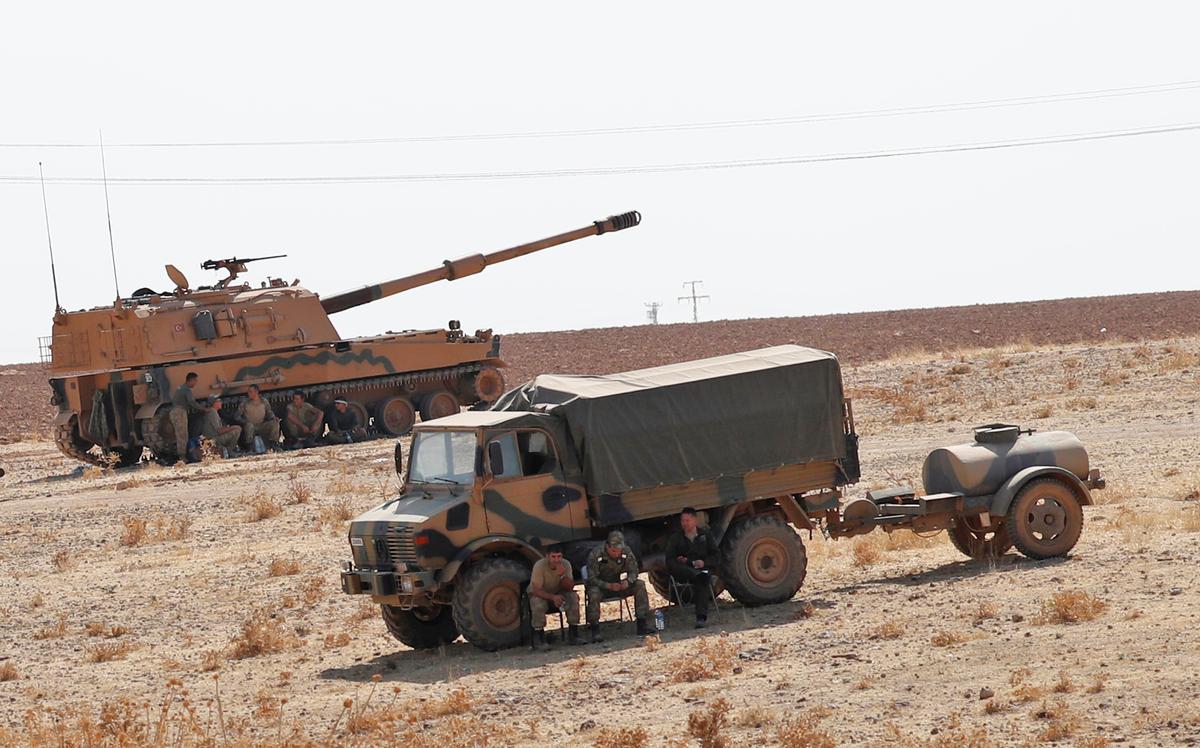 ISTANBUL (Reuters) – Turkish forces targeted areas around two Syrian border towns with fresh shelling on Sunday, pressing on with their offensive against Kurdish militia for a fifth day in the face of fierce international opposition.

Turkey is facing threats of possible sanctions from the United States unless it calls off the incursion, while the Arab League has denounced the operation and NATO allies Germany and France said they were halting weapons exports to Turkey.

Ankara launched the cross-border assault against the YPG militia after U.S President Donald Trump withdrew some U.S. troops from the border region. Turkey says the YPG is a terrorist group aligned with Kurdish militants in Turkey.

Gunfire resounded early on Sunday around Ras al Ain, one of two Syrian towns which are the focus of the attack, while Turkish artillery continued to target the area, a Reuters reporter across the border in the Turkish town of Ceylanpinar said.

Turkish-backed Syrian rebels advanced into Ras al Ain on Saturday. Turkey has said it took control of the town center, while Kurdish-led forces denied that and said they were counter-attacking.

At Tel Abyad, the operation’s other main target some 120 km (75 miles) to the west, Turkish howitzers shelled outlying districts, a witness in the neighboring Turkish town of Akcakale said.

The assault has raised international alarm over its mass displacement of civilians and the possibility of Islamic State militants escaping from Kurdish prisons.

In the latest criticism, British Prime Minister Boris Johnson expressed “grave concern” about the offensive to Turkish President Tayyip Erdogan, saying it may worsen the humanitarian situation and undermine progress against Islamic State.

“He urged the President to end the operation and enter into dialogue,” a spokesman for Johnson said after the telephone call between the two leaders on Saturday evening.

Turkey’s Defence Ministry said on Sunday that 480 YPG militants had been “neutralised” since the operation began, a term that commonly means killed.

The Syrian Observatory for Human Rights, a UK-based organization which reports on the war, said 74 Kurdish-led fighters, 49 Turkey-backed Syrian rebels and 30 civilians have been killed in the fighting.

In Turkey, 18 civilians have been killed in cross-border bombardment, Turkish media and officials say.

President Trump on Saturday defended his decision to withdraw troops from the Syrian border region, telling conservative Christian activists that the United States should prioritize protecting its own borders.

“Let them have their borders, but I don’t think our soldiers should be there for the next 50 years guarding a border between Turkey and Syria when we can’t guard our own borders at home,” Trump said in a speech in Washington.

The Kurdish-led administration in Syria’s northeast has said nearly 200,000 people had been uprooted so far by the fighting, while the U.N. World Food Programme said more than 100,000 had left Ras al Ain and Tel Abyad.

Turkey’s stated objective is to set up a “safe zone” inside Syria to resettle many of the 3.6 million Syrian war refugees it has been hosting. Erdogan has threatened to send them to Europe if the EU does not back his assault.

He has also dismissed the growing condemnation of the operation, saying that Turkey “will not stop it, no matter what anyone says”.

The Kurdish-led Syrian Democratic Forces (SDF), in which the YPG comprises the main fighting element, holds most of the northern Syrian territory that once made up Islamic State’s “caliphate” in the country.

The SDF has been keeping thousands of fighters from the jihadist group in jail and tens of thousands of their family members in camps. Islamic State has claimed responsibility for a car bomb on Friday in Qamishli, the largest city in the Kurdish-held area, where some IS militants fled from a jail.

The SDF accused Turkey-backed rebel fighters of killing a Kurdish politician in a road ambush on Saturday. The rebel force denied it, saying it had not advanced that far.

The Syrian Observatory said Turkey-backed groups had killed nine civilians on the road, including Hervin Khalaf, co-chair of the secular Future Syria Party.

Reporting by Daren Butler and Reuters correspondents in the region; Editing by Elaine Hardcastle