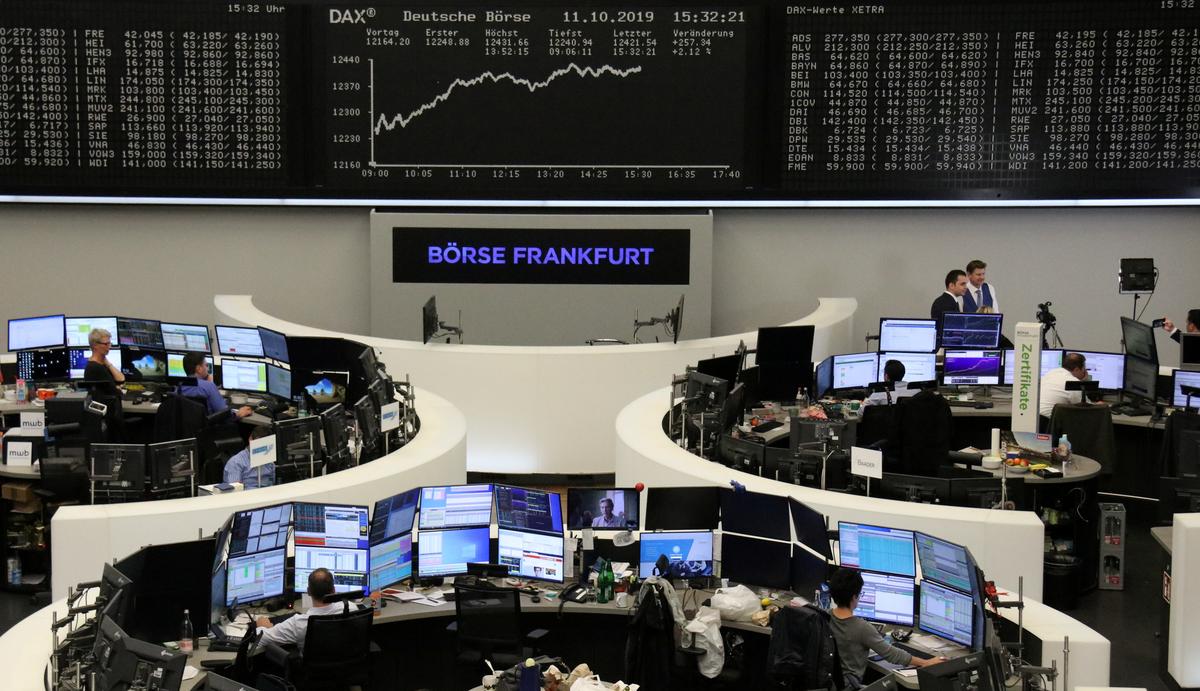 LONDON (Reuters) – A global index of stock markets slipped on Monday as signs of progress in the China-U.S. trade dispute drew mixed a reaction from investors, with some cautioning over a lack of detail in the initial stages of the agreement.

Stock markets in Asia cheered U.S. President Donald Trump’s outlining the first phase of an agreement to end a trade war with China and suspending a threatened tariff hike, but European shares slipped.

Germany’s DAX .GDAXI, dominated by companies exposed to China, slipped 0.5%. All European country indexes were in the red.

The emerging trade deal, covering agriculture, currency and some aspects of intellectual-property protection, would represent the biggest step by the two countries in 15 months. But investors advised caution.

“While a positive development, we are not absolutely certain that this marks the start of a clear de-escalation of the trade dispute,” said Mark Haefele, chief investment officer at UBS Global Wealth Management. A number of issues were unresolved or unclear, in his view.

“A delay to the scheduled December tariffs was not announced, although that’s likely if a deal is reached, and the state of provisions on intellectual property, forced technology transfer, and Chinese state subsidies, the most difficult aspects of the negotiations, are still unclear.”

Contributing to the gingerly reception of phase 1 of the trade agreement were data showing a further contraction of Chinese exports and imports in September. Liquidity was also lacking with Japan off and a partial market holiday in the United States for Columbus Day.

The drag from the trade war was a major reason Singapore’s central bank eased monetary policy on Monday for the first time in three years. Data showed the city-state’s economy had only narrowly dodged recession.

The progress on trade was still enough to hit safe-haven bonds. Yields on U.S. 10-year Treasury notes rose to 1.7530% US10YT=RR.

The yield curve also steepened as short-term rates were held down by news the Federal Reserve would start buying about $60 billion per month in Treasury bills to ensure “ample reserves” in the banking system.

The fading rally in risk assets as European markets opened saw the Japanese yen regain ground against the dollar. The currency was 0.2% higher to the dollar at 108.22 JPY=.

The dollar .DXY gained 0.2% against a basket of currencies.

Sterling fell to $1.2556 GBP=, retreating from a 15-week high of $1.2708 on Friday on optimism Britain could reach a deal on Brexit with the European Union. However, both British and EU officials said on Sunday more work would be needed to secure an agreement.

More talks will be held on Monday before a summit of EU leaders in Brussels on Thursday and Friday.

Oil prices pared gains made on Friday after reports that an Iranian state-owned oil tanker had been attacked in the Red Sea.

Investors were also watching Turkey’s incursion into Syria as the White House threatened to impose sanctions on Ankara.