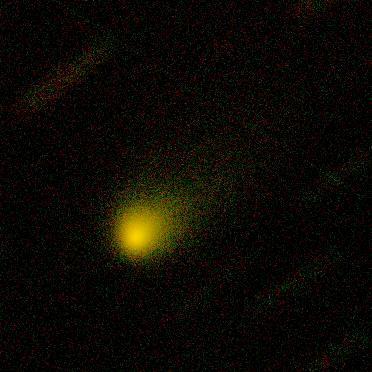 WASHINGTON (Reuters) – The second interstellar object ever spotted passing through the solar system is a comet that appears quite like those formed in our neighborhood of the cosmos, providing fresh evidence that other planetary systems may be very similar to our own.

Astronomers on Monday provided some of the first details about the comet now hurtling toward the sun, saying it has a solid nucleus with a radius of about six-tenths of a mile (1 km), a cloud-like structure of dust and gas emitted by the nucleus, the telltale tail of a comet and a reddish color.

First detected in August by an amateur astronomer named Gennady Borisov, it is called 2I/Borisov. The only previous interstellar visitor discovered in our solar system was a cigar-shaped rocky object called ‘Oumuamua found in 2017.

The comet was studied using telescopes in Hawaii and Spain.

“Its properties determined so far – morphology, color, estimated size – are remarkably similar to the native solar system comets. This is important because it shows that comets exist in interstellar space, confirming long-standing predictions, and it tells us that comets similar to the ones we know from this solar system also form around other stars,” said astronomer Michal Drahus of Jagiellonian University in Poland.

Both 2I/Borisov and ‘Oumuamua formed in other planetary systems and were ejected by gravitational perturbations into interstellar space as orphans wandering the cosmos.

“Our Solar System is regularly visited by escapees from other planetary systems, and it has always been this way. It’s just that we haven’t been able to detect them until recently,” Drahus said.

The speed of 2I/Borisov and the nature of its orbital path demonstrated that it did not originate in our solar system, Jagiellonian University astronomer Piotr Guzik said. Guzik added that he expects that within a decade or so a space probe will be sent from Earth to visit an interstellar object.

“I think this is the most important and transformative moment for planetary astronomy since the discovery of the first exoplanets (planets in other star systems) in the early 1990s and a milestone for astronomy in general. Interstellar minor bodies are this long-sought bridge between other planetary systems and our own solar system. I like to think of them as miniature exoplanets in our own cosmic backyard,” Drahus said.

The research was published in the journal Nature Astronomy.

Reporting by Will Dunham; Editing by Sandra Maler