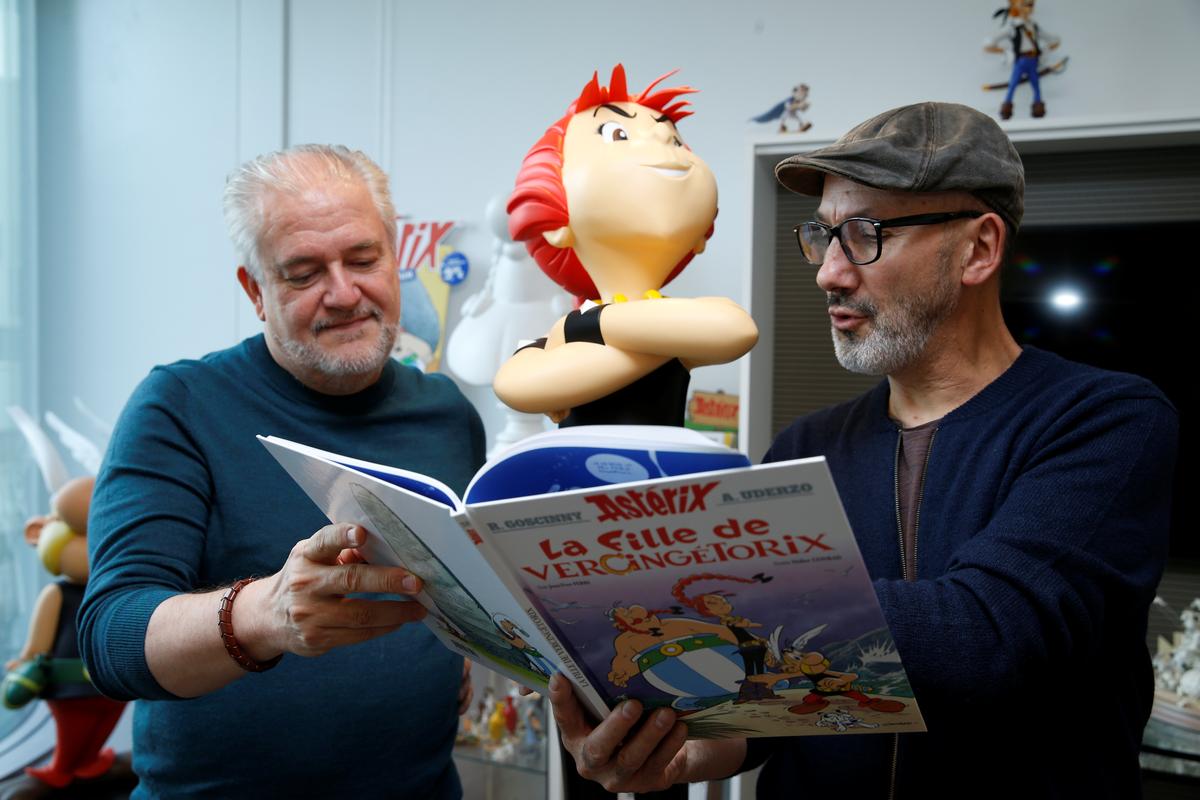 PARIS (Reuters) – Asterix, the indomitable pint-sized Gaul forever outfoxing the Romans, returns this week for his 38th comic book adventure “Asterix and the Chieftain’s Daughter” featuring for the first time in its 60 year history a female heroine.

Author Jean-Yves Ferri and illustrator Didier Conrad pose with their new Asterix comic album “La Fille De Vercingetorix” (Asterix and the ChieftainÕs daughter) and a figure of the character Adrenaline during an interview in Vanves near Paris, France, October 22, 2019. The latest in the series created by illustrator Albert Uderzo and writer Rene Goscinny in 1959. Picture taken, October 22, 2019. REUTERS/Pascal Rossignol

In a move to update the books, which have been entertaining readers since 1959 and spawned multiple movie spinoffs, the action in the new edition revolves around a character called Adrenaline, the teenage daughter of famous Gaulish king Vercingetorix.

With her long red braided hard, black trousers, gold headphones and grumpy teenage disposition, Adrenaline will keep Asterix and his oversized sidekick Obelix chasing after her to ensure her safety as she explores adolescent rebellion.

The last three editions of Asterix have been written by Jean-Yves Ferri and drawn by Didier Conrad, sticking closely to the original format.

“We didn’t want to develop a character who would be based on her seductive side as we usually do with female characters in Asterix. Most of the time they are young attractive women who seduce Obelix and their role stops there,” Conrad said.

In the latest edition, Asterix and Obelix must protect Adrenaline, who is being hunted down by the Romans, while also being confronted by the intergenerational gap between them and the young chieftain’s daughter.

“In terms of the vocabulary it was quite amusing because I had to create a sort of teenage language for the time. We don’t have a lot of documentation about that. So the idea was to use certain expressions like teenagers do,” said Ferri, the scriptwriter.

Asterix’s 38th adventure, printed in 5 million copies, will be released on Thursday.

The Asterix books have become a mainstay in the publishing industry, with more than 370 million copies sold worldwide.

As well as being translated into more than 100 languages, the books have inspired a dozen movies and cartoon series, making it a global phenomenon.