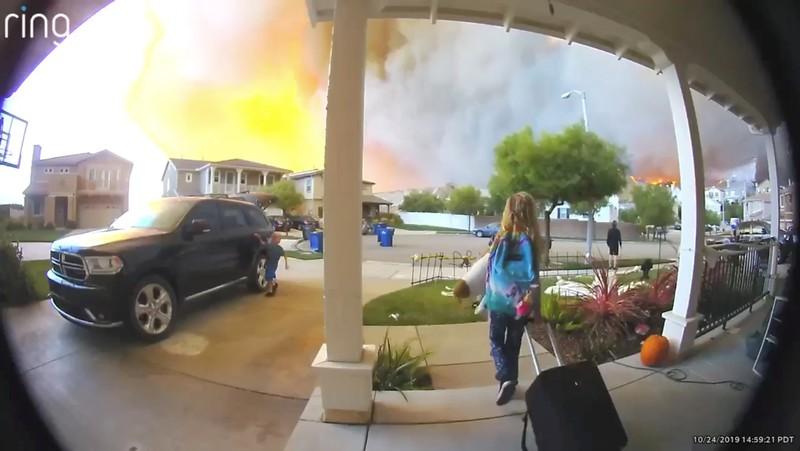 LOS ANGELES (Reuters) – California firefighters raced against time on Saturday as they cut defensive lines against a wildfire in Sonoma County’s famed wine country and authorities ordered 50,000 people to evacuate, ahead of winds that are forecast to pick up at night and spread the flames.

The expanded evacuation orders came as the utility Pacific Gas and Electric Corp prepared to shut off power to about 940,000 customers in 36 of the state’s counties to guard against the risk that an electric mishap could spark a blaze.

The move to cut power to so many people quickly drew a rebuke from California Governor Gavin Newsom, who called it “unacceptable” in a video message on Twitter. The Democratic governor has blamed the bankrupt utility for lackluster investment in its infrastructure that he says makes its protective blackouts larger than they need to be.

Among the areas where power was shut off were parts of Sonoma County charred by the 25,000-acre (10,000-hectare) Kincade Fire.

The blaze burning along steep hillsides in rugged terrain north of San Francisco was one of two major wildfires burning in California, with the other, the Tick Fire, raging in suburban Los Angeles where it has charred 4,600 acres (1,700 hectares) with hundreds of residents still under evacuation orders on Saturday.

The more than 2,000 firefighters battling the Kincade Fire, which officials said was 10% contained and has destroyed nearly 50 structures, faced a more immediate threat from weather than crews battling the Tick Fire.

Winds around the Kincade Fire were expected to reach peak intensity on Saturday night into early Sunday, with sustained speeds of up to 40 miles per hour (90 kph) and gusts of 80 mph (130 kph) in mountains and canyons, said Ryan Walburn, a meteorologist with the National Weather Service.

The winds will likely push flames toward the southwest, Walburn said, which would bring it closer to the 101 Freeway and put the towns of Windsor and Healdsburg at risk.

Authorities on Saturday ordered all the residents of those two towns to leave, with more than 50,000 people in Sonoma County told to evacuate.

Sonoma County supervisors and other officials at a news conference compared the potential for damage from the wildfire to an October 2017 complex of blazes that destroyed entire residential subdivisions in the nearby town of Santa Rosa and killed more than 40 people.

“This is a life-threatening situation and a danger to our entire town,” said Windsor Mayor Dominic Foppoli, whose town has a population of nearly 30,000 people.

In an episode that underscored the dangers of civilians staying behind, on Friday evening a firefighter on the Kincade Fire had to deploy a portable shelter – which is made of aluminum and looks like a giant burrito wrapper – and bring two civilians inside to escape advancing flames, said California Department of Forestry and Fire Protection (CAL FIRE) spokesman Jonathan Cox.

“The decisions that people make regarding evacuations affect the first-responders lives, and we can’t ask you enough: For us to be successful we must have the public evacuate,” Cox said.

The winds were forecast to weaken on Sunday afternoon.

The cause of the Kincade Fire is still under investigation, but officials have said it erupted on Wednesday near the base of a damaged high-voltage transmission tower owned by PG&E.

Earlier in the week, authorities had ordered 2,000 people to evacuate their homes, with flames coming closest to Geyserville, a historic enclave home to about 900 residents and named for geothermal features in the vicinity.

The blaze also has encroached on wineries in a region full of internationally known vintners, including “The Godfather” director Francis Ford Coppola.

PG&E said it began shutting off power to some customers in Northern California on Saturday afternoon, in blackouts that would continue rolling out into Sunday evening when residents of Kern County north of Los Angeles would have their electricity shut off.

“We are constantly working to minimize the impact of these safety shutoffs while prioritizing public safety,” Hosn said.

The Tick and Kincade fires have worsened air quality in Los Angeles, San Francisco and areas around those two large cities.

People evacuate a house as a fire rages in a distance in Santa Clarita, California, U.S., October 24, 2019, in this still image taken from a doorbell camera footage obtained from social media. Ben Ibarra/via REUTERS

In L.A.’s San Fernando Valley, which is just south of the Tick Fire, officials closed all public schools on Friday, giving thousands of students the day off, because of poor air quality.

At its peak, the Tick Fire burning in the Santa Clarita Valley north of Los Angeles forced the evacuation of about 50,000 people. It has destroyed at least nine structures since erupting from an unknown cause on Thursday and has been 25% contained, officials said on Saturday. No injuries have been reported.

Authorities allowed nearly all the residents displaced by the Tick Fire to return to their homes by Saturday morning, said Los Angeles County Fire Captain A.J. Lester, with only several hundred people still under evacuation orders.