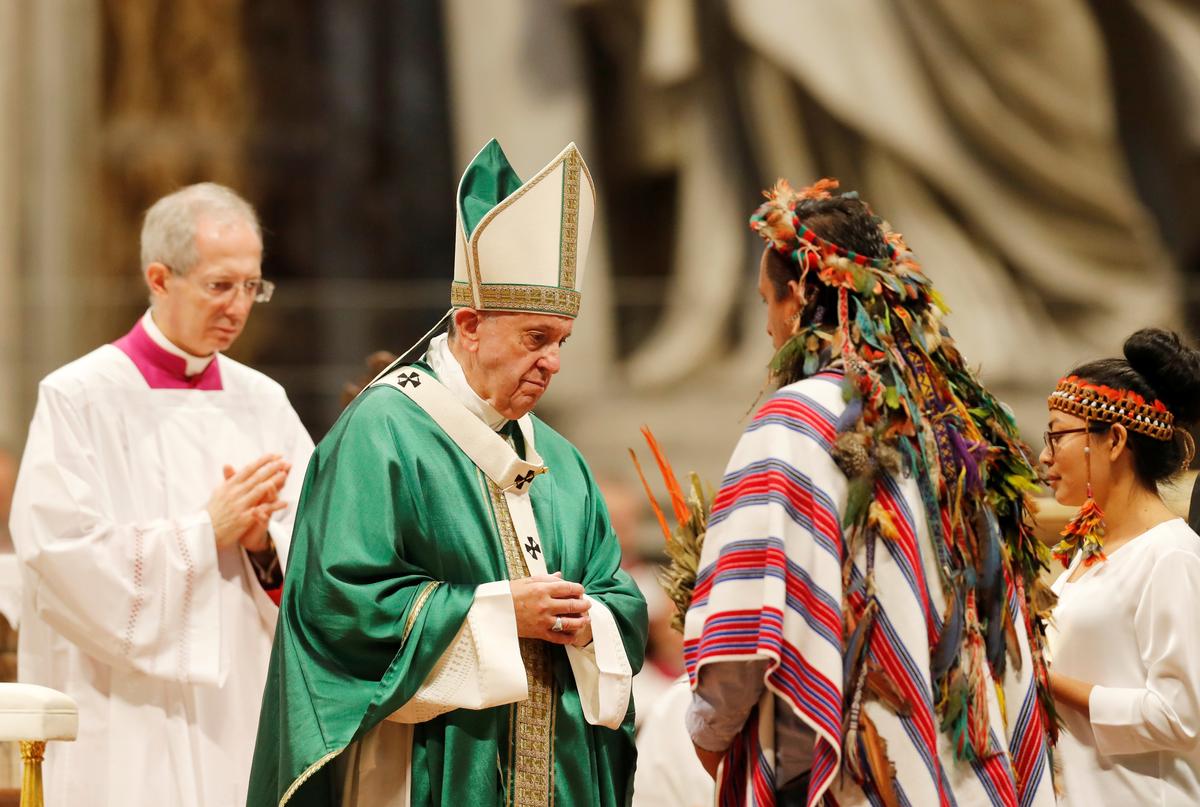 VATICAN CITY (Reuters) – Pope Francis on Sunday called for an end to the plundering of the Amazon basin, as he closed an assembly of Roman Catholic bishops who discussed the challenges the Church faces in the region.

Pope Francis leads a Mass to close a three-week synod of Amazonian bishops at the Vatican, October 27, 2019. REUTERS/Remo Casilli

The work of the assembly, known as a synod, ended on Saturday night with a final document containing a proposal that married men in the remote area be allowed to be ordained as priests.

The milestone proposal could lead to a landmark change in the Church’s centuries-old discipline of celibacy.

One of the other themes of the three-week synod was the environmental protection of the Amazon and respect for its indigenous peoples and their cultures.

In his sermon at a closing Mass in St. Peter’s Basilica, Francis criticized those who consider indigenous people “backward and of little worth” instead of acknowledging what their cultures can teach others.

“They despise their traditions, erase their history, occupy their lands, and usurp their goods. How much alleged superiority, transformed into oppression and exploitation, exists even today!” he said.

“The mistakes of the past were not enough to stop the plundering of other persons and the inflicting of wounds on our brothers and sisters and on our sister Earth: we have seen it in the scarred face of the Amazon region,” he said.

The synod’s final document warned of the risks to the Amazon basin from mining and deforestation, which scientists say increases the threat of global warming.

The bishops proposed that the Church define what would constitute the “ecological sin” of harming the environment and also introduce specific ministries for the care of nature.

The pope will consider the proposals, including an expanded role for women, in writing his own document, known as an Apostolic Exhortation. He said he hopes to have it ready by the end of the year.

At the Mass, attended by indigenous people from the Amazon, Francis also appeared to take a swipe at conservatives who have attacked parts of the synod’s working document as heretical.

Opponents of Francis, inspired by the writings of two cardinals, held several side events during the synod. They took particular umbrage at the use of an indigenous statue of a pregnant woman at an opening event, saying that was pagan.

The pope asked forgiveness for what he considered an insult to the indigenous after ultra-conservative Catholic militants stole replicas of the statue and dumped them into the Tiber River.

In his sermon, Francis spoke of “those masters of the art of self-justification” and those seeking “self-canonization.”