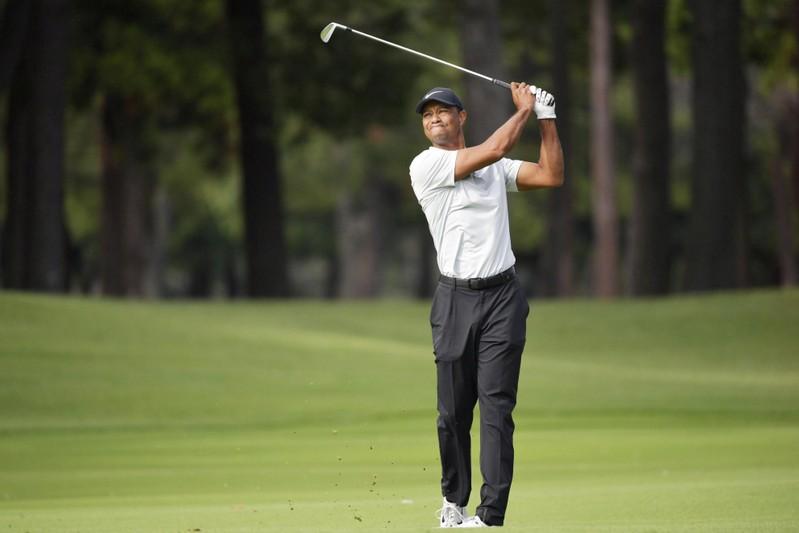 Tiger Woods shoots on the 9th hole during the second round of the Zozo Championship, a PGA Tour event, at Narashino Country Club in Inzai, Chiba Prefecture, east of Tokyo, Japan October 26, 2019, in this photo released by Kyodo. Mandatory credit Kyodo/via REUTERS

Woods will resume on Monday morning at 18 under-par after 11 holes of his final round at Narashino Country Club, while local favourite Matsuyama will resume at 15 under with six holes left.

Nobody else is closer than six shots in what is realistically a two-horse race.

But what had seemed like turning into a victory procession for Woods suddenly got a little bit interesting when Matsuyama notched two consecutive birdies to end the day on a high note.

“I played alright,” said an understated Woods. “I made a few mistakes here and there. Pretty pleased with most of the day and I made birdies when I had opportunities.”

Asked if he would allow himself to think of matching Snead’s record, Woods did not bat an eyelid: “I’m trying to win, no doubt about that,” he said.

It was a marathon day for the entire field, more than 10 hours and at least 29 holes before darkness forced the suspension of play, and certainly a stern test for a 43-year-old in his first event since undergoing arthroscopic surgery on his left knee.

But Woods passed with flying colours and then some in front of an enthusiastic but exceedingly polite sellout crowd that had its loyalties split between the 15-times major champion and Japan’s top player.

Saturday’s second round was completed behind closed doors sans spectators due to some muddy conditions but the course was remarkably dry on Sunday, with a few damp spots but nothing more.

The greens remained extremely soft, allowing players to fire aggressively at the pins.

Woods shot 66 in the third round on Sunday morning and had a three-shot lead over Matsuyama after 54 holes.