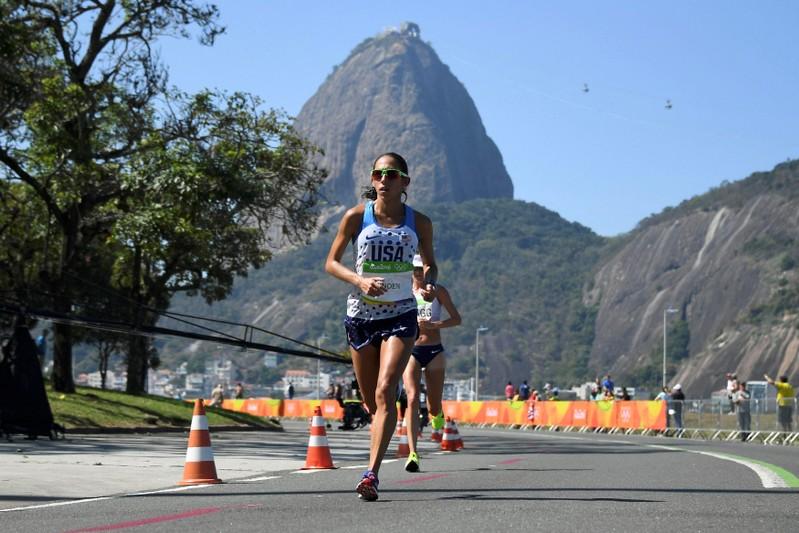 (Reuters) – Des Linden may not be the favorite going into Sunday’s New York City Marathon but the gutsy American still has high hopes given that she knows better than most elite runners how quickly things could turn in her favor.

After a slew of near misses in top races, Linden enjoyed a career-defining moment at the 2018 Boston Marathon where she thrived under harsh conditions to become the first American woman in 33 years to win the prestigious race.

Breaking the soggy tape on Boylston Street remains the crowning moment of Linden’s career but the 36-year-old remains anything but complacent as she gets set to run through all five of New York City’s boroughs.

“I still have some really good stuff and if things fall into place I can see myself challenging for a win,” Linden told Reuters in a telephone interview. “Even when I was at my best it takes a really special day.”

For Linden, that day came in Boston on the type of race morning that most runners dread. As a handful of elite runners dropped out, Linden slogged her way through frigid headwinds and sideways rain for the biggest win of her career.

Linden trains in northern Michigan and so is well accustomed to harsh weather. She is actually happier the worse the running conditions are and feels she has an edge over her competitors if the weather turns nasty on Sunday.

“I am ready for anything that gets thrown at me and I don’t think that’s the case with quite a few of the professional runners,” said Linden.

“It’s kind of a horrible thing to wish for. If it’s perfect out that’s great too, but it certainly improves my chances if it’s nasty out.”

Last year, in only her second appearance in the New York City Marathon, Linden finished in sixth place. She finished fifth in her New York debut in 2014.

Linden said her triumph in Boston was followed with an exhausting post-marathon blitz of media interviews and race appearances that took a mental toll leading up to New York, where this year she is targeting a podium finish.

“Last year was so tough coming off that Boston win and it’s the most exciting thing but it’s also a lot of extra work,” said Linden. “There’s a lot more commitments on your plate and appearances and so on and so forth.

“In terms of just mental energy levels I am just in a much better place this year.”

A two-time Olympian, Linden will wait to see how her mind and body respond after running New York before making a decision on whether she will vie for a spot on the U.S. team for the 2020 Tokyo Games.

But the way Linden sees it, she already got her Olympic redemption at the 2016 Rio Games where she came in seventh place four years after heartbreak in London where she dropped out early with a stress fracture.

“I feel like to a degree it’s not such a motivating force this time around because I feel fairly accomplished there,” said Linden. “The medals take a pretty special effort and I don’t know if I have that in me right now. But we’ll see.”

For now, Linden’s focus is solely on New York, where she knows she will need another perfect storm to be the first runner to cross the finish line in Central Park.

“You have to be as fit as ever, 100% healthy and for me have some things fall into place the right way,” said Linden.

“The odds of all those hitting again, particularly when I am 36, are slim but also we’ve seen it happen so I wouldn’t count myself out by any means.”

Reporting by Frank Pingue in Toronto, editing by Pritha Sarkar