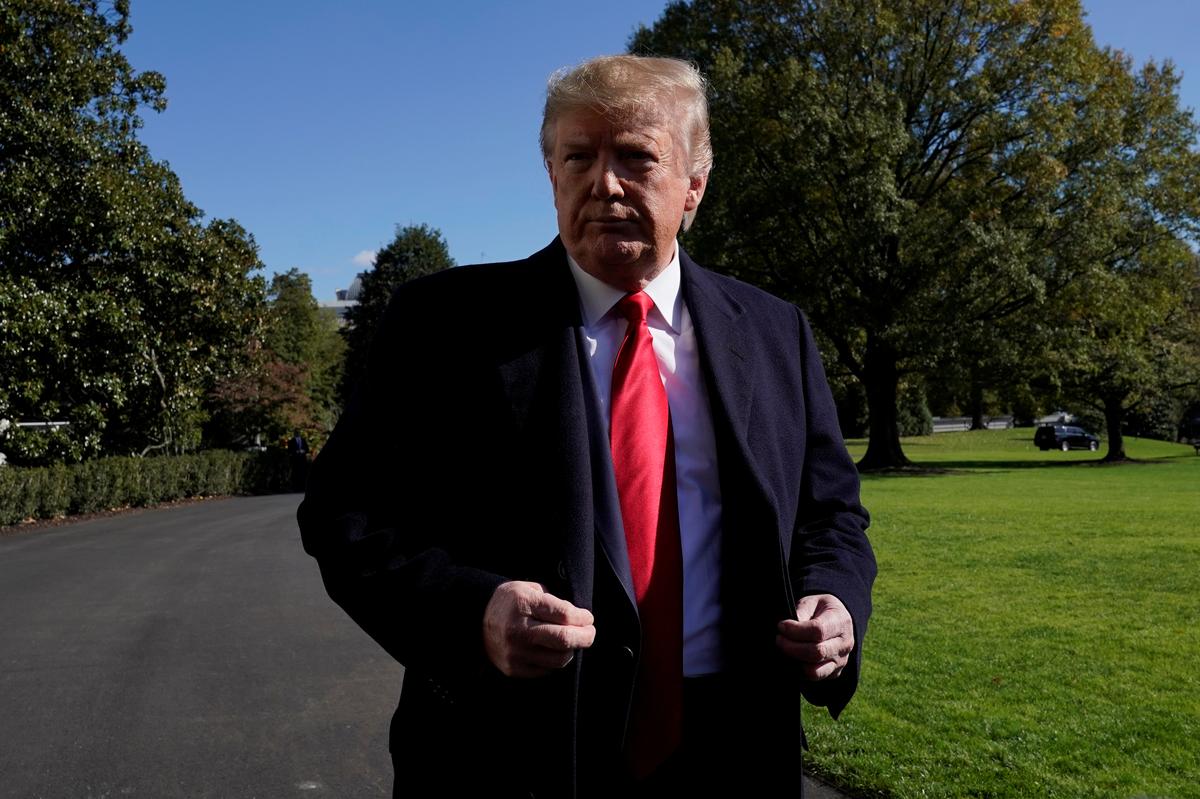 WASHINGTON (Reuters) – Some witnesses called to testify in the impeachment inquiry into U.S. President Donald Trump on Monday and later this week are defying Democratic lawmakers’ requests to appear in closed door hearings before the investigation moves into its public phase.

U.S. President Donald Trump speaks to the media on the South Lawn of the White House in Washington upon his return from New York, U.S., November 3, 2019. REUTERS/Yuri Gripas

Trump loyalists have refused to appear before Democratic-led committees in the U.S. House of Representatives, ramping up the tussle between the White House and lawmakers over their power to conduct investigations. Some Democrats say Republican Trump, who has ordered administration officials not to cooperate, should face an obstruction of justice charge among the impeachment counts they plan to consider against him.

Three White House budget officials, including the acting budget director, are refusing to appear, a senior Trump administration official said. Their testimony is considered critical to helping determine whether Trump used foreign aid as leverage to secure a political favor.

Another important witness slated for Monday is John Eisenberg, the top lawyer for the White House National Security Council. Lawmakers are especially interested in questioning him about a July 25 phone call in which Trump asked Ukrainian President Volodymyr Zelenskiy to investigate Trump’s political rival Joe Biden, a former vice president and contender for the Democratic Party nomination to run against Trump in the November 2020 election.

Eisenberg decided to take the unusual step of moving a transcript of the call into the White House’s most classified computer system, according to a person familiar with last week’s testimony by Army Lieutenant Colonel Alexander Vindman, who listened in on the call.

A few days after the call, Eisenberg also told Vindman not to discuss the matter, said the source, speaking on condition of anonymity.

Vindman testified that he found it improper to demand that a foreign government investigate a U.S. citizen and was so worried about the implications that he took the matter to Eisenberg.

“There is no reason to call witnesses to analyze my words and meaning,” Trump tweeted on Monday.

Separately, Trump on Monday dismissed an offer by the anonymous U.S. official whose whistleblower complaint triggered the impeachment inquiry to answer Republican lawmakers’ questions in writing.

On Sunday, lawyers for the whistleblower offered to communicate directly with Republicans, who have followed Trump’s lead in pressuring the official to come forward publicly.

The official, a member of a U.S. intelligence agency, has not been identified in keeping with longstanding practice to protect whistleblowers.

“He must be brought forward to testify. Written answers not acceptable!” Trump tweeted.

The impeachment inquiry focuses on Trump’s request in the July phone call for Zelenskiy to investigate Biden and his son Hunter Biden, who was once on the board of a Ukrainian energy company.

Trump made his request after withholding $391 million in security aid approved by Congress to help Ukraine fight Russian-backed separatists in eastern Ukraine.

The House investigation is probing whether Trump misused the power of his office and, if so, whether that amounted to “high crimes and misdemeanors” that merit impeachment and removal from office under the Constitution.

Trump has denied any wrongdoing and defended his Zelenskiy call as “perfect,” accusing Democrats of unfairly targeting him.

Democrats are expected to wrap up the closed-door testimony in coming weeks and begin public hearings.

A parade of current and former U.S. officials have testified that the White House went outside normal diplomatic channels to pressure Zelenskiy. Some appeared in defiance of Trump’s orders, while others have resisted testifying, which critics have called an attempt to stonewall the proceedings.

The White House has declined to comment on whether Eisenberg and Blair would appear.

However, three other officials – the White House Office of Management and Budget acting director Russ Vought and two of his deputies, Michael Duffey and Brian McCormack – will not appear for questioning scheduled for Monday and Tuesday, the administration official said on condition of anonymity.

Democratic committee members have also asked former national security adviser John Bolton, who Trump fired in September, to appear on Thursday. Others have testified that Bolton was alarmed by the effort to pressure Zelenskiy. Bolton’s lawyer has said he is not willing to testify unless a subpoena is issued.