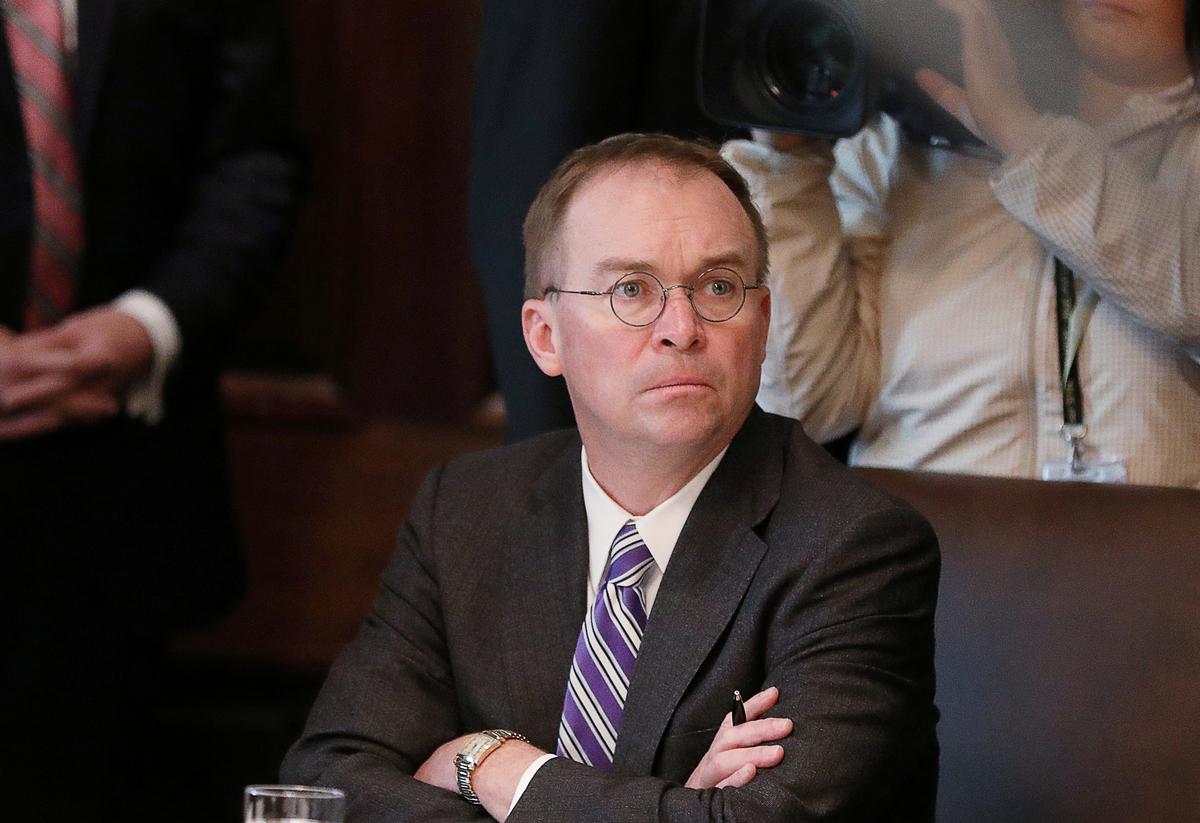 WASHINGTON (Reuters) – Acting Chief of Staff Mick Mulvaney and another White House official on Friday failed to appear at the Democratic-led impeachment inquiry into President Donald Trump, as the administration continued to blockade investigators.

Mulvaney, who is also director of the White House’s Office of Management and Budget (OMB), had been issued a subpoena to testify by the House of Representatives Intelligence Committee, one of three panels investigating whether Trump pressured Ukraine for help against a political rival.

Mark Sandy, associate director for national security programs at OMB, also was called to testify and did not show up.

Lawmakers wanted to question the two officials about their knowledge of OMB’s decision last summer to block, without explanation to Congress, nearly $400 million in security aid for Ukraine that had been approved by lawmakers.

Investigators are trying to determine whether Trump made the release of the aid contingent on Ukrainian President Volodymyr Zelenskiy agreeing to launch an investigation of Hunter Biden, the son of former U.S. Vice President Joe Biden, one of Trump’s main Democratic rivals as he runs for re-election in 2020.

Hunter Biden was on the board of directors of Burisma, a Ukrainian gas company.

Mulvaney acknowledged at an Oct. 17 news conference that the White House had withheld the assistance. “I have news for everybody: Get over it. There is going to be political influence in foreign policy,” Mulvaney said, although he later contradicted himself, saying in a White House statement: “There was absolutely no quid pro quo.”

Trump’s defenders say there is no evidence of him and the Ukrainian president engaging in a quid pro quo – or exchanging a favor for a favor – because the aid to Ukraine was released and Zelenskiy never explicitly promised to investigate Burisma, the Bidens, or any Ukraine involvement in the 2016 election.

A quid pro quo is not necessary, however, to prove high crimes or misdemeanors, which is the standard the U.S. Constitution requires for the impeachment of a president.

A White House spokesman said earlier this week that Mulvaney did not intend to comply with the request to appear at the impeachment inquiry.

Mulvaney, who is Trump’s top aide, also ignored an Oct. 4 subpoena from the House committees to provide documents for the investigation.

The White House, claiming executive privilege, has argued that any official close to the president should not have to provide depositions to congressional investigators.

So far, most officials who work in the executive branch have declined to cooperate with the investigation, although an adviser to Vice President Mike Pence appeared as requested on Thursday.

Mulvaney’s outside counsel informed investigators on Friday that his client had been directed by the White House not to comply with the subpoena and asserted “absolute immunity,” a congressional aide said.

The three committees are wrapping up the closed-door phase of their investigation before open hearings start next Wednesday with testimony from two diplomats who have been interviewed behind closed doors, William Taylor, the top U.S. diplomat in Ukraine, and Deputy Assistant Secretary of State George Kent.

This week, the committees have been releasing transcripts of the closed-door interviews, including with Taylor, Kent and former U.S. Ambassador to Ukraine Marie Yovanovitch, who appears at a public hearing on Nov. 15. Trump abruptly recalled Yovanovitch as ambassador in May.

The president has denied wrongdoing and disparaged the investigation, which was triggered by a whistleblower complaint, as a politically motivated “witch hunt.”

“I’m not concerned about anything. The testimony has all been fine. I mean for the most part I never even heard of these people. I have no idea who they are,” Trump told reporters at the White House on Friday.

Another transcript release is expected on Friday, although the committees declined to say which it would be.

Attention will soon turn to the public hearings featuring U.S. officials testifying in Congress, which are likely to be a prelude to articles of impeachment – formal charges – against Trump being brought to a vote in the House.

Representative Rick Crawford has volunteered to step aside from the House intelligence committee so that Representative Jim Jordan, another Republican and an aggressive Trump defender, could serve on the panel during the public impeachment inquiry hearings next week, a House Republican aide said.

If the Democratic-controlled House votes to impeach Trump, the Republican-controlled Senate would then hold a trial on whether to remove him from office. Senate Republicans have so far shown little appetite for ousting the president.

The impeachment battle could crowd out other issues like the economy and immigration as voters turn their minds to the November 2020 election.