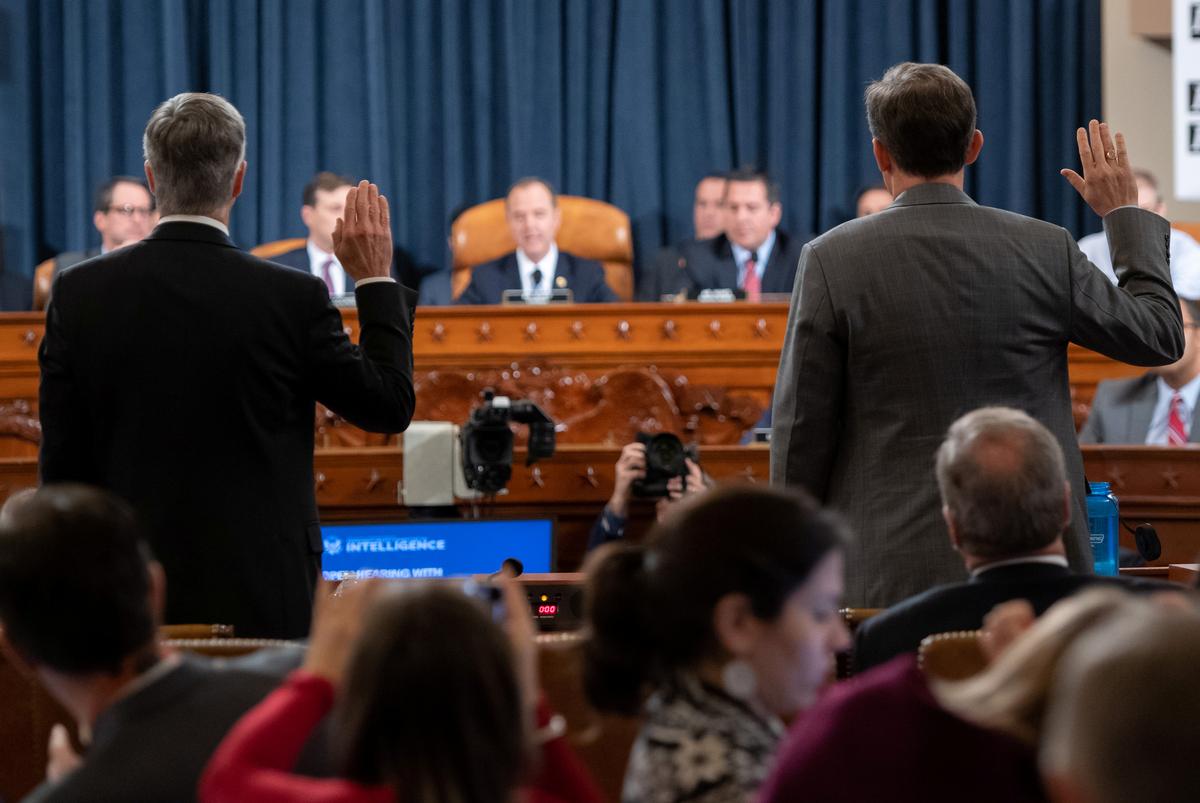 Democrats leading the U.S. House of Representatives probe have summoned three U.S. diplomats – all of whom have previously expressed alarm in closed-door testimony about Trump’s dealings with U.S. ally Ukraine – to detail their concerns under the glare of wall-to-wall news coverage this week. The public hearings are scheduled for Wednesday and Friday.

With a potential television audience of tens of millions looking on, Democratic Representative Adam Schiff, chairman of the House of Representatives Intelligence Committee, opened the historic session – the first impeachment spectacle in two decades – in an ornate hearing room packed with journalists, lawmakers and members of the public.

Schiff’s accusations that Trump abused his power was met by a staunch denial by the panel’s senior Republican, Devin Nunes, of the Republican president’s complicity in a saga that revolves around whether Trump and his aides improperly pressured Ukraine to dig up dirt on a political rival for his political benefit.

The day’s two witnesses – William Taylor, the top U.S. diplomat in Ukraine, and George Kent, the deputy assistant secretary of state for European and Eurasian affairs – followed with opening statements echoing their earlier closed-door testimony about their alarm over efforts to get Ukraine to open an investigation of former Vice President Joe Biden, a leading contender for the Democratic nomination for the 2020 election.

“The questions presented by this impeachment inquiry are whether President Trump sought to exploit that ally’s vulnerability and invite Ukraine’s interference in our elections,” Schiff said in his opening statement.

“Our answer to these questions will affect not only the future of this presidency, but the future of the presidency itself, and what kind of conduct or misconduct the American people may come to expect from their commander-in-chief,” Schiff said.

Schiff added, “If this is not impeachable conduct, what is?”

This week’s hearings, where Americans are hearing directly for the first time from people involved in events that sparked the congressional inquiry, may pave the way for the Democratic-led House to approve articles of impeachment – formal charges – against Trump.

That would lead to a trial in the Senate on whether to convict Trump of those charges and remove him from office. Republicans control the Senate and have shown little support for Trump’s removal.

Nunes accused the Democrats of conducting a “carefully orchestrated smear campaign” and of using the hearings as a “televised theatrical performance.”

He hewed to the Republican strategy of arguing that Trump did nothing wrong or impeachable when he asked Ukraine’s new president to investigate prominent Democrat Joe Biden, a former U.S. vice president and key 2020 re-election rival.

“It’s nothing more than an impeachment process in search of a crime,” Nunes said.

Schiff said the inquiry looks at whether Trump sought to condition official acts such as a White House meeting or U.S. military assistance on Ukraine’s willingness to carry out two political investigations that would help his re-election campaign.

“And if President Trump did either, whether such an abuse of his power is compatible with the office of the presidency?” Schiff asked.

The focus of the inquiry is on a July 25 telephone call in which Trump asked Ukrainian President Volodymyr Zelenskiy to open a corruption investigation into Biden and his son Hunter Biden and into a discredited theory that Ukraine, not Russia, meddled in the 2016 U.S. election. Hunter Biden had worked for a Ukrainian energy company called Burisma.

Democrats are looking into whether Trump abused his power by withholding $391 million in security aid to Ukraine – a vulnerable U.S. ally facing Russian aggression – as leverage to pressure Kiev into conducting investigations politically beneficial to Trump. The money – approved by the U.S. Congress to help Ukraine combat Russia-backed separatists in the eastern part of the country – was later provided to Ukraine.

For a graphic version of the impeachment inquiry, click: here

The witnesses were up next. Taylor, a career diplomat and former U.S. Army officer, previously served as U.S. ambassador to Ukraine and is now the chargé d’affaires of the U.S. embassy in Kiev. Kent oversees Ukraine policy at the State Department.

Ukrainian Ambassador William Taylor (L) and Deputy Assistant Secretary George Kent are sworn-in prior to testifying during the first public hearings held by the House Permanent Select Committee on Intelligence as part of the impeachment inquiry into U.S. President Donald Trump, on Capitol Hill in Washington, DC, U.S., November 13, 2019. Saul Loeb/Pool via REUTERS

“I do not believe the United States should ask other countries to engage in selective, politically associated investigations or prosecutions against opponents of those in power, because such selective actions undermine the rule of law regardless of the country,” Kent said.

Taylor said he found two channels of U.S. policy toward Ukraine – one regular and one “highly irregular” – and recounted how a Trump meeting with the Ukrainian president was improperly conditioned on Kiev agreeing to investigate Burisma, where Biden’s son had been a board member, and the debunked notion of Ukrainian interference in the 2016 election.

Taylor said he became aware that a hold on the security aid was contingent Ukraine opening the investigations.

In a fresh disclosure, Taylor said his staff told him about a July 26 conversation that U.S. Ambassador to the European Union Gordon Sondland had with Trump following Sondland’s meeting with a Zelenskiy adviser, and that Sondland afterward said Trump cared more about the Biden investigations pushed by his personal lawyer Rudy Giuliani.

In the last U.S. impeachment drama, Republicans, who then controlled the House, brought impeachment charges against Democratic President Bill Clinton in a scandal involving his sexual relationship with a White House intern. The Senate ultimately voted to keep Clinton in office.

Only two U.S. presidents ever have been impeached. No president has been removed through the impeachment process.

Trump has denied any wrongdoing, derided some of the current and former U.S. officials who have appeared before committees as “Never Trumpers” – a term referring to Republican opponents of the president who he has called “human scum” – and branded the investigation a witch hunt aimed at hurting his re-election changes.

Before the start of the hearing, Trump continued to raise doubts about the witnesses’ loyalties, tweeting “NEVER TRUMPERS” and reiterating a refrain echoed by his political supporters: “READ THE TRANSCRIPT.”

Taylor testified he had been concerned to learn that security aid to Ukraine, as well as a White House meeting between Trump and Zelenskiy, had been delayed for political reasons.

Kent said he had been alarmed by efforts by Giuliani and others to pressure Ukraine. Kent said Giuliani – who Democrats have accused of conducting a shadow foreign policy effort in Ukraine to benefit the president – had conducted a “campaign full of lies” against Marie Yovanovitch, who was abruptly pulled from her post as U.S. ambassador to Ukraine in May. She will give public testimony on Friday.

Democrats are hoping to convince independent voters and other doubters that Trump was wrong not only in asking Ukraine to dig up dirt on his rival but in making it a “quid pro quo” – a Latin meaning a favor in exchange for a favor.

Republicans want to paint the hearings as a partisan exercise by Trump’s opponents who resented failing to gain more politically from former Special Counsel Robert Mueller’s investigation that detailed Russian interference in the 2016 election to boost Trump’s candidacy. Mueller documented extensive contacts between the Trump campaign and Russia but found insufficient evidence to prove a criminal conspiracy.