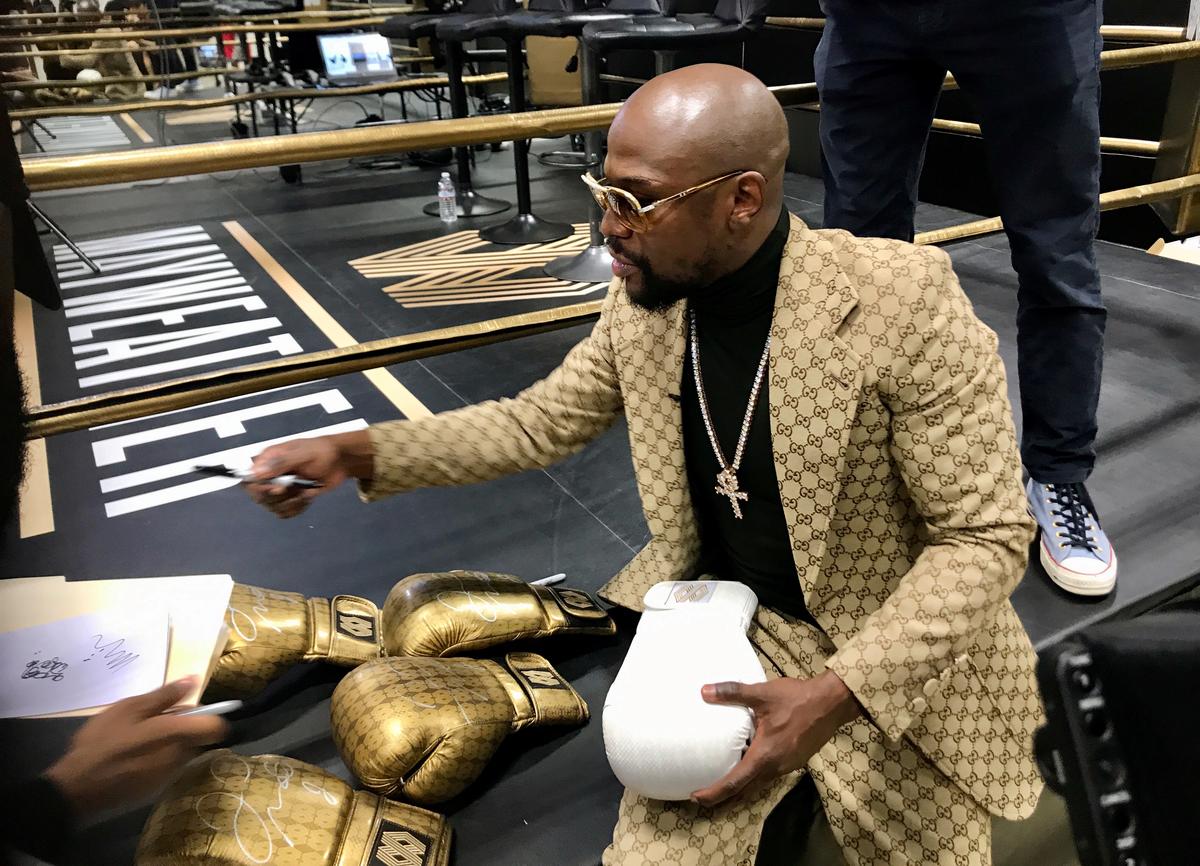 TORRANCE, Calif. (Reuters) – Boxing great Floyd Mayweather said his time in the ring is finished and that he is focused on other projects including his fast-growing chain of boxing fitness gyms and his high-profile promotion company.

The 42-year-old American, who has retired in the past only to be drawn back for another colossal payday, said he is content to hang up his gloves with an unblemished 50-0 record.

“I’ve got calls to get back into the ring, but my health is my wealth,” Mayweather told Reuters at the recent opening of a Mayweather Boxing + Fitness gym in Torrance, California.

“Boxing is a very, very brutal sport. In the last few years a lot of fighters have died inside that squared circle.”

American Patrick Day died in October as a result of a traumatic brain injury he suffered when he was knocked out and two professional fighters perished within a week’s time in July from damage sustained during their bouts.

“You have got to know when to hang it up. I had a great career,” he said, throwing cold water on the prospects of a rumored rematch against Manny Pacquiao or Canelo Alvarez next year.

Mayweather, who won the first of his 12 world titles in 1998, first announced his retirement in 2007 but quickly returned to the ring.

He retired again in 2015 only to come back to defeat mixed martial artist Conor McGregor in 2017. After that battle he said his professional career was truly over.

He is, however, still open to participating in exhibition matches like the one he did in January, where he demolished Japanese kickboxer Tenshin Nasukawa in less than three minutes.

“I’ll still travel and do exhibitions. I make great money doing exhibitions — between $10 and $30 million,” he said of the fights, which have no bearing on his professional record.

“I think I make more doing that than most fighters make fighting.”

Mayweather said he still loves the sport and is passionate about sharing that love through his growing network of gyms, which combine traditional group fitness exercise with boxing techniques modeled after his own workouts.

Mayweather, who arrived to the red carpet in Torrance sporting a crisp beige suit and diamond-encrusted aviator sunglasses, said the idea was simple — have fun and feel good.

“We want you to come here, burn calories, be positive and have fun and in due time we will see the great results,” he said, adding that boxing is not only a great workout but also an excellent way for people to vent their frustrations.

“If you had a bad day at work, come here,” said Mayweather while sitting on the side of a ring at the center of the gym.

“Let some steam off, hit the heavy bag, run a little bit.”

“Exercising in groups is fun. It’s like they are part of the Money Team,” he added, referring to his popular fashion and lifestyle brand.

The Torrance facility was the fourth Mayweather + Fitness franchise to open in the U.S. and, with the backing of venture capital firms, the company hopes to expand to 50 locations by the end of next year.

Another priority is Mayweather Promotions, which is currently hyping the anticipated rematch between Cuban slugger Luis Ortiz and WBC heavyweight champion Deontay Wilder, which will be held in Las Vegas on Saturday.

Asked to make a prediction for the fight, Mayweather demurred.

“They are both great fighters. My prediction is, tune in,” he said with a laugh.

Despite the rise of mixed martial arts and other combat sports, Mayweather said boxing reigns supreme because of its rich history and ability to produce legendary champions.

“I never call myself a celebrity,” he said.

“I’m a legendary icon because when I’m long gone they will still be talking about me.”

Mayweather said that when he boxed McGregor, it was the most money any MMA fighter had ever earned for a single fight.

“We gave the MMA sport a boost,” he added.

“Eventually I will move on to build my brand in MMA but for right now I’m in boxing, and boxing will always be at the top as long as I’m involved.”

Floyd Mayweather poses for photos on the red carpet at the opening of the Mayweather Boxing + Fitness gym in Torrance, California, U.S. November 16, 2019. REUTERS/Rory Carroll

If it truly is the end of the road for Mayweather as a boxer, he said he leaves with no regrets.

“My career went great,” he said.

“I’m happy with how everything played out.”