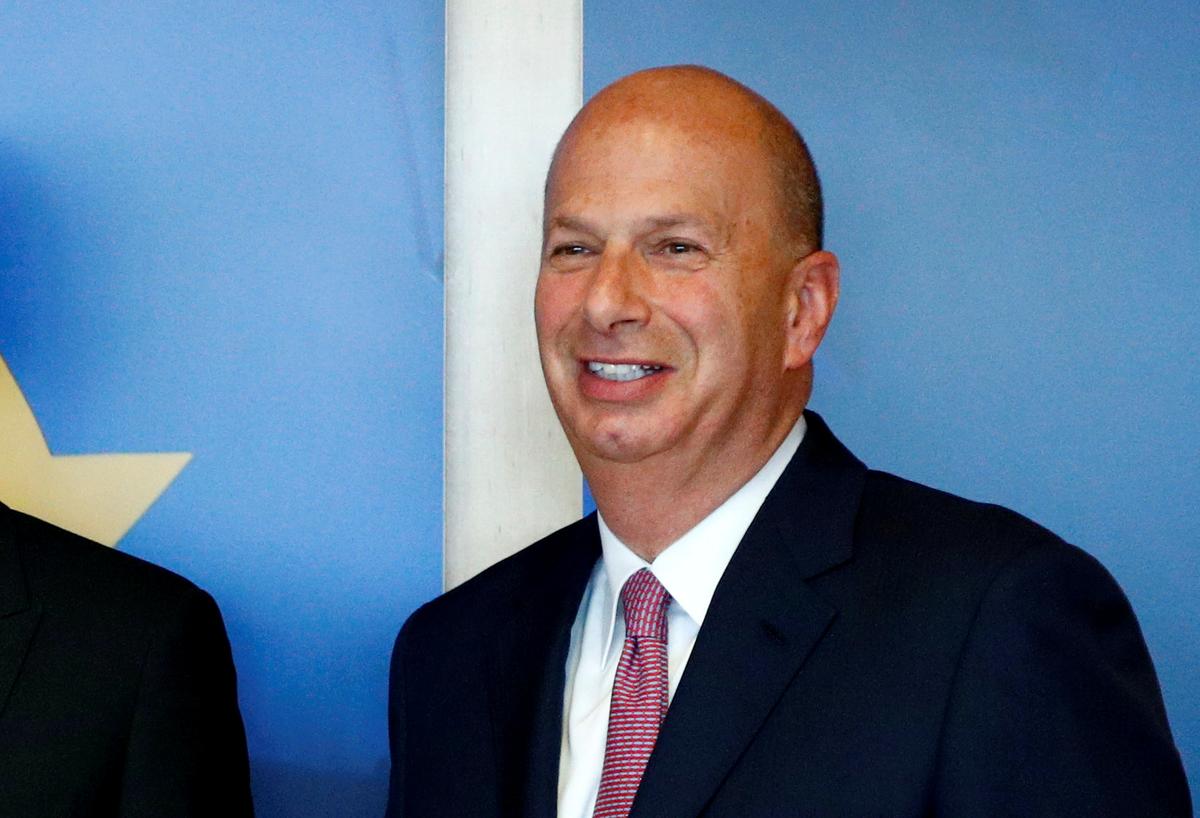 (Reuters) – The U.S. Ambassador to the European Union, Gordon Sondland, will on Wednesday become the first witness with a direct line of communication to President Donald Trump to testify in public to the Democratic-led impeachment inquiry.

Sondland spoke to Trump half a dozen times from mid-July to mid-September, according to the testimony of other witnesses, and could shed light on whether Trump abused his power by making U.S. security aid to Ukraine contingent on Kiev’s agreement to investigate Burisma, an energy company on which Hunter Biden, the son of former Vice President and political rival Joe Biden, had served as a board member.

He will likely face tough questioning from Democratic and Republican lawmakers at the U.S. House of Representatives Intelligence Committee hearing following his revision of previous closed-door testimony to say there was a link between $391 million in aid that was withheld and the investigations Trump wanted. Initially, he testified that he knew of no preconditions to the assistance.

Here are some questions about Sondland and his importance to the impeachment inquiry:

WHAT ROLE HAS SONDLAND PLAYED IN U.S. RELATIONS WITH UKRAINE?

Sondland was one of three officials who largely took over U.S.-Ukraine policy in May. Career U.S. diplomats have portrayed Sondland in their testimony as a central figure in what became a shadow Ukraine policy operation, undercutting official channels and pressing Kiev to investigate the Bidens.

Ukraine is not part of the European Union but aspires to membership, making Ukraine issues part of Sondland’s official remit. But his involvement was viewed as a problem by some White House National Security Council (NSC) officials.

WHAT MIGHT SONDLAND BE ASKED TO TELL THE INQUIRY ABOUT TRUMP AND UKRAINE?

Democrats have heard testimony that Sondland has had frequent contact with Trump and can provide a first-hand account of Trump’s interest in pressing Ukrainian President Volodymyr Zelenskiy to announce an investigation into the Bidens. He will also face questions about the role of the president’s personal lawyer Rudy Giuliani in that effort.

Lawmakers are also likely to delve into one phone conversation between Sondland and Trump on July 26 in which a witness says Sondland reassured Trump the Ukrainians would agree to investigate the Bidens. The call took place the day after Trump’s phone conversation with Zelenskiy that is at the heart of the inquiry.

David Holmes, a U.S. embassy staffer, testified that Sondland told him after the July 26 call that Trump only cared about “big stuff” in Ukraine, like “the Biden investigation.”

He may also be asked about a July 10 White House meeting where, according to the testimony of one NSC official, Sondland made clear that the Ukrainians would have to agree to investigate the Bidens, as well as Burisma, for Zelenskiy to get an Oval Office meeting with Trump.

HOW HAS SONDLAND’S STORY CHANGED?

Sondland told lawmakers during closed door testimony in October that he did not know about any preconditions on U.S. security aid to the Ukraine government, which was approved by Congress to help it fight Russian separatists in eastern Ukraine.

But on Nov. 4, he sent the congressional committees an addendum, saying statements from other witnesses had refreshed his recollection about certain conversations from early September.

In his addendum, he said he now remembered that he had told an aide to the Ukrainian president in early September that the United States “likely” would not send the aid until Ukraine provided an anti-corruption statement they had been discussing.

Sondland referred to prepared testimony by William Taylor, the top diplomat in Ukraine, about a conversation he had with Tim Morrison, a former National Security Council official. In that conversation, according to Taylor, Sondland told an aide to the Ukrainian president that the security money would not come until Ukraine agreed to investigate Burisma.

Sondland also did not recall his July 26 phone conversation with Trump in his original testimony. A person familiar with the matter said he intends to address the issue on Wednesday.