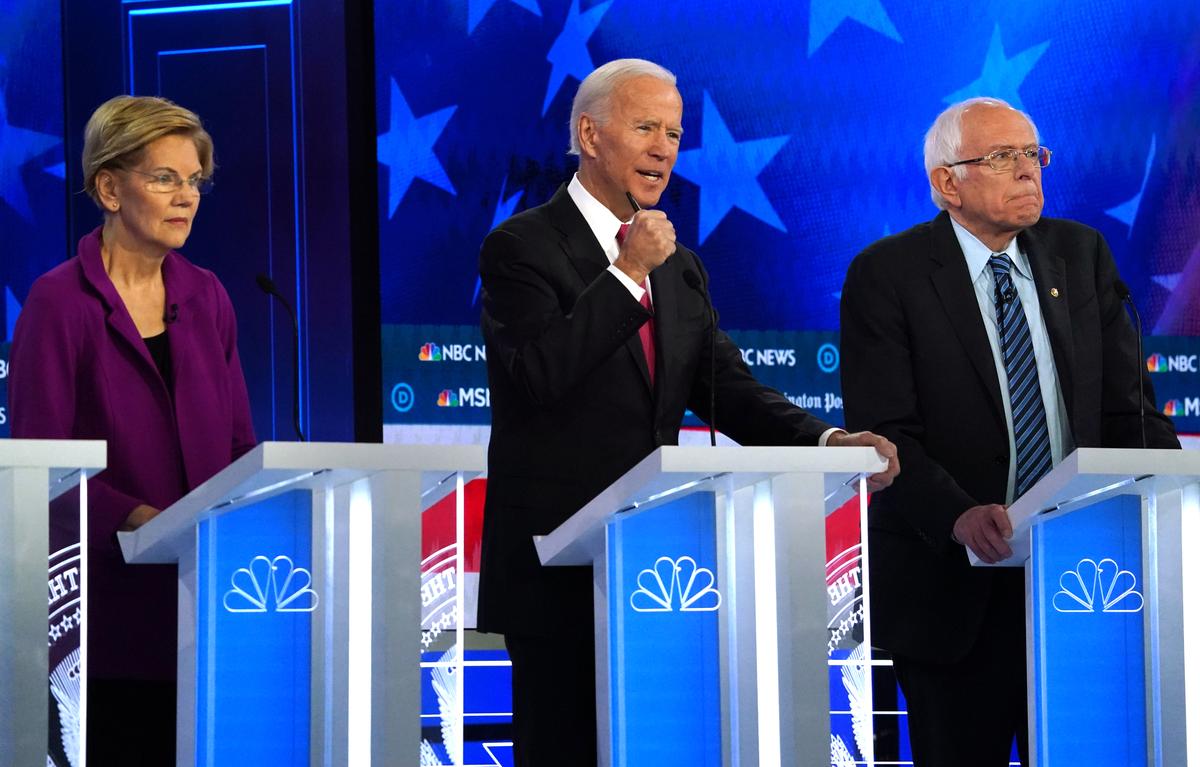 ATLANTA (Reuters) – Democratic White House contenders united in supporting the impeachment inquiry against Republican President Donald Trump at a debate on Wednesday that featured differences on policy details but few of the bitter attacks on one another that marked earlier encounters.

During the fifth debate in the Democratic race to pick a challenger to Trump in the November 2020 election, the 10 candidates aired differences on healthcare and taxing the wealthy, but kept the exchanges largely polite and instead heaped heavy criticism on Trump.

U.S. Senator Elizabeth Warren, the progressive who has pushed ambitious plans to tax wealth and create a government-run healthcare plan, and Pete Buttigieg, the 37-year-old mayor of South Bend, Indiana, who has been rising in the polls, escaped sustained criticism from their rivals.

Buttigieg, running to be the first openly gay president, was pressed on his failure to make inroads with African-Americans – a key Democratic constituency – and drew a parallel to his experience being gay.

He also defended his relative lack of experience, saying it was not traditional establishment Washington experience but “the right experience to take on Donald Trump.”

U.S. Senator Amy Klobuchar, who had questioned if a woman with Buttigieg’s experience would make the debate stage, said he deserved his standing but there was a double standard when it came to women candidates.

“Otherwise we could play a game called ‘Name your favorite woman president,’” Klobuchar said. No woman has served as U.S. president.

She added: “If you think a woman can’t beat Trump, (House Speaker) Nancy Pelosi does it every day.”

Hours after the fourth day of public impeachment hearings in Congress, the candidates repeatedly blasted Trump and said the president’s efforts to press Ukraine to investigate former Vice President Joe Biden, a leading Democratic presidential contender, were an example of the administration’s corruption.

The Democratic-led House of Representatives has launched an impeachment inquiry into Trump’s bid to get Ukraine to investigate Biden and his son Hunter, who served on the board of Ukrainian gas company Burisma.

The candidates said Trump’s actions had forced lawmakers to hold him accountable.

“We have to establish the principle that no one is above the law, we have a constitutional responsibility and we need to meet it,” Warren said. An early supporter of Trump’s impeachment, she said she would try to persuade Senate Republicans that the president should be removed.

Warren, who is campaigning on the platform of getting money out of politics, also said that no donor would be appointed ambassador under her presidency. Gordon Sondland, a Trump donor and the U.S. ambassador to the European Union, testified on Wednesday he “followed the president’s orders” to carry out the pressure campaign against Ukraine.

“We are not going to give away ambassador posts to the highest bidder,” Warren said.

Asked if he would support a criminal investigation into Trump after he leaves the White House, Biden said he would leave it to the Department of Justice to decide whether Trump should be prosecuted for his actions.

“If that was the judgment, that he violated the law, and he should be in fact criminally prosecuted, then so be it. But I would not direct it, and I don’t think it’s a good idea that we mock, that we model ourselves after Trump and say: ‘Lock him up,’” he said.

Biden said he had learned something important from the impeachment inquiry.

“I learned, number one, that Donald Trump doesn’t want me to be the nominee. That’s pretty clear.”

The Democratic debate comes just 11 weeks before the first nominating contest in Iowa, on Feb. 3, raising the stakes for the participants as they tried to make an impression with voters before time runs out.

U.S. Senator Bernie Sanders criticized Trump for conducting foreign policy “in a tweet at 3 o’clock in the morning.”

The Democratic White House race has featured a three-way battle at the top of recent national polls between moderate Biden and progressive leaders Warren and Sanders.

But Buttigieg has taken the lead in two recent polls in Iowa and is also rising in New Hampshire, another early voting state.

Warren has seen some of her momentum stall as her candidacy has been consumed by questions about her ambitious plan to provide universal healthcare for all Americans without raising middle-class taxes one penny.

Biden, who calls for expanding the Affordable Care Act, former President Barack Obama’s signature healthcare law, said the “vast majority” of Democrats did not support Medicare for All, which would replace private health insurance with a single government-run plan.

“Right now, with Democrats, they couldn’t pass the House. Nancy Pelosi is one of those people who think it doesn’t make sense. We should build on Obamacare,” Biden said.

As in past debates, the candidates also disagreed on Warren’s proposal to raise taxes on the wealthy.

U.S. Senator Cory Booker said he also wanted to make the tax system more fair, but added the party needed to be “talking not just about how to tax wealth, but how to give more people opportunities to create wealth, to grow businesses, to have their American dream.”

Warren said her proposal to tax wealth rather than just income would not punish anyone.

“I’m tired of freeloading billionaires. I think it’s time that we ask those at the very top to pay more,” she said.