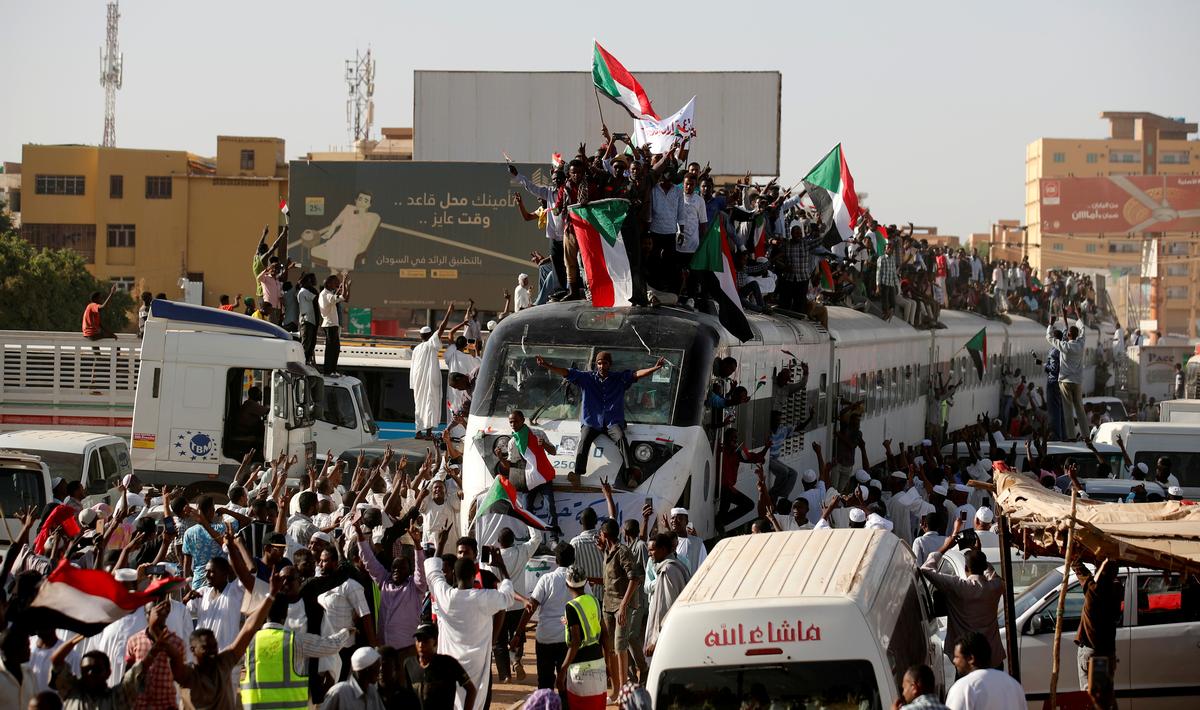 ATBARA, Sudan (Reuters) – Standing on the platform where he and other protesters packed a train to Khartoum in April to pressure Sudan’s military to share power with civilians, Abdelaziz Abdallah made clear the revolution driven by their city has much further to go.

A veteran railway worker-turned union leader, Abdallah was among the first to take to the streets in this labor stronghold in December, sparking a national uprising that toppled long-time ruler Omar al-Bashir almost four months later.

It took another four months for the military, which had ousted Bashir, to formally agree to a three-year power sharing deal with a civilian-led transitional government.

People in Atbara, a colonial-era railway hub, support the national government in the capital some 350 km (220 miles) to the south, but say some of the main grievances which drove their uprising – poor salaries and unemployment – remain.

“Railway workers have among the lowest state salaries” earning as little as 1,200 Sudanese pounds ($26.67) a month while needing at least 10,000 pounds to get by, said Abdallah, who took over the union after Bashir’s ouster.

They also want funds to revive the railway — once Africa’s longest network but now largely derelict.

They are tough demands for Prime Minister Abdalla Hamdok, who is trying to avert the collapse of an economy wrecked by three decades of mismanagement and U.S. sanctions.

Whether he can meet the expectations of thousands of railway workers will be a test for the whole country, as Atbara has been a hotbed of unrest since independence from Britain in 1956.

The protesters have formed resistance committees, which helped maintain the uprising and now want a say in their city.

Able to meet freely since bans on gatherings were lifted with Bashir’s fall, they discuss issues such as how to create jobs for the youth by trying to find farmland to grow crops.

But they also fume that the city is still run by a military governor. Bashir’s security network has lost some power but its officers remain in Atbara as elsewhere and soldiers, while no longer patrolling the streets, are stationed in nearby barracks.

“Nothing has changed for citizens and the youth. The civil service is still made up of the former regime,” said Adel Sheikh, a senior member of Atbara’s Forces for Freedom and Change coalition, the main umbrella group that negotiated the national power sharing deal with the generals.

Finding jobs is on many people’s minds.

“I hope to get a job as engineer,” said Mohamed Abdelathim, jobless since 2007. “State jobs under the (old regime) were for regime people,” he said.

Atbara, at the junction of the Nile and Atbara rivers, has been a barometer for Sudan since British colonialists established a railway hub here, building dozens of villas to house railway managers which now lie empty.

Workers here pushed for independence, formed the backbone of a powerful post-independence Communist Party and have risen up against various military rulers ever since, paying the price for their activism with mass dismissals.

Sudan has had only three brief three civilian governments, all toppled by generals who took over after saying that civilians had failed to fix an economy in crisis.

Hamdok is in a similar situation, heading a government shared with military. He wants to increase public salaries and compensate some 4,000 workers fired by Bashir but needs up to $5 billion in donor support for next year alone.

“Honestly we have fears (of a new coup) if the main issues aren’t solved,” said 70-year Ali Abdallah, a former national head of the railway union imprisoned under Bashir and now a respected figure among the townspeople.

The United States says it hopes to be able to lift sanctions imposed in 1993 over allegations Bashir’s Islamist government supported terrorism, so that donor money can flow.

Western countries are wary, but also fear that instability in Sudan will increase migration to Europe and encourage Islamist militants.

It will take time to heal local wounds.

“He was not political person but fed up with the regime and inflation,” said his father driving on pot-holed roads around Atbara to show its neglect.

He could not bring himself to go to the spot where his son got killed but stopped at the university where students have painted his face on a wall to keep memories fresh. There he struggled to hold back his tears.

“He sacrificed himself for a change in Sudan,” he said. “We will never forget.”