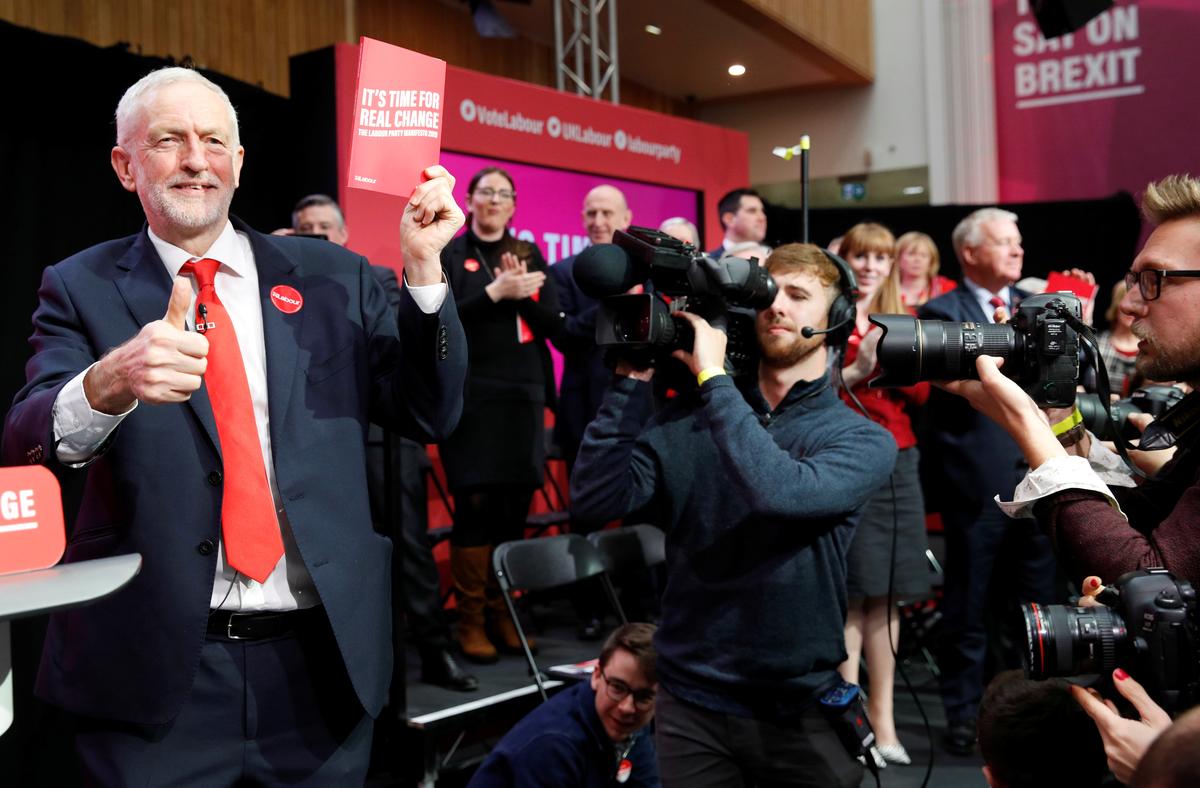 Leader of the Labour Party Jeremy Corbyn holds his party’s manifesto during its launch in Birmingham, Britain November 21, 2019. REUTERS/Phil Noble

Below are details of their economic strategy and the costings involved.

In total, this represents a 10% increase in spending compared with the last official forecasts from March.

This will be matched by an equivalent rise in taxes on companies, with an extra tax for multinationals such as Facebook and higher taxes on capital gains, dividends and employment income for high-earners, Labour’s plans showed.

Labour plans to eliminate the current budget deficit – the shortfall between government spending and income, excluding spending on investment – by the end of a rolling five-year forecast period.

Last year, Britain ran its first current budget surplus since 2001/02, but is on track to slip into deficit again.

Labour also aims to keep interest repayments on government debt below 10% of tax revenue – similar to its level in the last 2018/19 financial year.

But its plans also contained a big caveat: the fiscal rules would be suspended if the Bank of England decides to engage in more quantitative easing stimulus, or purchases of British government bonds.

They would also be suspended if the BoE tells the government that it no longer had the ammunition necessary to stabilise the economy.

Labour plans to reverse privatisations begun by former Conservative Prime Minister Margaret Thatcher in the 1980s by nationalising the electricity network, rail operators, Royal Mail and water utilities, as well as BT’s broadband network to provide free internet for all.

The party said the programme would be “fiscally neutral” by international accounting standards when bonds are exchanged for company shares.

Those pledges have been mocked by the Conservatives, with Prime Minister Boris Johnson calling plans to nationalise broadband a “crazed Communist scheme”.

Labour said it planned to raise overall public investment to around 4.5% of economic output – about 55 billion pounds a year – versus 3% targeted by the Conservatives.

Labour’s plan would put Britain around the top of developed economies ranked by the Organisation for Economic Co-operation and Development (OECD), alongside Norway and Sweden.