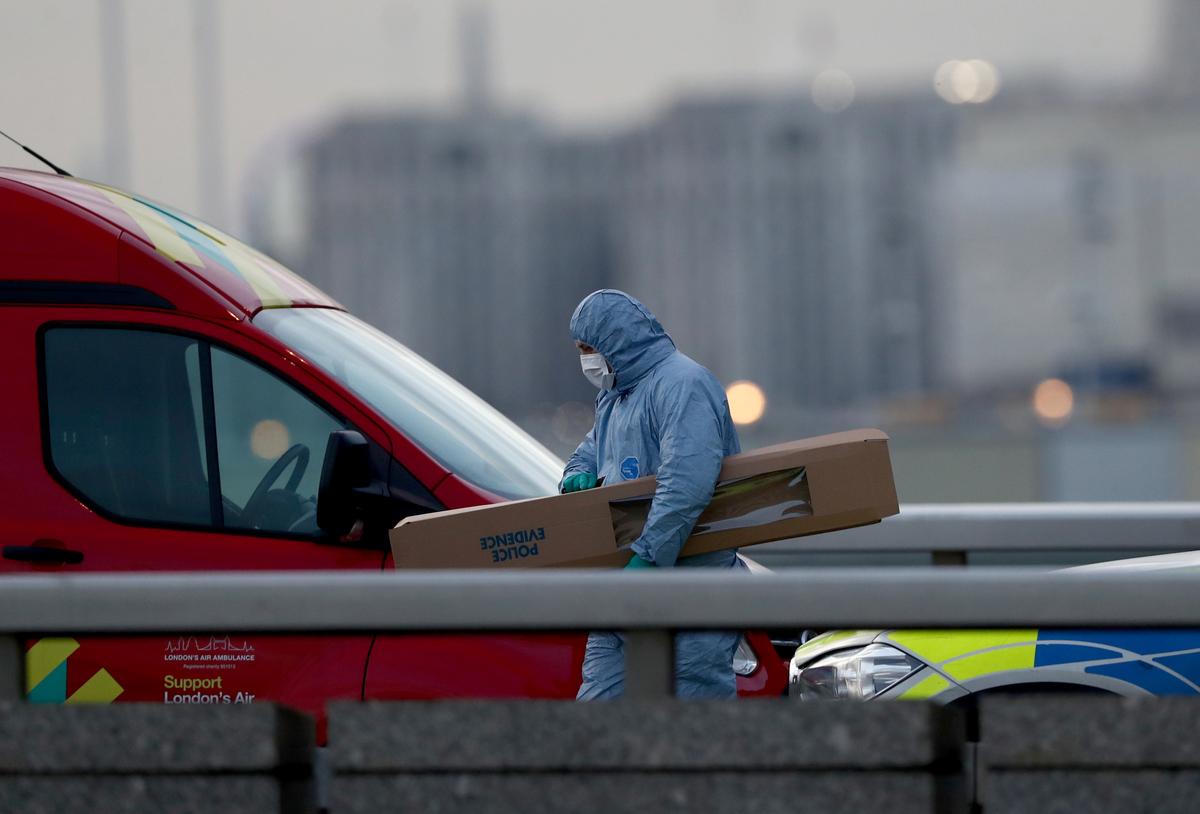 LONDON (Reuters) – The 28-year-old British man who killed two people in a stabbing spree on London Bridge before police shot him dead had been released from prison after a previous conviction for terrorism offences, prompting political recriminations ahead of an election.

Wearing a fake suicide vest and wielding knives, Usman Khan went on the rampage on Friday afternoon at a conference on criminal rehabilitation beside London Bridge. He was wrestled to the ground by bystanders and then shot dead by police.

Prime Minister Boris Johnson, who faces a snap election on Dec. 12, said it was a terrorist attack and vowed to end a practice whereby serious offenders can be automatically let out of prison early, as the opposition attacked the policy.

Khan, whose family is from Pakistan-controlled Kashmir, was convicted in 2012 for his part in an al-Qaeda-inspired plot to blow up the London Stock Exchange. He was released in December 2018 subject to conditions.

“This individual was known to authorities, having been convicted in 2012 for terrorism offences,” Britain’s top counter-terrorism police officer, Neil Basu, said in a statement. “Clearly, a key line of inquiry now is to establish how he came to carry out this attack.”

Two people – a man and a woman – were killed in the attack, which took place days before London is due to host NATO leaders including U.S. President Donald Trump. A man and two women were injured and remain in hospital, Basu said.

Police searched an address in Stafford, central England, as they continued their investigation.

The opposition Labour Party criticised the government’s record on crime.

“There are big questions that need to be answered,” London Mayor Sadiq Khan, the most senior opposition politician in Britain in a position of power, told Sky News.

“One of the important tools judges had when it came to dealing with dangerous, convicted criminals… was their ability to give an indeterminate sentence to protect the public,” he said. “(That) was taken away from them by this government.”

During the 2017 election campaign, London Bridge was the scene of an attack when three militants drove a van into pedestrians and then attacked people in the surrounding area, killing eight people and injuring at least 48.

A forensic officer carries an evidence box at the scene of a stabbing on London Bridge, in which two people were killed, in London, Britain, November 30, 2019. REUTERS/Simon Dawson

Islamic State said its fighters were responsible for that attack, but the British authorities have cast doubt on those claims. The 2017 attack focused attention on cuts to policing since the governing Conservatives took power in 2010.

Johnson said sentencing rules needed to be toughened up.

“I have long said that this system simply isn’t working,” he said after visiting the scene of the attack.

“It does not make sense for us, as a society, to be putting people convicted of terrorist offences, serious violent offences, out on early release.”

Friday’s attack, just 13 days before an election that could decide the fate of Britain’s exit from the European Union, prompted political leaders to scale back campaigning.

The campaign so far has focused on Brexit and the health service but is likely to include crime over the coming days as the Conservatives seek to minimise the fallout from the incident.

Queen Elizabeth sent her sympathies to those affected by the attack and praised those who intervened to thwart the assailant.

“I express my enduring thanks to the police and emergency services, as well as the brave individuals who put their own lives at risk to selflessly help and protect others,” she said.