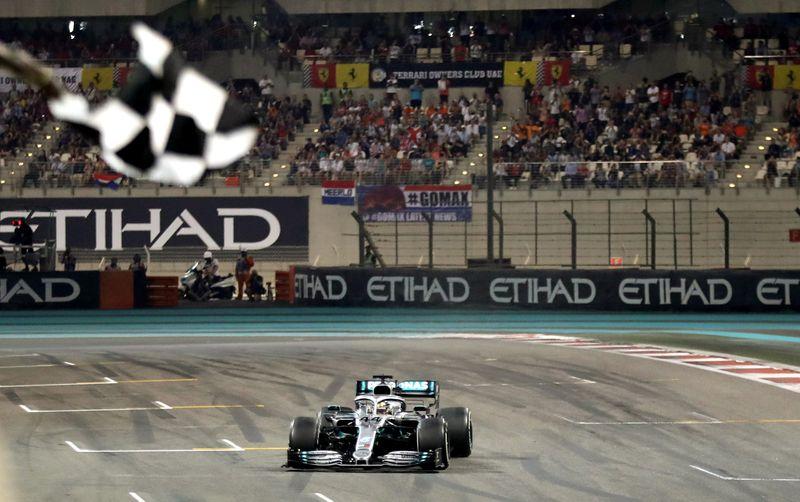 Hamilton’s 11th win of the season, fifth in Abu Dhabi and 84th of his career. He started his 250th race from pole position, led every lap and also set the fastest lap. It was his 50th win from pole and he ends the season with a record points tally of 413. Bottas started at the back of the grid after engine penalties.

Leclerc started under the threat of disqualification after the governing FIA found an irregularity in the amount of fuel in his car. The team were fined 50,000 euros ($55,110.00) after the race. Four times champion Vettel lost out in a double-stacked pitstop and dropped a place from where he started. The German ends the season fifth and behind his fourth-placed team mate.

Verstappen secured third place in the championship, which means he must now attend the FIA’s end-of-year prize-giving gala in Paris. He started on the front row, lost out to Leclerc on the opening lap but won the place back to finish 16.772 seconds behind Hamilton. Albon started fifth but lost out after making an early pitstop and getting caught in traffic.

Sainz grabbed the final point by passing Renault’s Nico Hulkenberg on the last lap to secure sixth place in the championship ahead of Toro Rosso’s Pierre Gasly. British rookie Norris, who out-qualified his Spanish team mate 11-10 over the season, was overtaken at the end by Racing Point’s Sergio Perez.

Hulkenberg bowed out, for next year at least, with a sentimental ‘Driver of the Day’ award but no points in his final race after losing out to Sainz and then Ricciardo on fresh tyres at the finish. Ricciardo had started seventh but was bogged down in traffic after an early pitstop.

Gasly, second in Brazil two weeks ago, had a frustrating afternoon with his race effectively over on the opening lap when he was hit from behind by Racing Point’s Lance Stroll and into Perez. He then had to pit for a new front wing and rejoined a lap down. Kvyat had a strong first stint.

Perez was hit from behind by Gasly into turn one at the start but battled back to pass Norris on the last lap and make sure he ended the championship inside the top 10. Stroll hit Gasly and had to pit for a new front wing. The Canadian later retired with a brake issue.

The former Sauber team could at least take some encouragement by ending the season with more points than in 2018. Giovinazzi and Williams’ Robert Kubica collided, with stewards investigating and deciding to take no further action.

Grosjean paid the price for a collision with Bottas in Friday practice, with the impact damaging his car’s new floor and forcing a switch back to an old specification.

Russell ends his rookie season as the only driver without a point but with a 21-0 qualifying record over the departing Kubica. The Briton and Pole made contact on lap one and Kubica then collided with Giovinazzi, damaging the car and making the last 35 laps difficult.