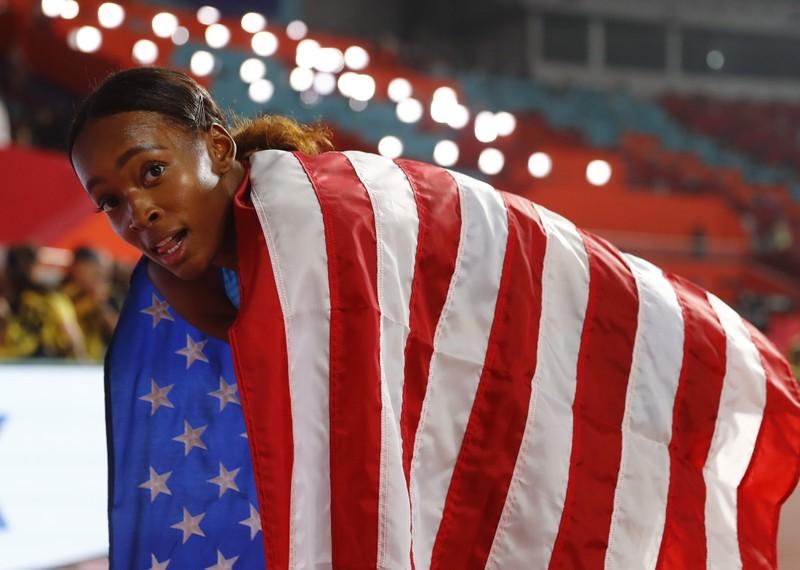 DOHA (Reuters) – American Dalilah Muhammad broke her own world record to win the women’s 400 metres hurdles at the world championships with a time of 52.16 seconds on Friday, edging out compatriot Sydney McLaughlin in a gripping race.

The 29-year-old Muhammad, the 2016 Olympic champion, crossed the finish line 0.04 seconds faster than her previous world record set in July.

The American attributed her two world marks to her work ethic, and said she was focused on successfully defending her title at next year’s Tokyo Olympics.

“It’s just how I work,” she told reporters after the race. “I go out there every day and just try to give it my all. It feels good to have it come when it matters.”

Muhammad was only slightly ahead of silver medallist McLaughlin over the first 100m of the race, but her lead grew as they came through the second bend.

When she crossed the finish line, Muhammad had no idea she had set a new record.

“I didn’t even know who had won the race,” she said.

McLaughlin, 20, closed in on her team mate on the home stretch but she could not quite catch up as she finished second in 52.23 seconds, a personal best.

“She is amazing,” McLaughlin said of Muhammad. “She has been doing this for a long time. I constantly try to learn from her. We knew it would be fast, but we didn’t think it would be another world record.”

The two Americans completely dominated the race, opening up a large gap on the rest of the field.

Rushell Clayton of Jamaica took the bronze with a personal best time of 53.74 seconds.