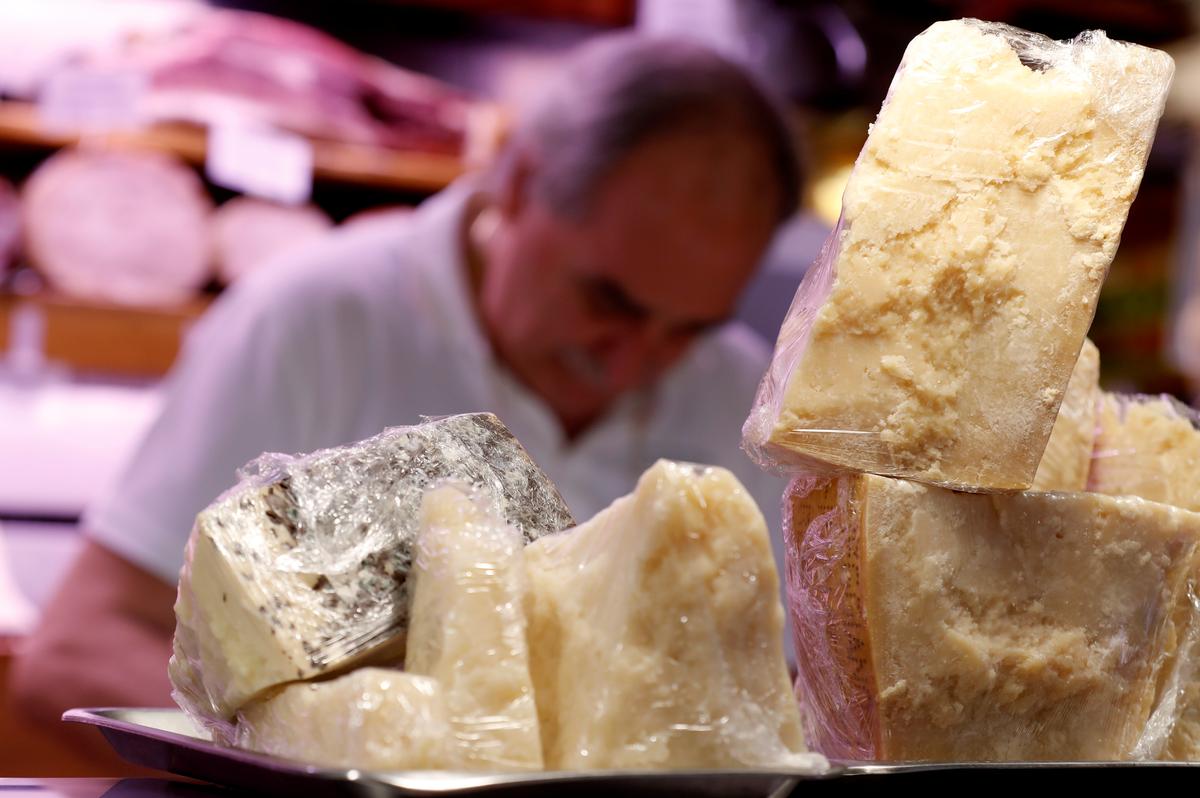 By Andrea Shalal and Aleksandra Michalska

Phil Marfuggi, president and chief executive officer of Ambriola, a unit of Auricchio SpA, one of Italy’s largest cheese producers, is among the many importers and shop owners across the country who are scrambling to stockpile European cheeses before new U.S. tariffs kick in on Oct. 18 in efforts to shield consumers from price hikes.

The Trump administration on Wednesday slapped 25% tariffs on cheese and other European Union products ranging from whisky to woolens, in retaliation for EU subsidies on large aircraft. Both sides say they are open to negotiations, but trade experts see little chance of averting the duties – at least in the short run.

Importers began ordering millions of dollars of extra wheels of Parmigiano Reggiano and other harder cheeses after the U.S. Trade Representative’s office in July added cheese to its list of EU products potentially facing tariffs due to the dispute over aircraft subsidies.

“When that list came out, that’s when I … started bringing in many more containers of cheese of Reggiano, Provolone,” said Marfuggi, who has another 21 shipping containers full of cheese en route to be added to the stockpile in the company’s warehouse in Caldwell, which sits about 15 miles west of Manhattan.

Marfuggi said he ordered an extra $15 million of cheeses that could be stored for over a year to ensure adequate supplies for existing customers and protect pricing through the end of the year.

“I’ve been building up inventory … because we have a target on our backs,” he said.

The new duties could slash U.S. imports of EU cheeses valued at $1.5 billion a year by 30% and jack up prices across the country, said Marfuggi, who also serves as president of the Cheese Importers Association of America.

Some higher-priced items will simply disappear from stores, he predicted, like Moliterno al Tartufo, an aged Italian cheese with an intense truffle flavor. Even Parmigiano Reggiano could be at risk if prices rose to $30 a pound, he said.

“There are going to be some items … that the supermarkets are just not going to handle anymore. It’ll be price prohibitive for that,” he said.

The tariffs will hit consumer prices and eventually jobs across the United States, said Ralph Hoffman, executive vice president of Schuman Cheese, one of the largest importers of hard Italian cheeses.

Over 20,000 U.S. retail stores ranging from Costco Wholesale Corp (COST.O) to Wegmans Food Markets sell EU cheeses. These cheeses generate some $3.5 billion of revenue for U.S. companies, supporting some 20,000 jobs, including buyers, deli clerks, truck drivers and warehouse workers, Hoffman said. He noted that the new tariffs come on top of existing duties of around 15%.

Specialty grocer The Fresh Market expects the tariffs to affect about 35% of the 200 cheeses it carries at its 160 stores.

“We’re waiting to see how the importers are going to pass the cost along,” said Andrew Harvell, who heads the company’s cheese department. “Everything’s still up in the air,” he said, adding that Fresh Market had pre-ordered enough cheese to last through the holiday season, but may need to raise prices soon thereafter.

Mike Bowers, the third-generation owner of a specialty cheese shop at Washington’s storied Eastern Market, said he began hoarding extra wheels of hard cheeses – some weighing as much as 80 pounds – in July when USTR first announced it could impose tariffs on cheese and other agricultural goods.

His glass cheese counters, coolers and large walk-in refrigerator are filled to overflowing, but Bowers said his supplies will not last through the holiday season. He said he will have to pass on the cost of the tariffs.

“I have a stockpile of cheese to make sure that I’m able to maintain inventory and maintain sales at my counter,” Bowers said. “And then as time goes on, we’ll have to see.”

He said the quality of U.S. cheeses was improving, providing good alternatives for some popular European cheeses, but he would have to find ways to be more “innovative” in the future.

He also has a solid selection on hand of Swiss cheeses that are not subject to EU tariffs, including a Gruyere-style L’Etivaz, made in copper pots according to ancient tradition.

Marfuggi said it was a relief that USTR opted for 25% tariffs instead of the 100% rate initially proposed, but he worries that buyers would switch to domestic or other foreign supplies if the tariffs stayed in place a long time.

“If that happens, you’re going to lose a considerable amount of consumer base, and it’s hard to win that back,” he said.

And cheese hoarding cannot solve all the expected shortages, he warned. Many softer cheeses cannot be stored for nearly as long, so prices of those items will likely rise quickly.

“If you’re a Gorgonzola lover, you’re definitely out of luck,” Marfuggi said.