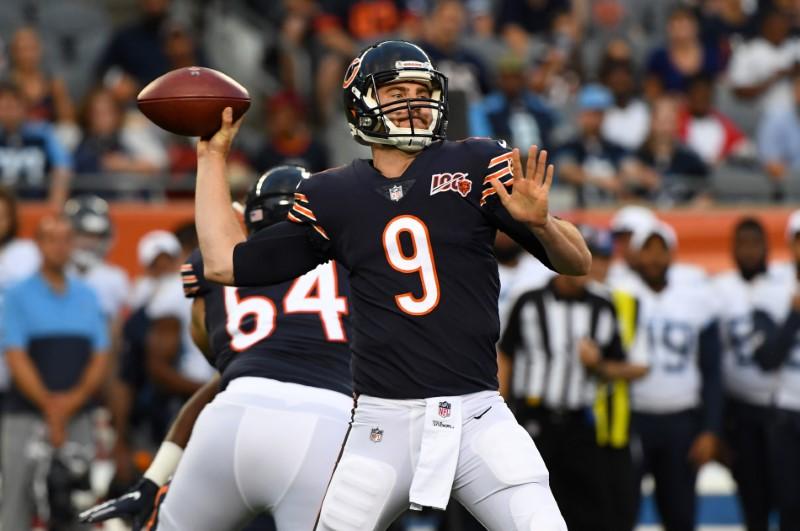 The Chicago Bears promoted Tyler Bray from the practice squad on Saturday and he will serve as the backup quarterback to Chase Daniel for Sunday’s game against the Oakland Raiders in London.

Daniel is starting against Oakland after Mitchell Trubisky injured his left shoulder in Week 4 against the Minnesota Vikings.

Bray, 27, is in second season in the Chicago organization and has spent most of that time on the practice squad.

He has appeared in one NFL game and thrown one pass — an incompletion in 2017 for the Chiefs — since entering the league in 2013 with Kansas City. Bray spent five seasons with the Chiefs and worked with second-year Bears coach Matt Nagy in all five of those campaigns.

—Buffalo quarterback Josh Allen cleared the NFL concussion protocol and is expected to play Sunday vs. the Tennessee Titans.

Allen was injured in the third quarter of last Sunday’s loss to the New England Patriots when he absorbed a helmet-to-helmet hit.

Allen has passed for 903 yards, three touchdowns and six interceptions this season. He also has rushed for three scores.

The Packers needed help in the backfield for Sunday’s game against the Dallas Cowboys due to the absence of Jamaal Williams (concussion).

Carson, 26, was undrafted out of Texas A&M in 2016 and split the 2018 season with the Cincinnati Bengals (two games) and Packers (four games).

Mills, 28, had started the last two games before sustaining the injury during Sunday’s 27-10 loss to the Seattle Seahawks.

Mills signed a one-year deal with the Cardinals on Sept. 10 after he was cut by the Miami Dolphins.

—Running back Rex Burkhead is among three players who won’t play for the New England Patriots at the Washington Redskins on Sunday.

The Patriots announced that Burkhead (foot), safety Patrick Chung (heel) and special teams player/safety Nate Ebner (groin) will not dress for the game.

In Burkhead’s absence, Sony Michel and James White are expected to carry the bulk of the load, but rookie Damien Harris could see his first action of the season. The Patriots chose the Alabama product in the third round of the 2019 draft.

—The Atlanta Falcons placed veteran punter Matt Bosher on injured reserve due to a groin injury.

Bosher, 31, will miss at least the next eight weeks. He was averaging 41.9 yards on nine attempts this season.

Matt Wile was signed to handle the punting for Sunday’s game against the Houston Texans.

According to multiple reports, a Los Angeles County judge ruled Friday that three felony charges against Martin, 29, will be dropped in two years so long as Martin attends agreed-to alcohol counseling and psychotherapy sessions.

In February 2018, Martin posted to Instagram a picture of a shotgun and shells on a bed, with the caption “When you’re a bully victim & a coward, your options are suicide, or revenge” and four accounts tagged. Those accounts belonged to former Miami Dolphins teammates Richie Incognito and Mike Pouncey, as well as a pair of former high school classmates.