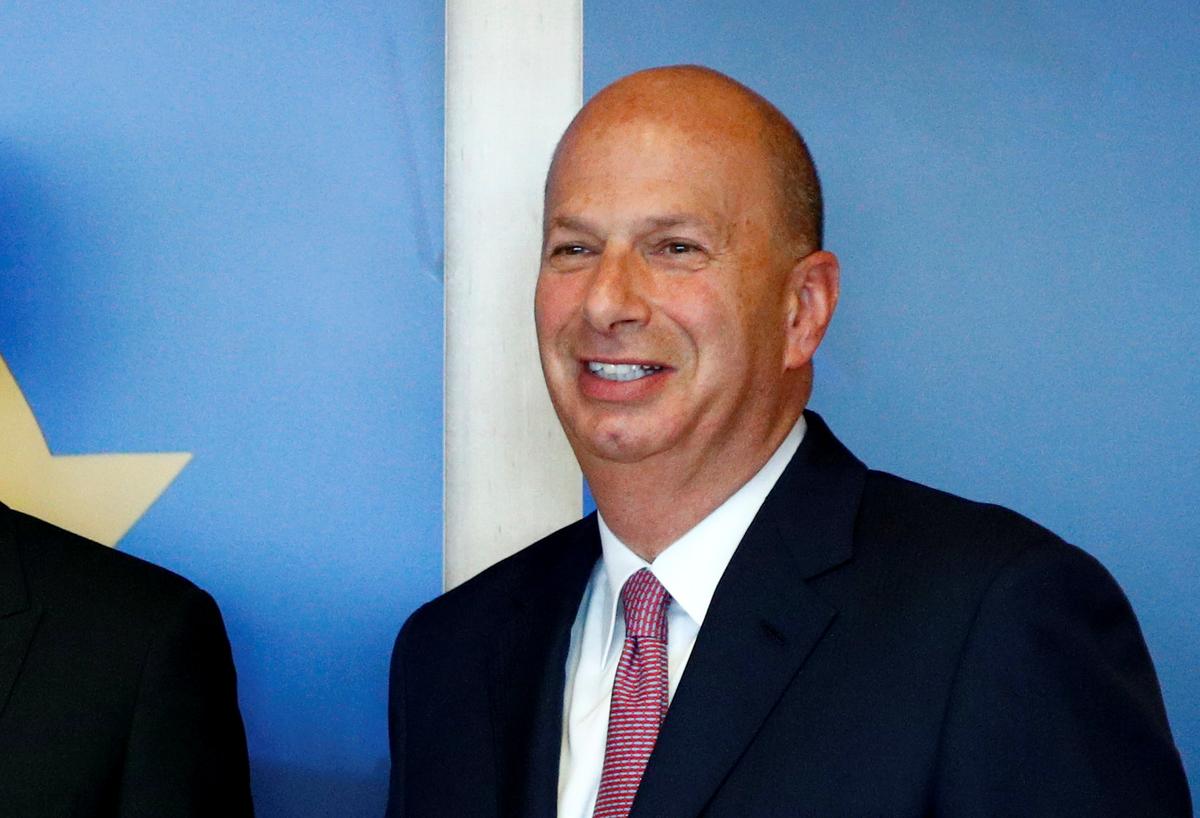 WASHINGTON (Reuters) – The Trump administration on Tuesday blocked an ambassador from testifying to the U.S. House of Representatives’ impeachment investigation of President Donald Trump’s dealings with Ukraine, a move top House Democrats vowed to counter with a subpoena.

The chairmen of three House committees leading the impeachment investigation said they would compel testimony from U.S. Ambassador to the European Union Gordon Sondland, a Trump political donor who started his diplomatic job in July. The investigators are examining Trump’s efforts to get Ukraine to probe former Vice President Joe Biden, who leads the field of potential challengers to the Republican president.

The State Department directed Sondland early on Tuesday not to appear for his scheduled interview by the House committees leading the impeachment inquiry, his lawyer said in a statement.

“He stands ready to testify on short notice, whenever he is permitted to appear,” the lawyer, Robert Luskin, said.

State Department officials could not be immediately reached to comment on what issues had blocked his testimony.

The impeachment probe is focusing on a whistleblower’s allegations that Trump used nearly $400 million in U.S. military aid to secure a promise from Ukraine’s president to investigate Biden, a leading candidate for the 2020 Democratic presidential nomination.

“The president is obstructing Congress from getting the facts. That is an abuse of power to act in this way,” Democratic House Speaker Nancy Pelosi told reporters in Seattle.

Sondland was a key witness for the House Foreign Affairs, Intelligence and Oversight Committees, whose staff had been expected to ask him why he became involved in dealings with Ukraine, which is not a member of the EU.

Trump has denied he did anything wrong in a July 25 phone call with Ukrainian President Volodymyr Zelenskiy in which Trump pushed for an investigation of Biden and his son.

“I would love to send Ambassador Sondland, a really good man and great American, to testify, but unfortunately he would be testifying before a totally compromised kangaroo court, where Republicans’ rights have been taken away, and true facts are not allowed out for the public …. to see,” Trump wrote on Twitter.

According to text messages released by House committee leaders last week, Sondland was heavily involved in contacts with Zelenskiy as he sought a meeting with Trump, and Ukrainian officials expressed concern at the administration’s decision to block U.S. military assistance for Kiev.

In one of the texts, for example, Sondland, formerly a Seattle-based hotelier who donated $1 million to Trump’s inauguration committee, emphasized that Trump “really wants the deliverable.”

Concerns about the July 25 call came to the attention of Congress in a report by a whistleblower within the U.S. intelligence community. On Sunday, lawyers said a second whistleblower had come forward to substantiate that complaint.

The Sondland interview would have followed those of officials including the former U.S. special envoy for Ukraine, Kurt Volker, and Michael Atkinson, the inspector general of the U.S. intelligence community.

According to a person familiar with the matter, Sondland placed a call to Trump after a top American diplomat in Ukraine expressed concern that Washington was linking U.S. aid to a request for an investigation that would help Trump’s political campaign.

Sondland responded to the diplomat’s text five hours later: “The President has been crystal clear no quid pro quo’s of any kind. I suggest we stop the back and forth by text.”

A career diplomat, Marie Yovanovitch, is scheduled to meet with the committees behind closed doors on Friday. Yovanovitch was the U.S. ambassador to Ukraine until Trump recalled her in May before her term was up, after the president’s supporters questioned her loyalty.

Congressional staff and lawyers for the first whistleblower are close to making final arrangements for the witness to speak to congressional investigators away from Capitol Hill as early as this week, a source close to the parties said on Tuesday.

The whistleblower’s lawyers are in discussions with intelligence panels in the Democratic-led House and Republican-led Senate, a congressional official said. All the talks include efforts to keep the whistleblower’s identity concealed from committee members and the public.

Trump has called for the whistleblower to be publicly identified.

The impeachment inquiry has heightened bitter partisan divisions in Congress. Trump’s fellow Republicans control the Senate where a trial on whether to oust the president would be held if the House ultimately votes to impeach him.