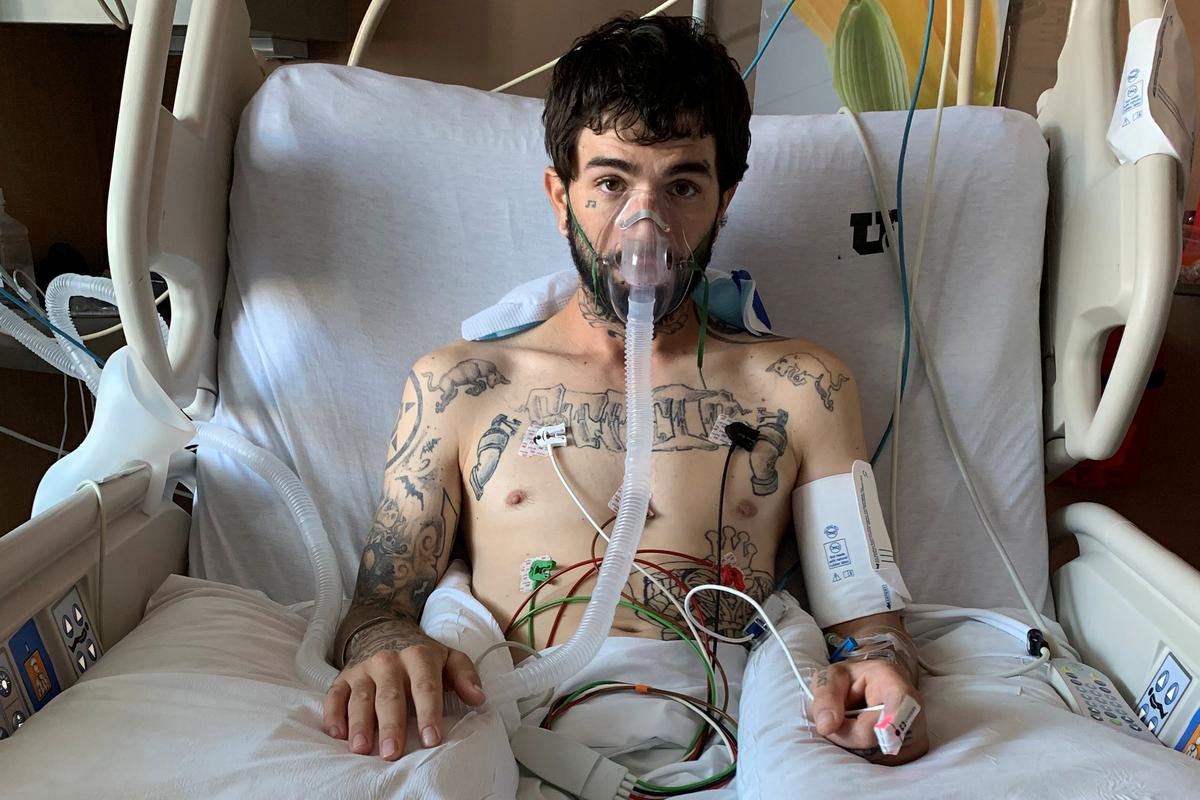 CHICAGO (Reuters) – U.S. health officials are preparing to release new guidance for doctors stressing the need to ask every patient with an apparent respiratory infection about their vaping history.

Jeffrey Manzanares, 33, lies in the intensive care unit of the University of Utah Hospital while being treated for vaping injury and other lung infections in Salt Lake City, Utah, U.S. in September 2019 and provided October 10, 2019. Courtesy of Marisela Trujillo via REUTERS

The updated guidance will also advise physicians on how to diagnose and manage patients who may have both a lung infection and a vaping injury.

Dr. Ram Koppaka, a medical officer with the Centers for Disease Control and Prevention (CDC), said doctors need to be aware that there is an overlap between the early symptoms of vaping injury and common respiratory infections.

The CDC has already recommended doctors start asking patients about their vaping history during routine visits, but gathering that information is especially important as doctors evaluate patients with respiratory symptoms from infectious causes.

“Both diagnoses must be evaluated,” Koppaka said in a phone interview.

The CDC reported on Thursday that as of Oct. 8, 1,299 people in the United States have had confirmed or probable cases of lung injuries linked to vaping, and 26 have died.

Some U.S. doctors have raised concerns that vaping injury cases will be missed in the crush of patients seeking treatment for seasonal flu and other respiratory ailments.

The early symptoms of vaping injury include shortness of breath, cough, chest pain, fever, and in some cases, gastrointestinal symptoms such as nausea, vomiting and diarrhea. “All of those can also be seen with influenza,” Koppaka said.

In the United States, flu activity starts to pick up in October and November and typically peaks between December and February.

“The fact that a given individual that presents for clinical evaluation could have flu, could have lung injury due to e-cigarettes, or both, makes it complicated for providers,” Koppaka said.

As many as 72% of the earliest vaping patients in Illinois and Wisconsin sought medical treatment in outpatient clinics and emergency rooms before doctors admitted them to a hospital with severe lung injuries from vaping, state officials reported last month in the New England Journal of Medicine.

Most of those patients initially were given antibiotics. When those failed, many responded to treatment with supplemental oxygen and steroids.

‘ENDED UP IN AGONY’

In addition to flu, many respiratory infections, including fungal infections, can cause symptoms that could confound doctors and delay a vaping diagnosis.

The University of Utah Hospital in Salt Lake City has treated 22 patients with vaping injuries, including Jeffrey Manzanares, 33, who was also infected with a cold and human metapneumovirus that led to pneumonia.

Manzanares first sought treatment at a local hospital on Sept. 3, where he was given an antibiotic and oxygen for his pneumonia and sent home, his vaping injury undetected, he said in a phone interview.

“I ended up in agony from the lack of oxygen. It felt like someone was stabbing a knife into my whole body,” he said.

He went to the University of Utah Hospital the next day, where he spent 21 days, including 17 in intensive care. During his illness, Manzanares said he lost 50 pounds (22.7 kg), a third of his normal body weight.

“He was wildly sick,” said Dr. Scott Aberegg, a pulmonologist who treated Manzanares. “If that is any harbinger of what is to come in viral pneumonia season, this could be very problematic.”

Aberegg participated in a conference call earlier this month with other doctors advising the CDC on how clinicians should diagnose and manage vaping patients.

He said many doctors who get back a positive flu test may just assume the patient has the flu and not realize they are also a vaper.

State health officials are on alert.

“We want to make sure to investigate all cases that are reported and make sure we don’t miss anything that may be thought of as flu or may be associated with vaping or vice versa,” Dr. Pam Pontones, Indiana’s deputy health commissioner and state epidemiologist, said in a phone interview.

Influenza can be deadly in people who have other underlying illnesses.

“It’s really important that anyone, but especially people who have underlying pulmonary infections of any kind, be vaccinated for influenza,” Pontones said.

The CDC recommends everyone over the age of six get a flu shot.