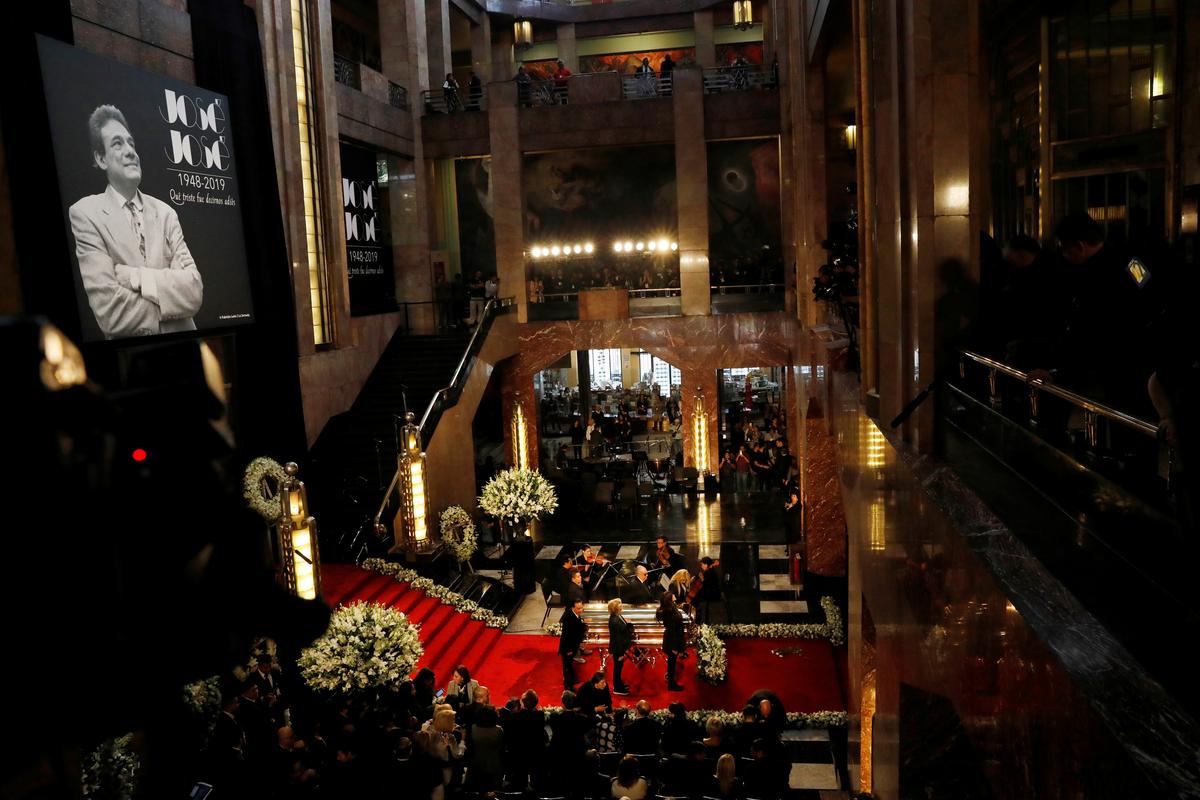 Family and friends stand next to the coffin of late Mexican singing legend Jose Jose during his tribute at Bellas Artes Palace in Mexico City, Mexico October 9, 2019. REUTERS/Carlos Jasso

Born Jose Romula Sosa Ortiz, the singer known for romantic ballads that captivated Latin America for more than half a century died last month in Miami at age 71.

Fans in Mexico, where the singer started on the road to stardom as a child, poured into the streets of the capital to see the hearse carrying Jose Jose’s casket, escorted by a dozen motorcycles and trailed by cars with family members.

Some fans arrived before dawn to claim a spot in line to watch the memorial at the Palace of Fine Arts. Others followed the hearse as it made its way from the airport, singing his songs and taking photos of the motorcade.

“He’s an exceptional singer. He sings stories through his music,” said Gilberto Martinez, watching the ceremony on a giant video screen outside the palace.

“If you don’t know him, you haven’t understood what love is, what falling out of love is, what Jose Jose wanted to show us with each one of his songs – above all with his voice,” he said.

Jose Jose received several Grammy nominations, sold more than 250 million albums and was once courted by music legend Frank Sinatra, who wanted to sign him to his music label.

A symphony orchestra, mariachi band and other artists honored Jose Jose’s legacy by performing some of his hits, including “The Sad One” and “The Ship of Oblivion.”

Fans filed past the casket with two red roses and a gold-hued microphone placed on top, taking photos and throwing flowers on the crimson carpet.

“I feel it in my soul, a wound that will never (heal), it will always be there. He will leave, but he’ll live on in our hearts,” said Elsa Arias.

Broadcaster Televisa reported the singer died after complications following treatment for pancreatic cancer. Jose Jose announced two years ago that he had a tumor in his pancreas that was being treated with chemotherapy.

After the ceremony, the family led a funeral procession through the singer’s former neighborhood before attending mass at the Basilica of Guadalupe.

He was buried at the French Pantheon cemetery, where some former presidents were also laid to rest.