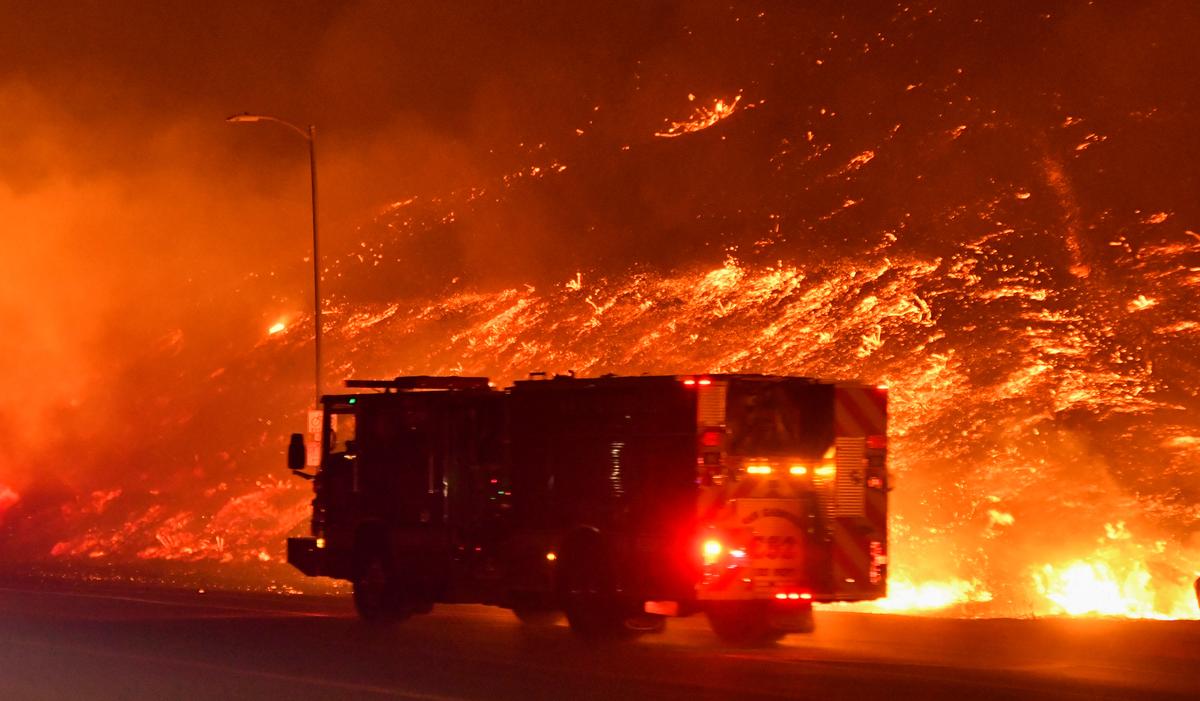 LOS ANGELES (Reuters) – A fierce, wind-driven wildfire swept through foothills and canyons along the northern edge of Los Angeles on Friday, engulfing homes, closing roads and engulfing acre upon acre of dry brush and chaparral as 100,000 residents were forced to flee.

At least one death was attributed to the fire, a man who authorities said suffered a heart attack while trying to battle encroaching flames.

The blaze, dubbed the Saddleridge fire, had charred more than 4,700 acres by Friday morning, 12 hours after it ignited and then grew quickly into the largest and most ferocious among a spate of wildfires across Southern California.

As water-dropping helicopters and airplane tankers carrying fire retardant fought the flames from the air, ground crews battled the blaze at close range with hand tools and bulldozers, while firefighters lugging hoses from house to house scrambled to protect threatened neighborhoods.

The conflagration was stoked by strong, dry Santa Ana winds blowing into the Los Angeles area from desert areas separated from the city by mountains to the east. The winds were moving the flames at a rate of 800 acres per hour, Los Angeles Fire Department officials said at a morning news conference.

“This is a very dynamic fire,” Fire Chief Ralph Terrazas told reporters, as he urged residents in harm’s way to heed evacuation orders. “Do not wait to leave.”

Los Angeles County Fire Captain Tony Imbrenda told local radio station KPCC that high winds also were making it more difficult to effectively fight the flames from the air, causing dissipation of water and fire-retardant drops before they could hit the ground.

Similarly strong winds in northern and central California prompted utility giant Pacific Gas & Electric to impose a precautionary shutoff of power to hundreds of thousands of homes and businesses to reduce the risk of wildfires. Governor Gavin Newsom said on Thursday the unprecedented measure was the fault of years of mismanagement by the utility.

At daybreak, the Saddleridge fire was still completely uncontained and its cause was under investigation.

Some 23,000 homes and around 100,000 residents were under mandatory evacuation orders that were expected to remain in effect for at least a few days, fire officials said. A number of emergency shelters quickly filled to capacity.

The Federal Emergency Management Agency (FEMA) said Friday it had authorized the use of federal funds to assist California in fighting the Saddleridge fire.

Authorities also fought overnight to contain the Sandalwood Fire in Riverside County, which had scorched about 820 acres near Calimesa, about 70 miles east of downtown Los Angeles by Friday morning. It was only 10% contained, Riverside County Fire Department (RCFD) officials said.

The Sandalwood fire erupted on Thursday afternoon when a garbage truck dumped burning trash that spread onto vegetation, the RCFD and California Department of Forestry and Fire Protection (Cal Fire) said in a statement.

The Saddleridge and Sandalwood fires were among the latest of roughly 275 wildfires that have broken out so far this year in California. They follow one of the deadliest and most destructive wildfire seasons on record in the state, one that claimed about 100 lives in 2018 and caused billions of dollars in property damage.

Much of Northern California, from San Francisco to the Oregon border, remained under a statewide “red flag” fire alert for heightened fire danger on Friday.

Firefighters have been able to quickly contain most of the other blazes around the state.

By late Thursday, PG&E announced it had restored power to more than half of its customers whose power was turned off, and that 312,000 remained without electricity.

More than 250,000 California households and businesses were without power on Friday morning, PowerOutage.US reported, nearly all of them PG&E customers in northern California.

PG&E filed for bankruptcy in January 2019, citing potential civil liabilities in excess of $30 billion from major wildfires linked to its transmission wires and other equipment.

As winds moved south Friday, a power cutoff similar to PG&E’s was underway at Southern California Edison, which warned more than 173,000 customers they could face outages.