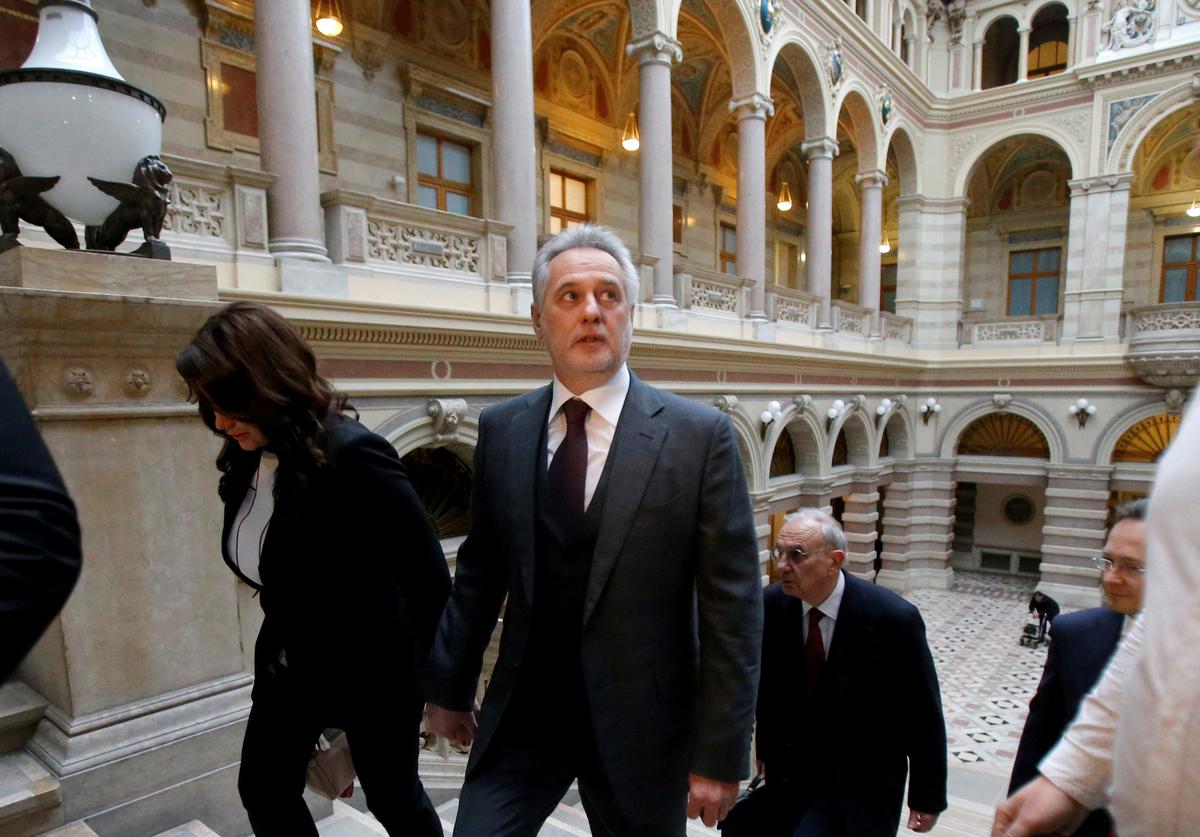 WASHINGTON (Reuters) – One of the two Florida businessmen who helped U.S. President Donald Trump’s personal attorney investigate his political rival, Democrat Joe Biden, also has been working for the legal team of a Ukrainian oligarch who faces bribery charges in the United States, according to attorneys for the businessmen and the oligarch.

Lev Parnas, one of the two associates of Trump lawyer Rudy Giuliani, served as a translator for lawyers representing oligarch Dmytro Firtash. Parnas was arrested on Thursday along with the other Florida businessman, Igor Fruman, on unrelated charges that included illegally funneling $325,000 to a political action committee supporting pro-Trump candidates.

Both men had worked in an unspecified capacity for Firtash before Parnas joined the Ukrainian’s legal team, according to a person familiar with the Florida men’s business dealings with Firtash.

The Floridians’ connection to indicted oligarch Firtash injects an intriguing new character into the rapidly unfolding drama surrounding the effort to impeach Trump.

Democrats in the U.S. House of Representatives launched the impeachment inquiry, the first step in unseating a U.S. president, over allegations that Trump pressured the Ukrainian president to help investigate Biden, a leading contender for the Democratic presidential nomination.

Giuliani was probing discredited allegations that Biden, when he was vice president, sought the firing of Ukraine’s chief prosecutor to halt the investigation of a gas company on which his son, Hunter Biden, was a board member. The Bidens have denied the claims, and the Trump camp has produced no evidence to support the assertions.

Firtash, one of Ukraine’s wealthiest businessmen, is battling extradition by U.S. authorities on bribery charges from Vienna, where he has lived for five years.

Federal prosecutors in Illinois said in court papers in 2017 that Firtash was an “upper-echelon” associate of Russian organized crime. He was indicted in 2013 and charged with bribing Indian officials for access to titanium mines. Firtash has denied any wrongdoing.

Firtash was “financing” the activities of Parnas and Fruman, the source familiar with their business dealings said. The source did not detail their specific work for the oligarch or how much money he had paid them and over what period.

U.S. lawmakers have sought to question the pair about their involvement in Giuliani’s investigation as part of the impeachment inquiry. Giuliani told Reuters in an interview that Parnas and Fruman – U.S. citizens who were born in Ukraine and Belarus, respectively – had helped “find people for me in Ukraine.”

“Mr. Parnas was retained by DiGenova & Toensing, LLP as an interpreter in order to communicate with their client Mr. Firtash, who does not speak English,” the Washington-based firm said in a statement.

A spokesman for the firm said Fruman was not retained in any capacity. DiGenova and Toensing did not comment further on Firtash’s business dealings with the two men in response to questions from Reuters.

John Dowd, the lawyer representing Parnas and Fruman, confirmed to Reuters that Parnas had worked for Firtash’s legal team as an interpreter. But Dowd also told the U.S. Congress that both men worked for DiGenova and Toensing.

On Oct. 3, Dowd wrote Congress to say the two men could not provide certain information about Ukraine because they were partially covered by attorney-client and other legal privileges. Dowd based the privilege claim on the fact that the two men assisted lawyers DiGenova and Toensing; that they had worked for Giuliani; and that Giuliani had previously represented them in their personal and business affairs.

Dowd’s letter did not mention Firtash. He declined to respond to a request to clarify whether one or both of his clients worked for Firtash’s legal team.

Parnas’s role as an interpreter for DiGenova and Toensing was reported on Thursday by the Wall Street Journal.

The person familiar with Parnas and Fruman’s business affairs told Reuters that both men had been working for Firtash for several months before Parnas joined the Ukrainian mogul’s legal team, and that Firtash has paid their expenses in the past. Their costs include private jet charters in the United States and foreign travel to Vienna, according to the source, who is familiar with their finances.

Giuliani told Reuters the two men had been to Vienna – where Firtash lives – three to six times in the last two months. Giuliani declined to comment on the reasons for their travels. He said he did not know about any business relationship between Firtash and the two men that helped him investigate Biden.

Firtash is a former supporter of Ukraine’s ousted pro-Russian president Viktor Yanukovich. He made a fortune selling Russian gas to the Kiev government. An Austrian court in June cleared the way for his extradition to the United States, but Firtash’s legal team continues to fight it.

In an interview with Reuters last month, well before his arrest, Parnas said Firtash had been framed by U.S. prosecutors and diplomats.

“They took an innocent man like Dmytro Firtash and they painted him out to be  this bad old Mafia  guy,  which he’s obviously not. He’s one of the most honest businessmen out there.  Incredible businessman.”

Parnas told Reuters that Firtash was the victim of a cabal that he alleges was involved in suppressing corruption by Joe Biden and his son in Ukraine. “Same people involved,” he said. “Same characters.”

Parnas declined to comment on the specific work he performed for Firtash, referring questions to the oligarch’s lawyers, Toensing and DiGenova.

Reporting by Aram Roston in Washington, Karen Freifeld in New York and Polina Ivanova in Kiev; Editing by Ross Colvin and Brian Thevenot