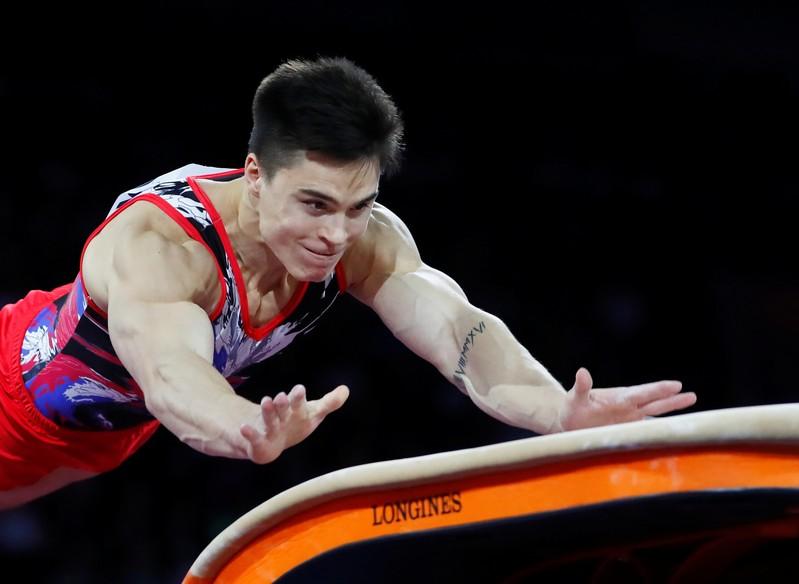 Nagornyy nailed his Dragulescu vault en route to earning an average of 14.966 points — beating Dalaloyan by a slim margin of 0.033, while Ukraine’s Igor Radivilov took the bronze medal.

The Russian men have enjoyed a memorable week in Stuttgart, winning their first-ever team gold on Wednesday, before Nagornyy collected the all-around title two days later.

“The most important medal for me was the team medal, then the all-around medal and then this one (in vault),” Nagornyy said.

“Really I didn’t expect this when I was coming here, I thought I could win a bronze, but then the other gymnasts made some mistakes and that allowed me to win the gold medal.”

Romanian Marian Dragulescu, who won four world titles on the vault in 2001, 2005, 2006 and 2009, missed out on a podium finish after struggling to maintain his balance in his second vault attempt.

The 38-year-old, who qualified for his fifth Olympic appearance this week, finished fourth with 14.624.

Fraser, the youngest competitor in the event at the age of 20, scored 15.000 to become the first British gymnast to win a world medal of any color on the apparatus.

“To be in the company of such great, great gymnasts that I’ve looked up to for my whole junior career and to be put up there with the likes of Max and Beth, I can’t comprehend how proud I am.”

Fraser’s victory took Britain’s medal tally for the championships to four after Whitlock regained his pommel horse world title and the Downie sisters – Becky and Ellie – picked up their first individual world medals on Saturday.

Reporting by Hardik Vyas in Bengaluru; editing by Clare Fallon and Pritha Sarkar