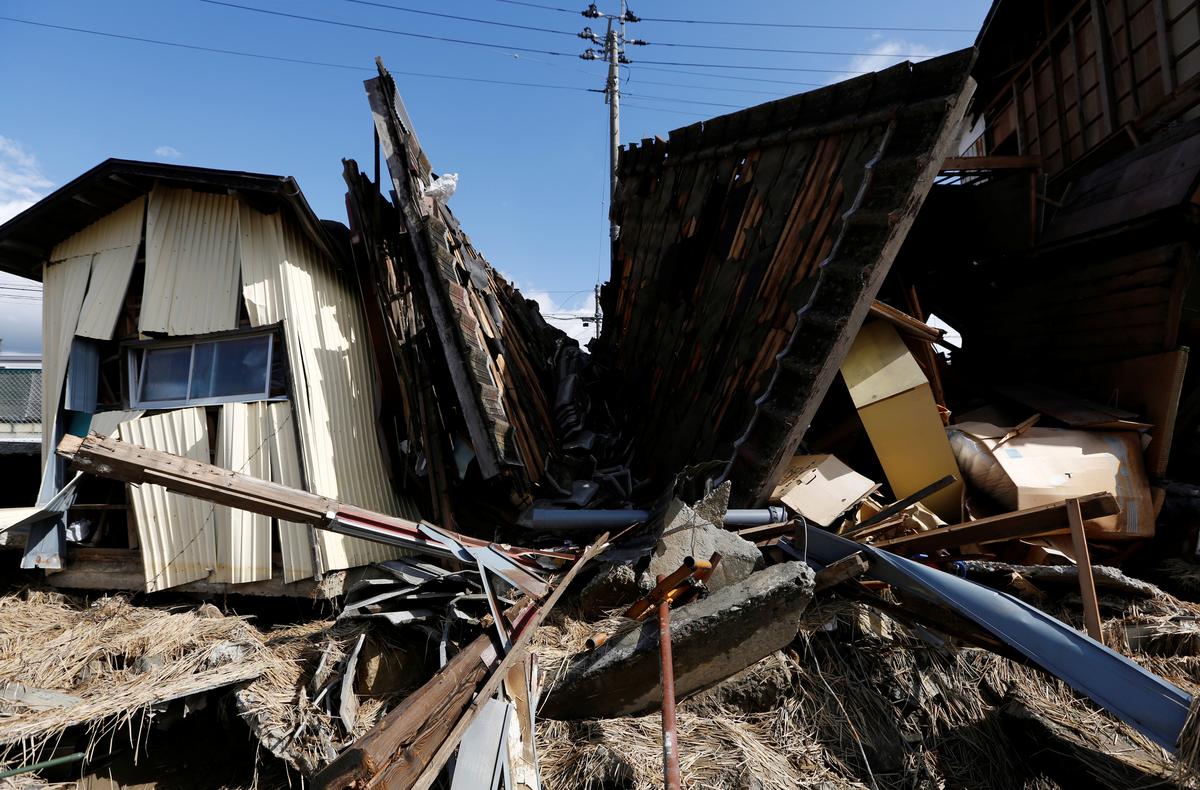 KORIYAMA, Japan (Reuters) – The death toll in the worst typhoon to hit Japan for decades climbed to 66 on Tuesday as rescuers slogged through mud and debris in an increasingly grim search for the missing, and as thousands of homes remained without power or water.

(Click tmsnrt.rs/31c0feP to see an interactive graphic plotting the path of Typhoon Hagibis)

The highest toll was in Fukushima prefecture north of Tokyo, where levees burst in at least 14 places along the Abukuma River, which meanders through a number of cities in the largely agricultural prefecture. At least 25 people died in Fukushima, including a mother and child who were caught in flood waters, NHK said. Another child of the woman remains missing.

Residents in Koriyama, one of Fukushima’s larger cities, said they were taken by surprise by the flooding. Police were searching house-to-house to make sure nobody had been left behind or was in need of help.

“The river has never flooded like this before, and some houses have been completely swept away. I think it might be time to redraw hazard maps or reconsider evacuation plans,” said Masaharu Ishizawa, a 26-year-old high school teacher who was cleaning up at his family home in Koriyama.

He said there are a lot of elderly in his area and many of them were taken in by relatives.

“We have never seen damage like this before, and maybe global warming and environmental change has something to do with it.”

Part of his family’s back garden had been washed away, breaking water pipes and electricity lines. The family was using water carried from a local community centre to clean up. Two doors down, an old house had collapsed after the flood washed its foundations away.

About 133,000 households were without water while 22,000 lacked electricity, well down on the hundreds of thousands initially left without power but a cause for concern in northern areas where temperatures are falling.

Survivors described how water rose rapidly to chest height in about an hour and mainly at night, making it hard to escape to higher ground. Many of the dead in Fukushima were elderly, NHK said.

“I checked the flood hazard map but it didn’t have my area as being at risk,” said Yoshinagi Higuchi, 68, who lives about 100 metres from one levee and waited out the flood on the second floor of his house as the ground floor filled with water.

“I heard there was a flood once before the war, but we just weren’t expecting the water to come over the levee despite all the warnings.”

Residents were warned by the public address systems that are a feature of Japanese cities and some evacuated to a local elementary school, he added as he and neighbours piled sodden tatami straw mats and other damaged furniture on the street.

“Nobody from city hall has come to check on us yet,” Higuchi said.

Fukushima is home to the Fukushima Daiichi nuclear power plant that was crippled by a 2011 earthquake and tsunami. Officials for Tokyo Electric Power Co (9501.T), which owns the plant, have said there was no leakage of contaminated water.

Prime Minister Shinzo Abe warned that the economic impact could be prolonged.

“The national government will continue to do everything possible so that the victims of this disaster can return to their normal lives as soon as possible,” Abe told a parliamentary committee.

Finance Minister Taro Aso said there was 500 billion yen ($4.6 billion) in reserves for disaster recovery and more money would be considered if needed.

Thousands of police, fire officials and military personnel continued to search for people who may have been cut off by floodwaters and landslides, with hope diminishing that the missing would be found alive.

Though the threat of rain is expected to diminish on Tuesday, temperatures are likely to drop in many areas later this week, in some cases to unseasonably low levels, NHK said.

Four of Japan’s major refiners said there was no impact on their refinery operations from the storm.