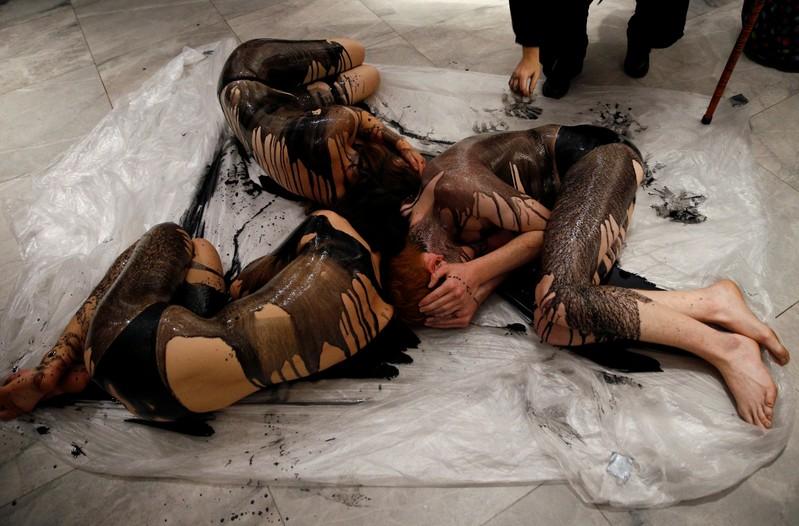 Extinction Rebellion members lie on the ground, covered in fake crude oil, to protest an exhibition sponsored by BP at The National Portrait Gallery in London, Britain October 20, 2019. REUTERS/Henry Nicholls

LONDON (Reuters) – Visitors to a London portrait gallery were treated to an impromptu performance on Sunday when three semi-naked climate activists were doused with mock crude oil in a protest against arts sponsorship by British oil company BP.

The unauthorized stunt at the National Portrait Gallery capped a two-week wave of actions by civil disobedience movement Extinction Rebellion, which led to more than 3,300 arrests in London and cities around the world, the group said.

Activists spread a white sheet over the floor of the main hall of the gallery’s Ondaatje wing before two women and a man wearing only skin-colored underwear adopted foetal positions on the covering.

“We cannot be artists on a dead planet…Yet right now the National Portrait Gallery is tied to a company brutally funding the end of our world,” Rickson said.

“With compassion, we ask you to change. Oil means the end, but art means the beginning.”

The National Portrait Gallery said BP’s support for its Portrait Award encouraged the work of artists around the world and enabled free admission to an exhibition, which had drawn more than 300,000 visitors this year.

“The ongoing debate around BP’s sponsorship of the arts raises important questions about both the environment and arts funding, and we are listening carefully to voices on all sides,” the gallery said in a statement.