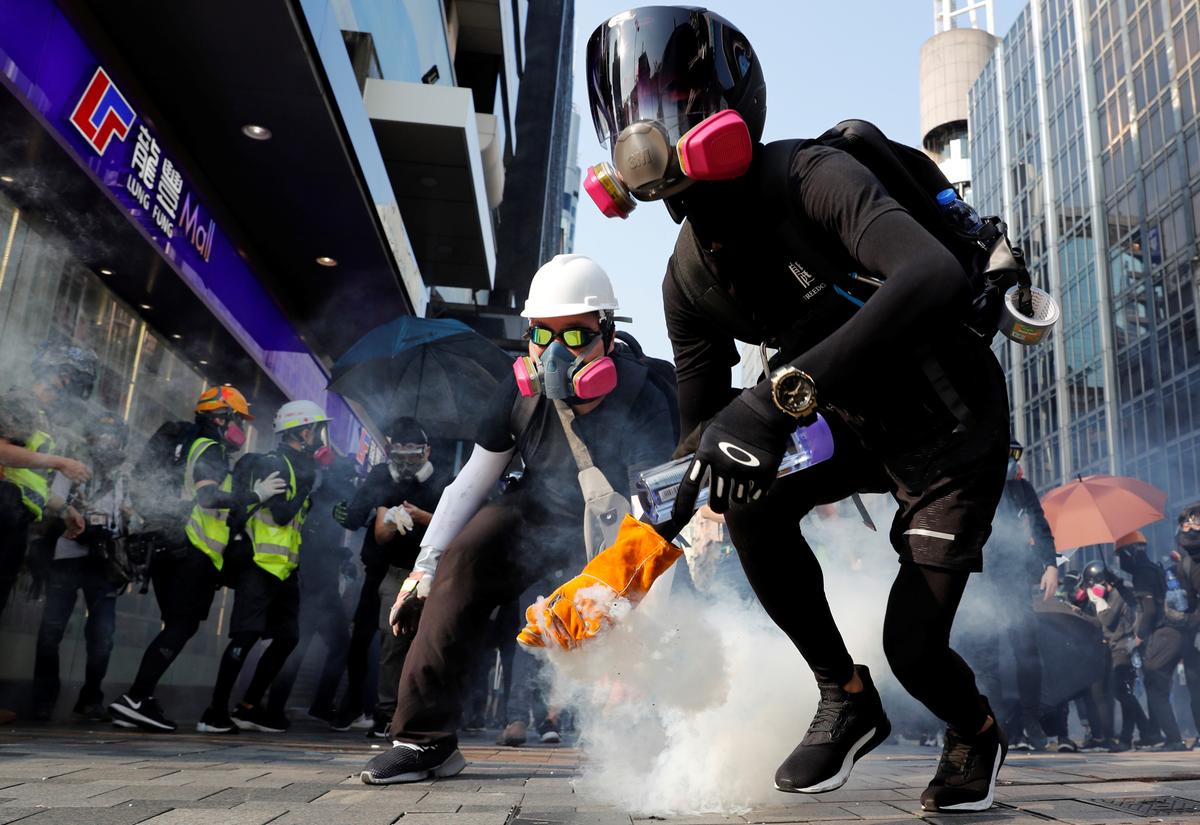 After two weeks of relative calm, the major rally showed that the pro-democracy campaign has not lost support and that hardcore protesters will continue to clash with police.

Protesters threw petrol bombs at the Tsim Sha Tsui police station on Kowloon peninsula after police inside fired volleys of tear gas to disperse demonstrators on the street.

Other black-clad protesters erected fiery barriers on Nathan Road, a major retail strip in the Kowloon district, as scores of riot police, shields in front, marched toward them, while others fired tear gas.

It was the heaviest use of water canons by police and many people hit with the water developed coughs, suggesting an irritant may be mixed with the water.

As riot police advanced protesters fell back to their next barricade, unlike past rallies when they stood and clashed with police, throwing petrol bombs and bricks.

Along the march route, protesters trashed metro stations and hundreds of shops, throwing goods onto the streets. Several Chinese banks were targeted.

By nightfall protesters had set fire to numerous road barriers and trashed shops in several Kowloon districts, said police, who continued to engage in street by street skirmishes. Police detonated what they said was an explosive device surrounded by broken bricks and left in the middle of a street.

Hong Kong has been battered by months of often massive and violent protests over concerns that Beijing is tightening its grip on the city, the worst political crisis since Britain handed the city back to China in 1997.

The protests in the city also pose the biggest popular challenge to China’s President Xi Jinping since he took power. Beijing has denied eroding Hong Kong’s freedoms and Xi has vowed to crush any attempt to split China.

The unrest was sparked by a bill that would have allowed extradition to mainland China for trial in Communist Party-controlled courts. It has since widened into a pro-democracy movement.

Protesters have targeted Chinese banks and shops with links to mainland China, leaving mainland Chinese living in Hong Kong worried about their safety.

Police had declared Sunday’s march illegal due to concerns over public safety. Protesters, ranging from young students to the elderly, many carrying umbrellas to shield their faces from street surveillance cameras, face arrest.

For the first few hours, the march was peaceful.

At the start of the march banners reading “Free Hong Kong” stretched across the ground. Other posters read “HongKongers Resist”, while graffiti on one wall said “Better Dead than Red”.

Hardcore protesters, who have staged months of running battles with police, set up road blocks and sprayed graffiti saying: “We chose to die on our feet rather than live on our knees!”. Some tore up pavement bricks for clashes with police.

Protesters believe the police refusal to issue a permit for Sunday’s march was an attempt to limit their numbers, as some would fear being arrested.

“The government pretends we just want to destroy the city. We’ll be out for as long as it takes to let the world know it is them who are destroying it,” said Ray, 24, who planned to go home after a few hours as he feared arrest. Like most protesters, he did not want to give his full name.

Hong Kong is governed under a “one country, two systems” formula, which permits the city freedoms not available on the mainland such as an independent judiciary.

Protesters are angry at Hong Kong’s leader Carrie Lam for what they see as her failure to protect those freedoms from an encroaching Beijing, imposing colonial-era emergency powers, and allowing what they say is excessive force by police.

“Carrie Lam is not listening to us at all. This may work in China but not in Hong Kong,” said Cheung, a 33-year-old woman wearing a face mask and black T-shirt, symbols of the democracy movement.

Protesters have five core demands: universal suffrage, an independent inquiry into police action against protesters, amnesty for those charged, an end to describing protesters as rioters, and the formal withdrawal of the extradition bill.

Lam has said the bill is dead, but it is yet to be formally withdrawn. She has rejected the other demands. On Sunday she said a police complaints inquiry will be completed before the end of the year.

Two people have been shot and wounded by police and thousands injured since the protests escalated in June. Police have arrested more than 2,300 people.

The Asian financial hub is facing its first recession in a decade because of the unrest.