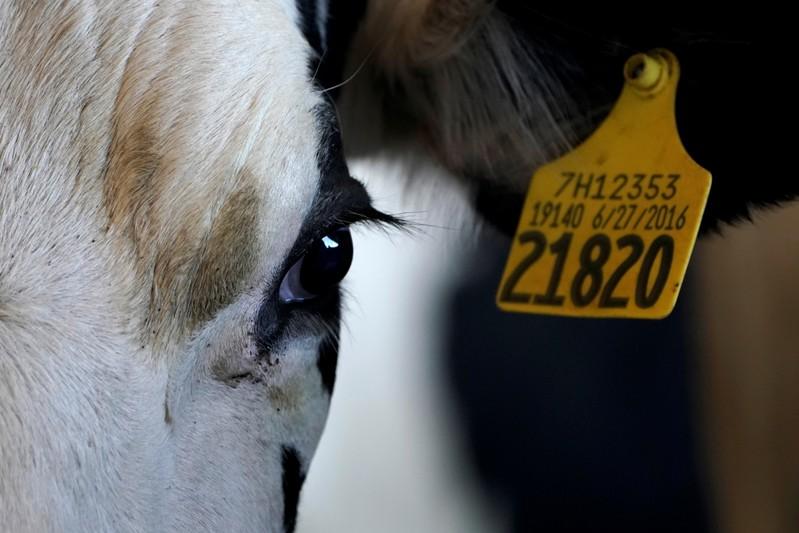 PIXLEY, Calif. (Reuters) – Joey Airoso has always been proud of his cows, whose milk goes into the butter sold by national dairy company Land O’Lakes. Now he has something new to brag about: the vast amounts of gas produced by his 2,900-head herd is powering truck fleets, homes and factories across the state of California.

A Holstein cow looks out as it travels along an automated milking machine at Airoso Circle A Dairy farm in Pixley, California, U.S., October 2, 2019. Picture taken October 2, 2019. REUTERS/Mike Blake

“It’s pretty incredible if you think about it,” Airoso said during a recent tour of his 1,500-acre farm, as a stream of watered-down manure flowed from cow sheds into a nearby pit. There the slurry releases methane that is captured and eventually piped into fueling stations and buildings.

Airoso is tapping into a growing market among U.S. utilities for so-called renewable natural gas, or biomethane, that is being driven by the fight against climate change.

For farmers, it is a way to get ahead of a wave of greenhouse gas regulation and make a bit of cash at the same time. And for utilities that buy or transport the gas, it is a way to respond to the increasing demands of customers and lawmakers to cut their reliance on fossil fuels.

“It is not something very many people are aware of yet, but it makes sense once it’s explained,” said Emily O’Connell, director of energy markets policy at the American Gas Association, the trade group for gas utilities.

Renewable natural gas can come from manure, landfills or wastewater and is interchangeable with gas drilled out of the ground. It cuts greenhouse gas emissions by ensuring significant volumes of methane that would have been produced anyway never reach the atmosphere. Methane is a far more potent greenhouse gas than carbon dioxide when it escapes into the air unburned.

Nationwide, more than a dozen utilities have started developing renewable natural gas production through partnerships with farmers, wastewater treatment plants and landfill operators, while nine have proposed price premiums for customers who choose it as a fuel, according to the American Gas Association industry group. Renewable natural gas is currently between four and seven times more expensive to produce than fossil gas, a gap that its proponents hope will narrow as the fuel becomes more widely used.

California’s SoCalGas, the nation’s largest natural gas distribution utility, is one of the industry’s top proponents of the alternative fuel. It has committed to making renewable natural gas 20 percent of its supply by 2030, said Sharon Tomkins, vice president of strategy and engagement.

She said California has enough biomethane potential “to make a significant dent in reducing the overall emissions from both the agricultural sector as well as reducing the carbon intensity of our gas stream.”

Across the country, Vermont Gas hopes to one day supply only renewable natural gas, leveraging the state’s preponderance of dairy farms. The utility’s renewable natural gas supply currently stands at less than 1 percent of overall volumes, according to spokeswoman Beth Parent. But the company is helping large energy buyers in the state, like cleaning products maker Seventh Generation, Middlebury College and Vermont Coffee Company transition to using biomethane.

“It’s good for their business,” said Marcus Gillette, spokesman for the Coalition for Renewable Natural Gas, an industry lobbying group. “Many are on missions to decrease emissions from their side of the energy sector as much as possible.”

Until now, nearly all the market for biomethane has come from bus fleets and other vehicles that are able to use state and federal subsidies to make the fuel competitive with fossil gas. Production of the fuel doubled between 2015 and 2018 to 304 million ethanol gallons equivalent thanks to the incentives, according to a report from consulting firm Bates White.

Today about three quarters of renewable natural gas production is still used for transportation, though Gillette said that is shifting as more utilities seek to provide it for heating, cooking and industrial uses.

Some states are more aggressive in bolstering the renewable natural gas industry than others.

Oregon, for example, passed a bill in August that sets a goal of making renewable natural gas account for 30% of what is carried in the state’s gas pipeline network by 2050.

California, meanwhile, has mandated a 40 percent reduction in methane emissions by 2030, something that will spell specific regulatory curbs on agriculture in the coming years. Methane accounts for about 9 percent of the state’s greenhouse gas emissions, half of which comes from livestock.

For Airoso, that made tapping into the growing biomethane market an easy decision. “We’ve got a $10 mln investment here, so I had to figure out how I protect my investment,” he said.