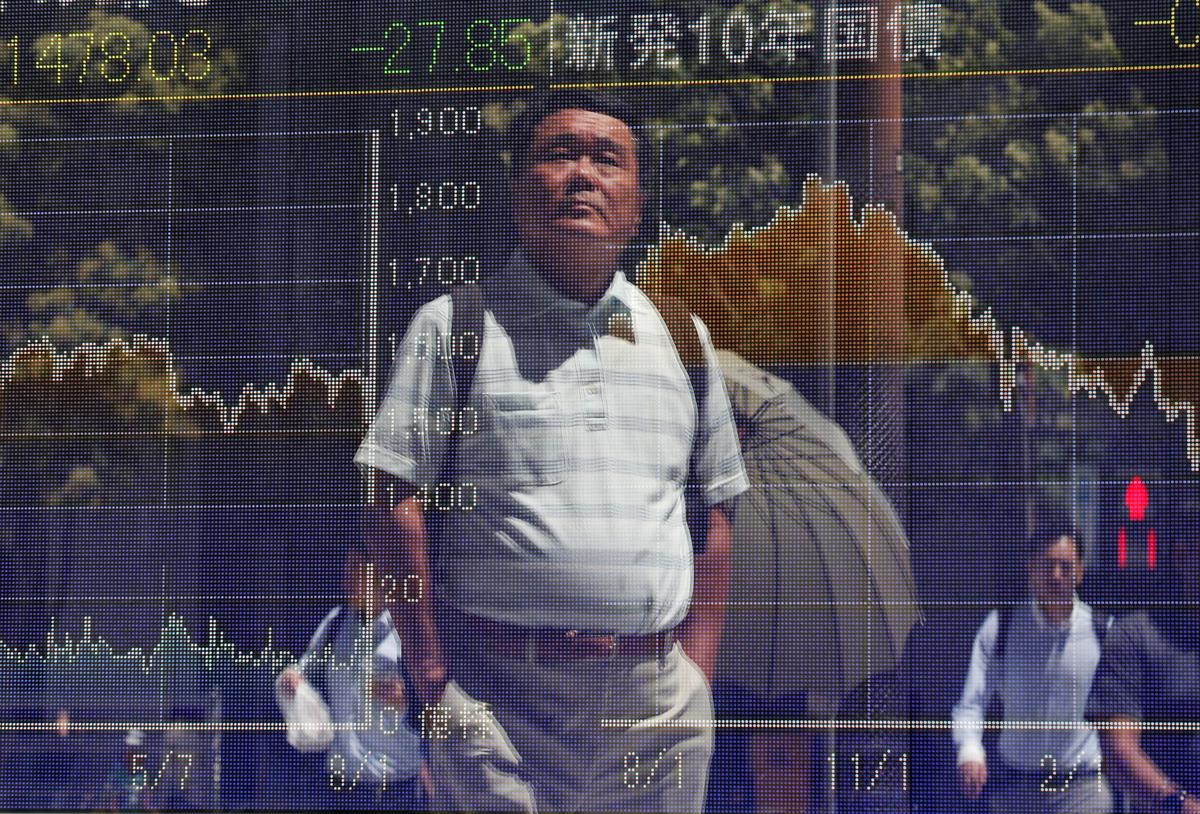 FILE PHOTO: Passersby are reflected on a screen displaying graphs of market indices outside a brokerage in Tokyo, Japan, August 6, 2019. REUTERS/Issei Kato

Microsoft also posted forecast-beating profit and revenue numbers after the closing bell though the outlook was darkened by slower-than-expected take-up of its Azure cloud services.

RBC Capital Markets’ chief economist Tom Porcelli pointed to consistently alarming headlines since the first quarter of 2018 suggesting poor Caterpillar earnings meant a recession was round the corner, though that has yet to transpire.

“We have been down this road before with CAT,” Porcelli said in a note titled ‘Still Waiting For Recession.’

“If you keep saying a recession is here, it is a mathematical certainty that at some point you will be right,” he wrote. “Maybe try again after CAT’s next quarterly earnings report.”

So far, results from about 125 of the S&P500 companies are out with analysts expecting earnings to have declined 2.9% year-over-year, according to IBES data from Refinitiv.

Risk appetite was also aided by a ceasefire in northern Syria which resulted in the lifting of U.S. sanctions against Turkey.

Later in the day, European and U.S. manufacturing numbers are due while the European Central Bank meets, with no change to policy expected at President Mario Draghi’s last meeting. Draghi will be replaced by Christine Lagarde.

Activity in the currency market was rather muted.

Sterling paused at $1.2918 after rising 0.3% on Wednesday with Brexit developments in focus.

Britain appears closer than ever to resolving its 3-1/2-year Brexit conundrum but there are still hurdles to clear.

EU member states on Wednesday delayed a decision on whether to grant Britain a three-month Brexit extension. Prime Minister Boris Johnson said if the deadline is deferred to the end of January, he would call an election.

“The Brexit battle looks like it will drag on,” economists at ANZ wrote in a note.

“The UK government will not meet its current timetable of leaving the EU on 31 October, and an extension appears likely. In the meantime, Brexit uncertainty will keep weighing on UK business investment and activity.”

That left the dollar index mostly unchanged at 97.461 against a basket of six major currencies.