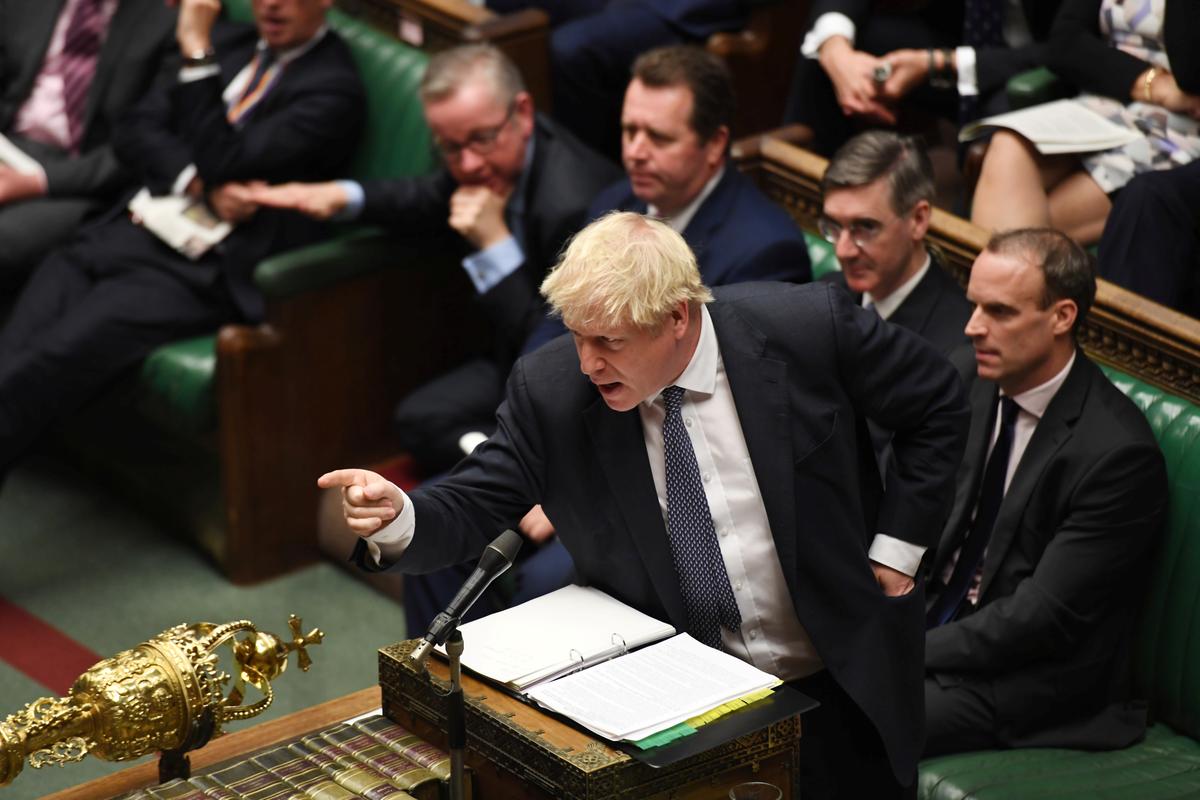 LONDON (Reuters) – Prime Minister Boris Johnson called on Thursday for a general election on Dec. 12 to break Britain’s Brexit impasse, a goal the leader has sought but so far failed to push through parliament.

Johnson said in a letter to opposition Labour leader Jeremy Corbyn he would hand parliament more time to approve his Brexit deal but that lawmakers must back a December election, Johnson’s third attempt to try to force a snap poll.

Just a week before Britain was due to leave the European Union, the bloc looked set to grant Johnson a Brexit delay, something he has repeatedly said he does not want but was forced to request by the country’s divided parliament.

An election is seen by his team as the only way of breaking the deadlock over Brexit after parliament voted in favour of his deal, but then, just minutes later, rejected his preferred timetable which would have met his Oct. 31 deadline.

But he has twice failed before to win the votes in parliament for an election, where he needs the support of two-thirds of its 650 lawmakers. The main opposition Labour Party has repeatedly said it will only back an election when it is sure that he cannot lead Britain out of the EU without a deal.

“We will make available all possible time between now and 6 November for the WAB (Withdrawal Agreement Bill) to be discussed and voted through … this means we could get Brexit done before the election on 12 December,” Johnson wrote in a letter to Corbyn, posted on Twitter.

“But if parliament refuses to take this chance and fails to ratify by the end of 6 November, as I fear it will, then the issue will have to be resolved by a new parliament.”

More than three years after voting 52%-48% to be the first sovereign country to leave the European project, the future of Brexit is as unclear as ever with Britain still debating when, how or even whether it should go ahead.

Johnson won the top job in July by staking his career on getting Brexit done by Oct. 31, though he is almost certain to fail to do that after parliament defeated his proposed legislative timetable on Tuesday.

Several of his aides think he can weather any criticism for failing to meet the deadline at an election by arguing that he was thwarted by lawmakers, doubling down on his pre-election narrative pitting the “people versus the parliament”.

At a meeting of his political cabinet of top ministers, there was disagreement over whether the government should try for an early election, fearing that going to the polls before Brexit was settled might damage the governing Conservatives.

But, with another Brexit delay in the offing, local media reported there was eventual agreement that a new election was the only way forward to try to re-set the parliament, which voted down Johnson’s predecessor’s deal three times.

Labour has long said it cannot back an election until a so-called no deal Brexit is off the table. But if the EU grants an extension until the end of January, that would appear to remove the threat of Johnson taking Britain out of the bloc without an agreement.

The timing of any election was also going to be determined largely by the EU and its decision on the length of any extension: Berlin supports a three-month delay, while Paris is pushing for a shorter one.

While both German Chancellor Angela Merkel and French President Emmanuel Macron appear to be fatigued by Brexit, they fear a no-deal exit that would almost certainly hurt global growth, roil financial markets and create a potentially deeper EU crisis.

To offer Britain a long extension would take the pressure off British lawmakers to approve Johnson’s deal and open up possibilities such as a referendum on it. A short extension might focus minds in the British parliament.

Brexit was initially supposed to have taken place on March 29 but Johnson’s predecessor Theresa May was forced to delay twice – first to April 12 and then to Oct. 31 – as parliament defeated her Brexit deal by margins of between 58 and 230 votes earlier this year.

Johnson was forced by parliament on Saturday to send a letter to European Council President Donald Tusk requesting a delay until Jan. 31. He did so reluctantly, sending an unsigned photocopied note, but the correspondence was accepted.

“Our policy remains that we should not delay,” Johnson told parliament on Tuesday after parliament defeated his extremely tight legislative timetable for ratifying the deal he clinched in Brussels a week ago.