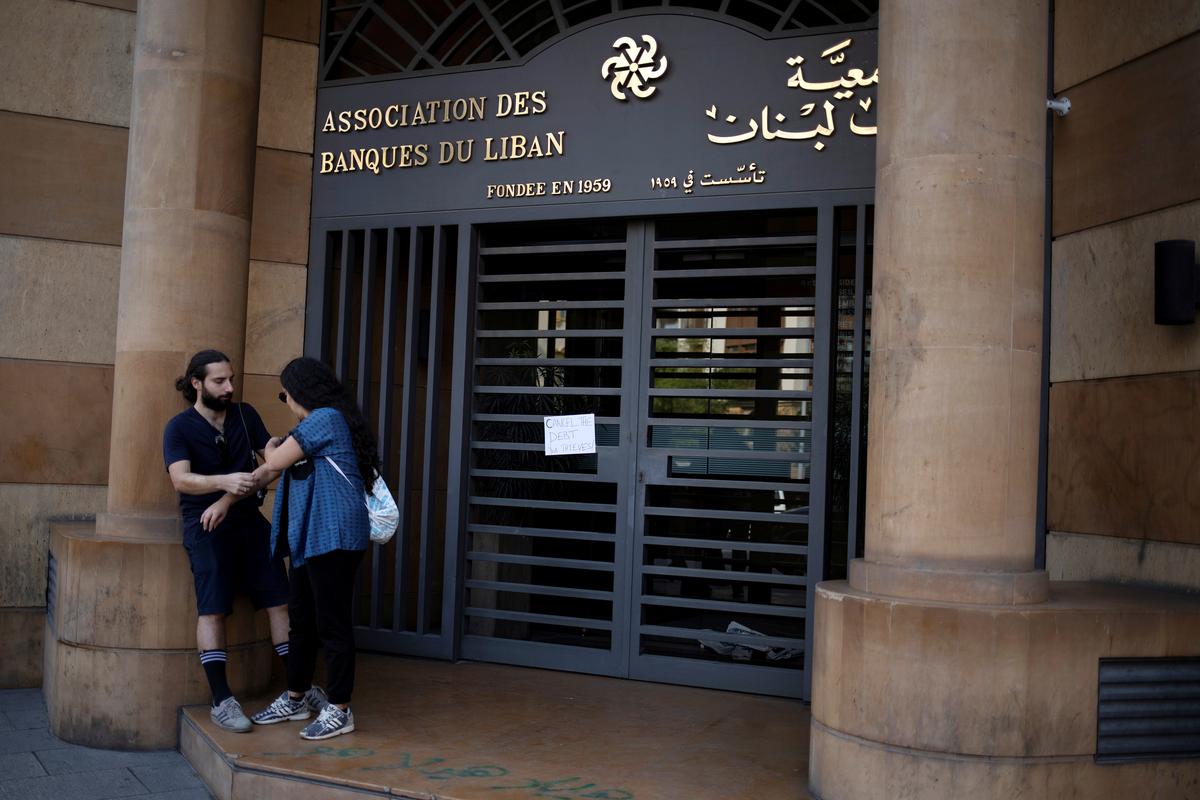 LONDON (Reuters) – Lebanon’s economic crisis is a litmus test for the resilience and domestic support of its banks as well as their potential for sparking contagion abroad.

A couple stands outside the closed entrance of the Association of Banks in Lebanon in downtown Beirut, Lebanon, October 25, 2019. REUTERS/Alkis Konstantinidis

The government has responded by promising reforms which involve banks stumping up 5.1 trillion Lebanese pounds ($3.4 billion) toward deficit reduction in next year’s budget, partly through a rise in tax on their profits.

“These measures should weaken the banking sector as they will cut into their profit margins over the next year,” said Natasha Smirnova, portfolio manager at PineBridge Investments, pointing out the levy was just a one off for next year.

Financial services make up 8% of gross domestic product in the country of 6 million. Bank deposits to GDP stand at 243%, the third highest ratio globally after Luxembourg and Hong Kong.

“Banks have an enormous role in government funding, as they are almost their only source of financing, and the cabinet/ central bank will proceed with utmost caution so they do not hurt the sector too much,” Smirnova added.

But while banks in Lebanon have an unusually wide geographic spread due to its estimated diaspora of around 14 million, their closure so far appears to pose relatively little threat to wider financial stability.

The Lebanese have a long history of emigration and settling around the world, with large, mostly Christian, expatriate populations in Brazil and the United States in addition to Shi’ite communities in Africa.

“Lebanese banks have significant operations in the region, but this is mainly through a subsidiary model, where those operations are ring-fenced,” said Farouk Soussa, senior economist with Goldman Sachs. “This minimizes the risk of financial contagion either way.”

Bank Audi – Lebanon’s biggest bank by assets – operates in 11 countries including Saudi Arabia, Egypt, France and Switzerland. Its annual report showed that of its total assets of $47.2 billion, nearly 70% came from Lebanon at the end of 2018 compared to just over 60% the previous year.

Its Turkish arm Bank Odea, in which Bank Audi holds a 75% stake, accounted for nearly 13% of assets while Egypt accounted for 8.2%. However, the share of both countries in total assets had declined due to currency depreciation.

“Bank Audi’s branches and subsidiaries abroad are stand alone entities and are therefore not affected by the crisis Lebanon is currently witnessing,” it said on Friday in response to questions from Reuters.

Blom Bank operates in around 10 countries including Britain and Romania. But of the bank’s $36.7 billion of assets at the end of 2018, nearly 83% came from Lebanon, with another 9% from MENA, including Egypt, Jordan and Iraq.

Asked what effect the crisis in Lebanon was having on its branches and subsidiaries abroad, Blom Bank said it had “witnessed an increase in its foreign operations”, without giving any further details.

Bank of Beirut in 2011 bought Australia’s Bank of Sydney, which offers mortgages, home loans and savings accounts and states on its website that deposits were covered by the Australian Government Deposit Guarantee.

Salim Sfeir, chairman of Bank of Beirut and the Association of Banks in Lebanon said he expected banking operations will fully resume once banks re-opened. Bank Audi said it was servicing and replenishing ATMs, collecting cheques deposited at smart ATMs and “processing emergency requests”.

Many of Lebanon’s lenders focus on banking expatriates rather than being systematically entangled in the financial ecosystems of other nations.

The other factor limiting the potential repercussions of the stresses in the Lebanese banking system is that many western banks have limited exposure to the country, which was shattered by civil war between 1975 and 1990.

“It might make you think of Ireland where banking sector stress will completely bring down the whole economy,” said Nafez Zouk at Oxford Economics.

“But Lebanon’s banking sector is pretty plain vanilla – it is not risky, there is lot of macro-prudential regulation…it’s very, very pure and simple banking.”

Of the major western banks, Citigroup remains one of the few with a presence, with 35 staff offering corporate and investment banking as well as trade finance, the U.S. bank’s website shows.

JPMorgan has just a handful of people based in Lebanon, who work in Treasury Services, which is part of wholesale payments.

Others have withdrawn altogether.

HSBC sold its Lebanon subsidiary to Blom Bank some two years ago, while banks from other Arab countries have also dialed down their activities.

Some are pointing to cooling relations between Beirut and some of its historic allies such as Saudi Arabia over Hezbollah and the group’s growing influence in Lebanon’s government.

Qatar National Bank, the largest bank in the Middle East, still has operations in Lebanon, yet a spokesman said on the ground it has just one branch with limited business.

“The situation in Lebanon is idiosyncratic and unlikely to have any contagion on emerging markets as we have seen historically with political developments there,” PineBridge’s Smirnova said.