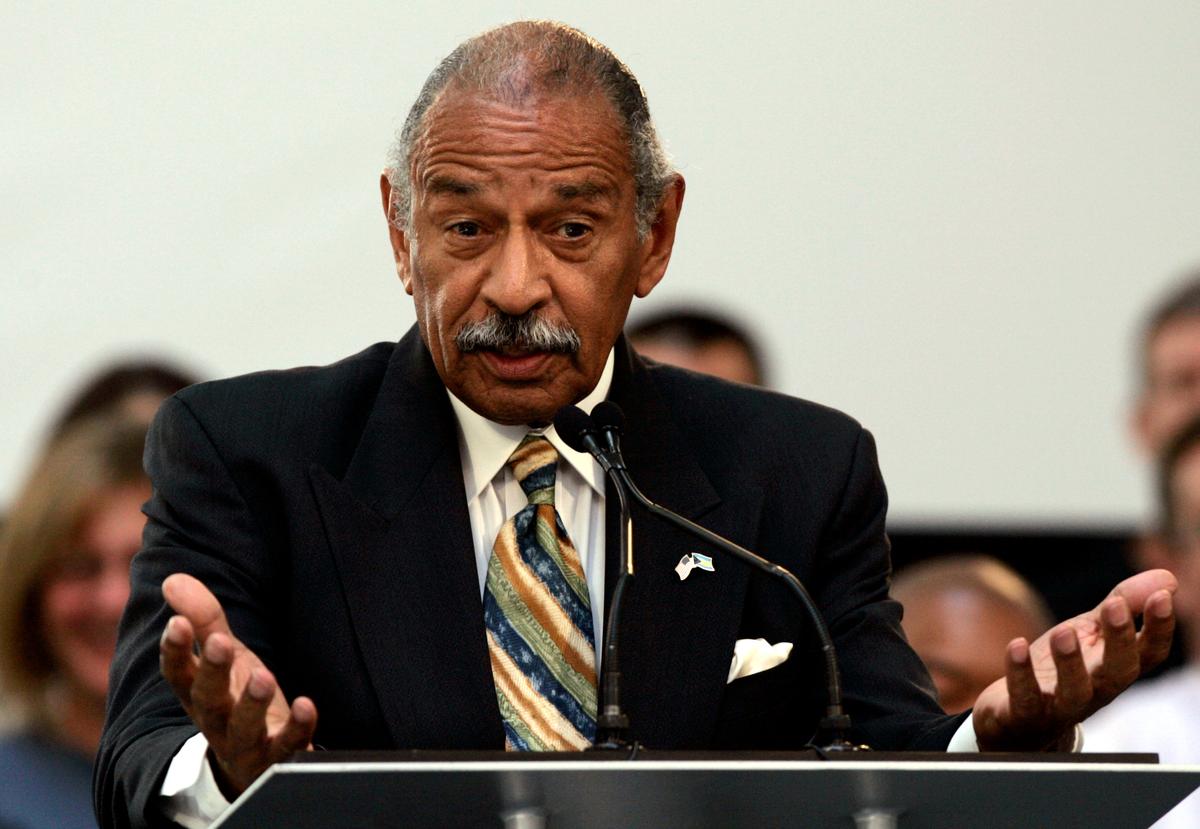 WASHINGTON (Reuters) – John Conyers, a liberal Democrat who was the longest-serving African-American member of the U.S. House of Representatives, serving for more than half a century, died on Sunday at the age of 90.

FILE PHOTO: U.S. Representative John Conyers addresses the audience during a program to announce the first round of loan commitments to transform older factories during a news conference at the Ford Motor Research & Innovation Center in Dearborn, Michigan June 23, 2009. REUTERS/Rebecca Cook/File Photo

Conyers joined the House in 1965 and stepped down in 2017, after his reputation was sullied by sexual harassment accusations. The Detroit-area congressman was a founding member of the Congressional Black Caucus.

“I was deeply saddened by the passing of Congressman John Conyers today,” Detroit Mayor Mike Duggan said in a written statement released by his office.

“From co-founding the Congressional Black Caucus to leading the fight in Congress to enshrine Martin Luther King’s birthday as a national holiday, John Conyers’ impact on our city and nation will never be forgotten,” Duggan said.

Just days after King was assassinated in 1968, Conyers introduced legislation to create a holiday honoring the civil rights leader. Conyers pursued the matter for 15 years until President Ronald Reagan signed it into law in 1983.

Civil rights pioneer Rosa Parks, who famously refused to give up her seat to a white passenger on a Montgomery, Alabama, bus in 1955, worked on his Detroit staff for more than two decades before retiring in 1988.

In November 2017, the House Ethics Committee said it was investigating allegations of sexual harassment against Conyers, who said his office had resolved a harassment case with a payment but no admission of guilt.

The allegations arose as Congress reviewed how to handle sexual harassment complaints and followed a string of similar accusations against prominent figures in the U.S. media, Hollywood and politics. Conyers stepped down on Dec. 5, 2017, although saying the harassment allegations were “not true.”

Conyers had been doggedly critical of the U.S. drive to launch the Iraq war, calling in 2005 for Congress to censure President George W. Bush and Vice President Dick Cheney for misleading lawmakers and the American people.

The Bush administration’s central justification for the war, begun in March 2003, was the threat posed by Iraq’s weapons of mass destruction. No such weapons were found.

In June 2005, Conyers held a public forum on the “Downing Street memo” – minutes of a 2002 meeting of British Prime Minister Tony Blair and his top security officials stating that Bush’s team was intent before the Iraq war on fixing “the intelligence and the facts … around the policy” of invading.

“Many of us find it unacceptable for any administration – be it Democratic or Republican – to put our brave men and women in harm’s way based on false information,” said Conyers, a Korean War veteran.

But as he prepared to take over as chairman of the Judiciary Committee after Democrats regained control of the House in the November 2006 elections, Conyers said any impeachment effort against Bush was “off the table.”

Conyers, who was first elected to the House in 1964, was the only House member to serve on two committees handling presidential impeachments: for Republican Richard Nixon in 1974 over the Watergate scandal and for Democrat Bill Clinton in 1998 over his relationship with a female White House intern.

Conyers favored the impeachment of Nixon, who become the only president to resign, and was included on Nixon’s infamous “enemies list.”

He fought against the impeachment of Clinton, calling it a coup attempt by Republicans. The Senate ultimately declined to remove Clinton from office.

Critics felt the Detroit native and son of an autoworkers’ union official was, as writer Joe Klein put it in Time magazine, “foolishly incendiary.” Supporters felt otherwise. Marcus Raskin of the Institute for Policy Studies think tank told Newhouse News Service in 2006: “He’s a cannon but he’s not loose.”

Conyers, a lawyer, became the first black lawmaker to serve as House Judiciary Committee chairman, although a criminal case involving his wife caused him embarrassment at the time.

Monica Conyers, a former Detroit city councilwoman, was sentenced in 2010 to 37 months in prison for accepting bribes from a waste management company trying to win city business. The Justice Department said there was no evidence the congressman knew about his wife’s conduct.

Conyers led the 1989 impeachment and removal of a black federal judge, Alcee Hastings, for corruption. Hastings later was elected to the House. Conyers also proposed a commission to consider reparations for descendants of slaves.

Reporting by Will Dunham in Washington; Additional reporting by Dan Whitcomb in Los Angeles; Editing by Peter Cooney