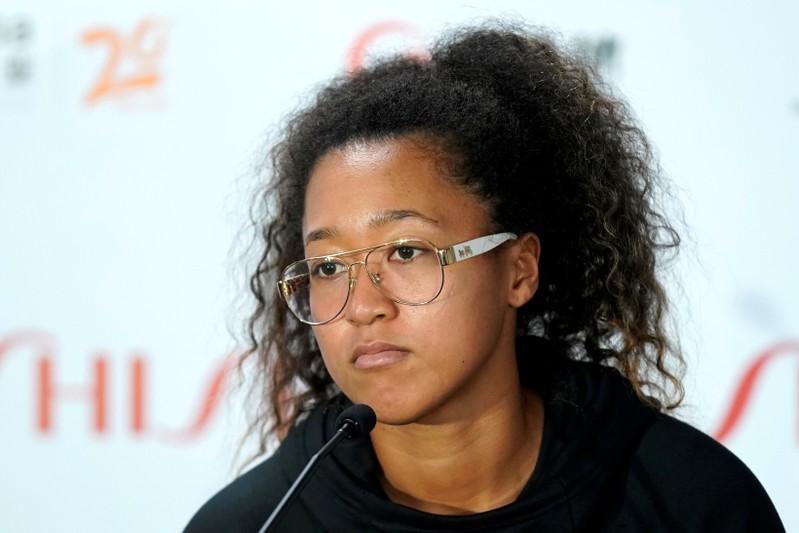 HONG KONG (Reuters) – Naomi Osaka’s struggles at the WTA Finals continued on Tuesday as the world no. 3 was forced to withdraw from this year’s tournament in Shenzhen with a shoulder injury.

Her exit from the competition comes two days after the Japanese right-hander won her opening match against Petra Kvitova, the first time she had secured victory at the season-ending competition.

“It’s not ideal,” said Osaka, who lost all of her matches on her debut in Singapore 12 months ago.

“This is the second time I had to withdraw from the finals. I mean, the last time I at least played, so a retirement instead of a withdrawal.

“It kind of sucks because I thought I was playing well. I definitely wanted to win here.”

Osaka made her first appearance at the WTA Finals last year after winning the US Open but lost her first two matches before pulling out midway through a match with Kiki Bertens with an injury.

On Sunday evening she ground out a 7-6 (1), 4-6, 6-4 win over Kvitova to give herself a shot at progressing to the semi-finals, but a recurrence of a shoulder issue which first surfaced during the China Open this month meant the 23-year-old could not continue.

“I did this in the finals of Beijing,” Osaka said.

“I didn’t serve for a while when I was in Japan. I just started serving the last two days. Felt better, came here, then I played my match.

“I felt it immediately. When I woke up the day after, it was like throbbing and stuff. Didn’t serve at all yesterday. Hit for like five minutes.”

Despite ending the season on a sour note, Osaka leaves Shenzhen able to look back on a successful year.

She won the Australian Open in January and was ranked world No. 1 in the world before putting a drop-off in form mid-season behind her with tournament wins at the Pan Pacific Open in Japan and the China Open.

“Surprisingly, I think this year is better than last year, even though I cried way more this year than I did last year,” she said.

“I also think that’s a lesson that I learned. It’s just like you have the opportunity to change the things that are happening to you, even though it might not seem like it at the moment. I definitely think that this year was somehow better.”

Osaka’s place in the Red Group is taken by Bertens, and the Dutch player will face current world No. 1 Ashleigh Barty on Tuesday evening before meeting Belinda Bencic on Thursday.