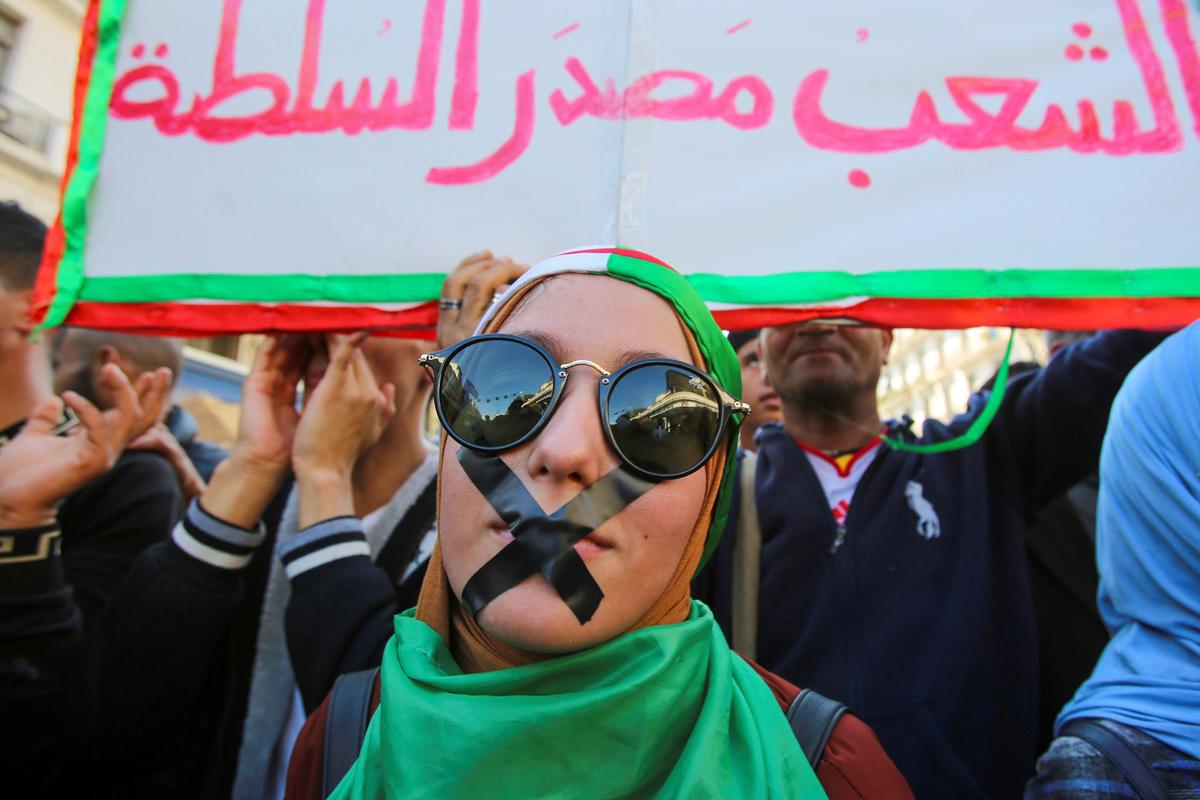 ALGIERS (Reuters) – Riad Mostefai has marched through the capital of Algeria every Friday since February to demand a purge of the ruling hierarchy, an end to corruption and the army’s withdrawal from politics.

A demonstrator with tapes over her mouth takes part in a protest against the country’s ruling elite and to demand an end to corruption and the army’s withdrawal from politics in Algiers, Algeria October 29, 2019. REUTERS/Ramzi Boudina

Though some of his demands have been met, Mostefai plans to keep on marching each week along with tens of thousands of others who don’t believe an election in December will change anything, as long as an opaque ruling elite remains in charge.

“We’re continuing to protest because we don’t trust the system. It might regenerate,” said the 23-year-old apprentice hairdresser.

Since the popular protests started, Algeria’s veteran president Abdelaziz Bouteflika has quit after two decades in power, many of his coterie have been arrested for corruption and his once all-powerful security chief is behind bars.

Now, the old guard, known by Algerians as “Le Pouvoir”, or “The Power”, hope the Dec. 12 presidential election will end a state of constitutional limbo and create a government with enough legitimacy to wear down the demonstrators.

But with six weeks to go, the election is increasingly regarded by both sides as a pivotal test of strength after the most sustained public demand for peaceful change in decades.

The nebulous, leaderless opposition movement known as Hirak in Arabic has rejected the election, saying it won’t be free or fair under the ruling hierarchy and that it hopes a small turnout will compel the authorities to accept bigger changes.

The government, meanwhile, has been increasing the pressure on the protesters since the summer by ramping up the police presence at marches, arresting dozens of demonstrators and also detaining prominent opposition figures.

An informal network of politicians, generals and security chiefs has dominated Algeria since independence and in 1992 they canceled an election hardline Islamists were on course to win, leading to a protracted civil war in which 200,000 were killed.

For some of the hundreds of thousands who marched at the peak of the protests in the spring, the departure of Bouteflika in April and the jailing of his senior allies was enough for them to stop.

“I think Hirak has achieved most of its goals, now we need to move forward,” said Jalal Alalou, one Mostefai’s friends.

About 22 candidates have registered for the presidential poll and, for the first time, none is from Algeria’s liberation movement, the FLN, that won independence from France in 1962 after a bloody eight-year guerrilla struggle.

The country’s army, which has long been an influential political powerbroker, has also said it won’t back any specific candidate to try to convince voters the election will be fair.

But that’s not enough for others still committed to the protests.

“Those who are no longer marching with us are wrong because they think the departure of Bouteflika and his men is enough. They are wrong. We must finish the job,” said Chawki, 23, a student at Blida University, 25 km (16 miles) south of the capital Algiers.

“Bouteflika was a cancer. He has been removed. Now we need chemotherapy to kill the cells. This is why we must continue the protests,” he said.

Both students, who declined to give their family names, said they want all senior figures associated with Bouteflika to leave office and for the army to step back from politics, before they will accept the December election.

“No one can be against elections to end the crisis and move forward but we believe conditions for free and fair elections are not secured yet,” said Chawki.

For Mostefai, the protests represent an opportunity for Algeria, the biggest country in Africa, to join the club of democracies, with civilian governments that operate within the rule of law.

He is from the Jolie Vue area near downtown Algiers, one of six children living in a modest apartment with their retired parents. Like most of the country’s modern leaders, his father is a veteran of the fight for independence.

This Friday, the anniversary of the start of the uprising against French colonialism on Nov. 1, 1954, the opposition is seeking a particularly big protest in an effort to seize that mantle of freedom from the old guard.

His family’s economic frustrations, such as his failure to find a job and his father’s small pension of $290 a month, have added to Mostefai’s determination to secure sweeping changes in a country that is a major oil and gas exporter and OPEC member.

Corruption provoked much of the outrage behind this year’s protests as many Algerians believed it was getting worse in recent years as the government carried out economic reforms to encourage the private sector.

Economists said the changes were necessary to reduce the state’s reliance on oil, which accounts for 85% of Algeria’s exports. But as members of the ruling elite, their relatives and friendly businessmen made fortunes, people grew angry.

Algeria came in at 105th out of 180 countries in Transparency International’s corruption perceptions index last year with a score of 35 out of 100, below the average for the Middle East and North Africa.

Demonstrators carry a national flag and banners during a protest against the country’s ruling elite and to demand an end to corruption and the army’s withdrawal from politics in Algiers, Algeria October 29, 2019. Picture taken October 29, 2019. REUTERS/Ramzi Boudina

“Our rulers have stolen the country’s resources. Algeria is rich but Algerians are poor,” Mostefai said.

Still, draped in the national flag as he marches each week, he acknowledges that broader change will be hard and that the protest movement lacks a clear strategy.

“We understand that it has to stop one day, but not now. Bouteflika’s men must go first … We have launched the Hirak, but we don’t know how to end it,” he said.