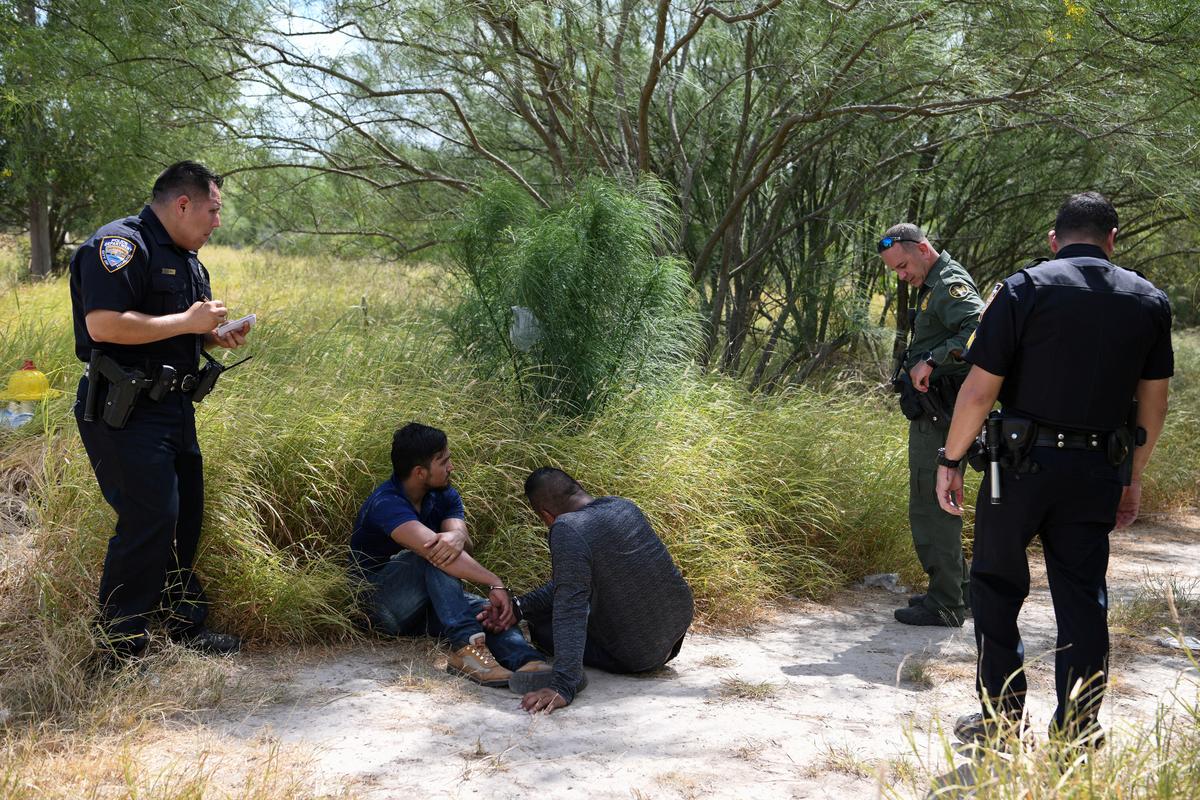 EL PASO, Texas (Reuters) – Immigration arrests at the U.S. border with Mexico soared 88 percent in fiscal 2019 in what U.S. officials on Tuesday labeled a crisis while unveiling their latest measure to combat the trend: expediting the deportation of asylum seekers.

FILE PHOTO: Migrant men sit on the ground after being detained by law enforcement for illegally crossing the Rio Grande and attempting to evade capture in Hidalgo, Texas, U.S., August 23, 2019. REUTERS/Loren Elliott/File Photo

The number of people apprehended or turned away at the border actually fell in September to the lowest monthly total of the year, to 52,546, down 64% from a peak in May as migration typically slows during the hot summer months.

But the total still rose 4% over the same month a year ago, and border arrests for the fiscal year ending in September reached an 11-year high. Southern border apprehensions and rejections combined totaled 977,509.

Nearly half all those detained in September were children or families, many of them led by human-trafficking cartels, said Robert Perez, deputy commissioner of U.S. Customs and Border Protection.

“They are profiting on the backs of this vulnerable population, and that’s why it’s still a crisis,” Perez told an outdoor news conference, standing before CBP personnel at the border barrier in El Paso.

President Donald Trump has made restricting immigration a centerpiece of his first term and his 2020 re-election campaign, and U.S. officials and immigrant advocates alike say his policies and cooperation from Mexico have contributed to four straight months of declining arrests.

While Trump’s supporters cheer his crackdown on illegal border-crossings, critics have attacked his policies as cruel, resulting in overcrowded detention facilities and the separation of children from their parents.

U.S. policy has targeted asylum seekers, most of them from the impoverished and violent Central American countries of Guatemala, Honduras and El Salvador.

Now U.S. officials say they hope to speed up the processing of some asylum claims to just a few days, compared to the months or years it takes currently, in a shift that has raised concerns over due-process rights.

“The objective is within that same handful of days … to get people through an immigration process as quickly as we possibly can, so that a judge, hopefully, makes a decision,” Perez said.

Some immigration attorneys say they have yet to receive notification of the program, and that clients were placed in it without their knowledge.Attorneys also said they had only been given telephone access to clients.

U.S. Representative Veronica Escobar, a Democrat from El Paso, raised “pressing concerns” in a letter to Morgan after her staff received an informal Border Patrol briefing.