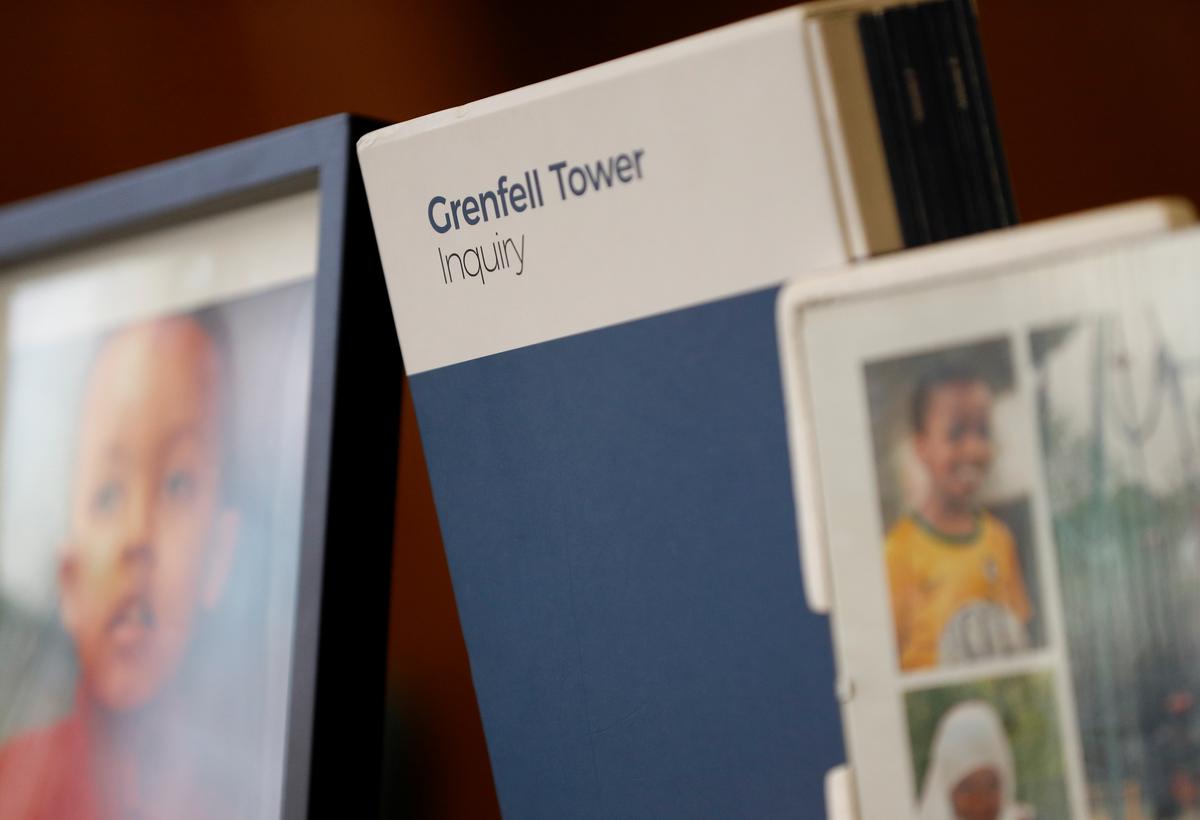 LONDON (Reuters) – Combustible materials used to refurbish London’s Grenfell Tower were central to the catastrophic chain of events in June 2017 that turned an ordinary kitchen fire into an inferno that killed 71 people, an official inquiry said on Wednesday.

A copy of the Grenfell Tower inquiry is seen during a news conference in London, Britain October 30, 2019. REUTERS/Peter Nicholls

The blaze at Grenfell Tower, a 23-storey social housing block owned by one of London’s richest local authorities, shocked Britain and threw up a range of disturbing questions about how the building had been allowed to become a tinderbox.

“Grenfell Tower was home to a strong and vibrant community that was torn apart by the fire,” wrote inquiry chairman Martin Moore-Bick.

“In its origin, the fire at Grenfell Tower was no more than a typical kitchen fire,” the retired High Court judge wrote in his report on the first phase of the inquiry, which focused in forensic detail on events on the night of the blaze.

Having broken out late at night in a fourth-floor flat because of an electrical fault in a refrigerator, the fire spread to the outside of the building and raced up its facade, which had been fitted with a type of aluminium composite material cladding during a refurbishment completed in 2016.

Within 17 minutes of the first call to emergency services by the tenant of the flat, the fire had reached the 22nd floor, and six minutes after that it had reached the roof. From there, it engulfed the whole tower, reducing it to a charred ruin by morning.

Moore-Bick said there was compelling evidence that the external walls did not comply with building regulations. The cladding and accompanying insulation material were combustible, and there were vertical cavities that acted as chimneys for the fire to rise.

“They (the external walls) did not adequately resist the spread of fire having regard to the height, use and position of the building. On the contrary, they actively promoted it,” he wrote.

He did not apportion blame for the decision to use the materials in the refurbishment, but said the issue would be at the heart of the second phase of his inquiry, which is already under way and is expected to last about two years.

A criminal investigation into the Grenfell Tower disaster is also ongoing, although police have said no decision on charges will be made until the public inquiry process has concluded.

The Phase 1 report heavily criticized the London Fire Brigade, saying that preparations and training for an event like the Grenfell fire were inadequate and that poor decisions were made on the night.

The head of the brigade, Dany Cotton, called for far-reaching reforms to building and fire safety regulations at the national level.

“It was an unprecedented residential building fire, precipitated by significant failings of the building’s fire safety measures which created impossible conditions that residents and the emergency services must never be placed in again,” Cotton said in a statement.

Located in the wealthy area of Kensington, Grenfell Tower was home to a close-knit community that traced its roots to places as diverse as Britain, Afghanistan, Lebanon, Morocco, Gambia, Ethiopia, Italy and Trinidad.

The report paid tribute to the 71 people who died on the night – 70 adults and children who were unable to escape the tower, and one baby who was delivered stillborn after his eight-month-pregnant mother was evacuated through toxic fumes.

Critics have accused the Kensington local authority of neglecting the tower because of indifference towards its low-income, immigrant residents – prompting a wider public debate about Britain’s yawning rich-poor divide and class prejudice among officials.

Moore-Bick alluded to this context in his report, saying that the second phase of the inquiry would examine the issue of why warnings by the local community before the fire that Grenfell Tower was unsafe were ignored.

“There is a strong feeling among them that their voices were ignored and that if attention had been paid to them the disaster could have been avoided,” he wrote.