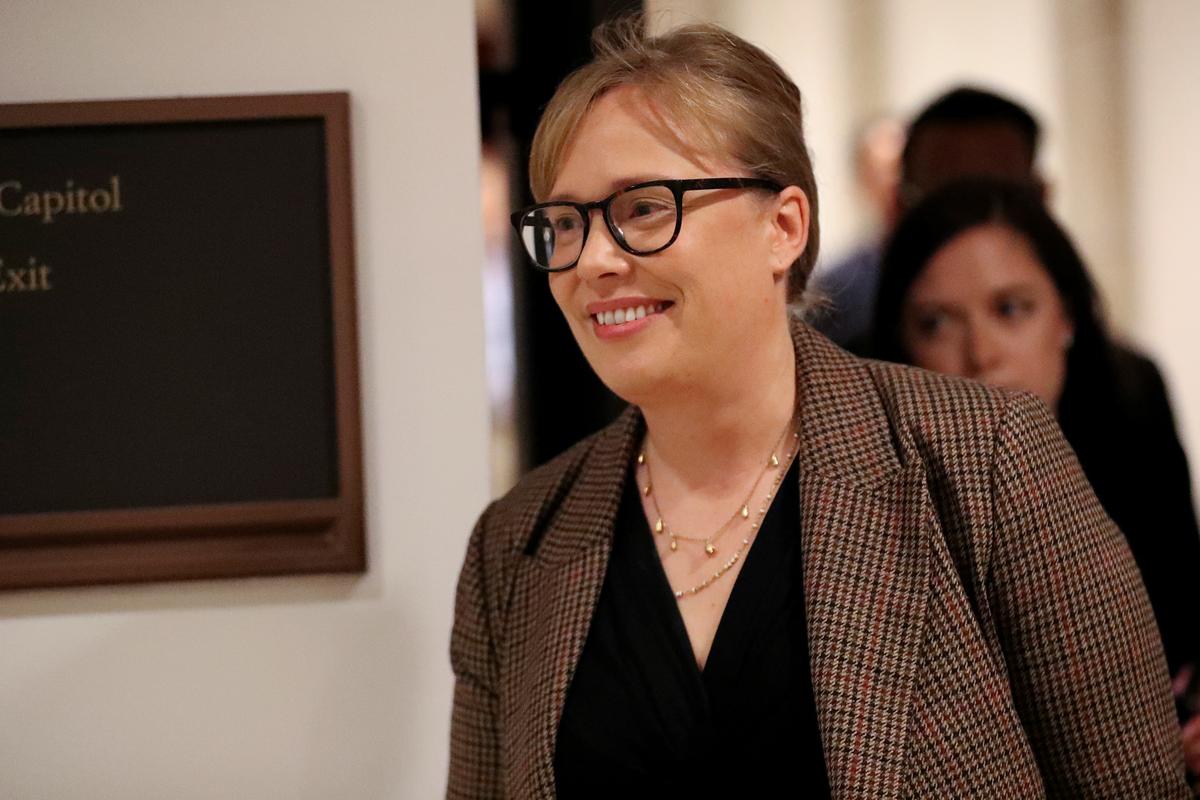 WASHINGTON (Reuters) – Two U.S. State Department officials will testify before House of Representatives investigators in the impeachment inquiry against President Donald Trump on Wednesday while lawmakers prepare to weigh rules formalizing the impeachment process ahead.

U.S. foreign service officer Catherine Croft, who once served as a deputy to then-Special Envoy for Ukraine Kurt Volker, arrives to testify as part of the U.S. House of Representatives impeachment inquiry into U.S. President Trump led by the House Intelligence, House Foreign Affairs and House Oversight and Reform Committees on Capitol Hill in Washington, U.S., October 30, 2019. REUTERS/Siphiwe Sibeko

Later on Wednesday, the House Rules Committee is scheduled to take up a resolution proposed by House Democrats laying out the procedures as they move forward with impeachment of the Republican president.

The two career diplomats are expected to lay out how State Department officials’ efforts to express support for Ukraine were stymied by the White House, The Washington Post reported, citing the pair’s prepared remarks.

The call is at the heart of the congressional inquiry into whether Trump misused the power of his office for personal political gain and, if so, whether that rises to the level of “high crimes and misdemeanors” that merit impeachment and removal from office under the Constitution.

Trump has denied any wrongdoing.

During the conversation, outlined in a memo released by the White House, Trump asked Zelenskiy to investigate Biden and his son Hunter Biden, who had served on the board of Burisma, a Ukrainian gas company.

He also sought an investigation into a debunked conspiracy theory that Ukraine, not Russia, interfered in the 2016 U.S. election. Zelenskiy agreed to Trump’s requests, according to the memo.

Trump made the request after withholding nearly $400 million in security aid approved by Congress to help Ukraine fight Russian-backed separatists in eastern Ukraine.

Vindman, who as a Ukraine specialist listened to the Trump-Zelenskiy call, told lawmakers on Tuesday the readout of the conversation released by the White House left out information he had sought to include, the New York Times reported.

The rough transcript left out an assertion by Trump that there were recordings of Biden discussing corruption in Ukraine and Zelenskiy’s explicit mention of Burisma, the Times said, citing three people familiar with his testimony.

More witnesses are expected later this week, including Timothy Morrison, the National Security Council Senior Director for Europe and Russia, on Thursday and Robert Blair, a senior adviser to acting White House chief of Staff Mick Mulvaney, on Friday.

The House is expected to vote this week on the formal process of moving forward with the impeachment inquiry after Republicans criticized the process as unfair to Trump.

Trump has urged his allies to directly tackle the allegations against him.

“This Impeachment nonsense is just a continuation of the Witch Hunt Hoax,” he tweeted Wednesday morning, urging Republicans to “go with Substance and close it out!”