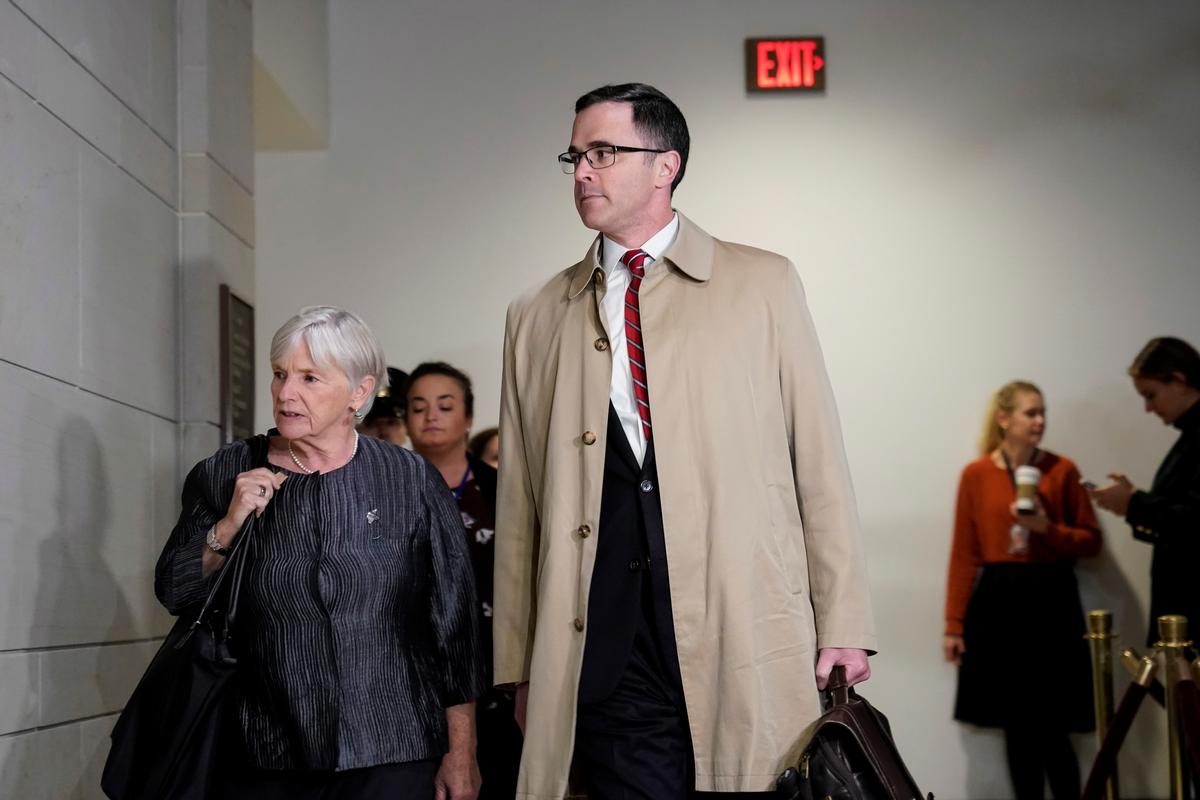 WASHINGTON (Reuters) – U.S. lawmakers will cast the first vote on Thursday in the impeachment investigation of President Donald Trump as the Democratic-controlled House of Representatives takes up a measure that sets up the next steps in the fast-moving effort.

Timothy Morrison, special assistant to the president and senior director for Europe and Russia at the National Security Council, arrives for a closed-door deposition as part of the impeachment inquiry into U.S. President Trump led by the House Intelligence, House Foreign Affairs and House Oversight and Reform Committees on Capitol Hill in Washington, U.S., October 31, 2019. REUTERS/Joshua Roberts

The vote will be the first formal test of support for the inquiry launched on Sept. 24. Democrats, who control 234 seats in the 435-seat chamber, need a simple majority to approve the resolution.

The measure calls for public hearings and the release of transcripts from closed-door proceedings. It also outlines what rights Republican lawmakers and Trump himself would have to participate as the process moves ahead.

Republicans have accused Democrats of trampling on Trump’s rights and keeping the process too secret.

Representative Jim McGovern, who authored the legislation to be voted on, said as the debate kicked off:”I do not take any pleasure in the need for this resolution.”

“There is serious evidence that President Trump may have violated the Constitution. This is about protecting our national security and safeguarding our elections,” McGovern, chairman of the House Rules Committee, said in a House speech.

Representative Tom Cole, the committee’s top Republican, complained that rules being set by Democrats for the impeachment procedure mark “a partisan exercise.”

“Today’s resolution fails to give the minority the same rights as were present during the Clinton impeachment and it fails to offer the same due process protections given to Presidents Nixon and Clinton,” Cole said referring to House investigations of former Presidents Richard Nixon and Bill Clinton.

The U.S. Constitution gives the House broad authority to set ground rules for an impeachment inquiry and Democrats say they are following House rules on investigations. They have promised to hold public hearings on the case against Trump.

The impeachment inquiry focuses on a July 25 telephone call, in which Trump asked Ukrainian President Volodymr Zelenskiy to investigate his Democratic political rival Joe Biden, a former U.S. vice president, and his son Hunter, who had served as a director for Ukrainian energy company Burisma.

Trump has denied wrongdoing and called the inquiry a sham.

Members of the three committees conducting the investigation expect Morrison to fill in more of the details about Trump’s dealings with Ukraine. Morrison listened in on the July 25 phone call and said the call “could have been better,” according to acting U.S. Ambassador to Ukraine Bill Taylor.

In testimony last week, Taylor also said that Morrison had confided to him on Sept. 7 that he had a “sinking feeling” after a phone conversation in which Trump told another ambassador he wanted Zelenskiy to “go to a microphone and say he is opening investigations of Biden and 2016 election interference.”

Morrison was mentioned 15 times in Taylor’s detailed statement to lawmakers, which described a diplomatic back channel through which Trump had made the release of $391 million in U.S. aid to Ukraine contingent upon Kiev publicly declaring it would investigate the Bidens.

Committee members have asked a far more prominent player, former national security adviser John Bolton, to appear next week. Others have testified that Bolton was alarmed by a White House effort to pressure the president of Ukraine to investigate Trump’s political rivals.

It was unclear whether Bolton would testify. His lawyer said he was not willing to appear unless a subpoena is issued.

If the House pursued impeachment, it would require a simple majority in the 435-member House to trigger a trial in the Republican-controlled Senate. Conviction requires the support of a two-thirds majority in the 100-member body.

The investigation is probing whether Trump misused the power of his office for personal political gain and, if so, whether that rises to the level of “high crimes and misdemeanors” that merit impeachment and removal from office under the Constitution.

Trump made his request to Zelenskiy for an investigation into the Bidens after withholding $391 million in security aid approved by Congress to help Ukraine fight Russian-backed separatists in eastern Ukraine. Zelenskiy agreed to Trump’s requests. The aid was later provided.