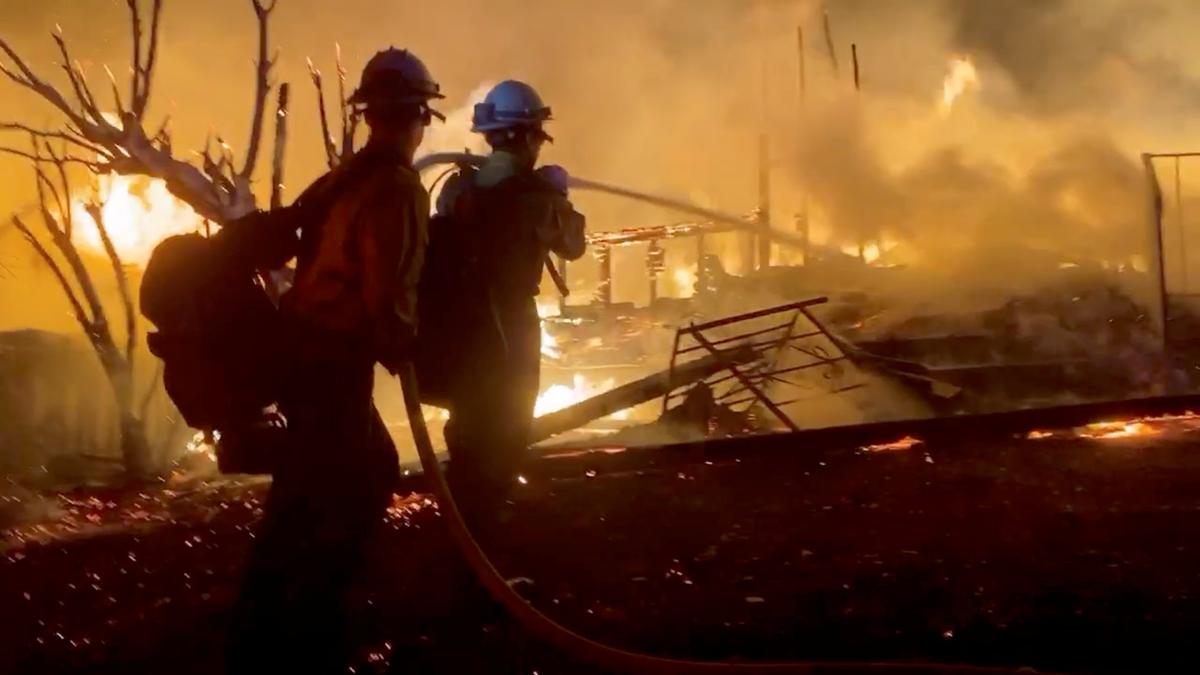 A fresh spate of wildfires had roared to life on Thursday in hilly neighborhoods outside Los Angeles, destroying homes and forcing yet more evacuations before the Santa Ana winds lost their punch overnight.

The Maria Fire swelled to torch more than 8,000 acres (3,240 hectares) of Ventura County after igniting on Thursday evening, threatening some 1,800 homes and other structures, according to the county fire department. About 7,500 residents were ordered to find lodgings elsewhere for Halloween night, and dozens of schools were closed on Friday.

East of Los Angeles, the Hillside Fire scorched more than 200 acres (80 hectares) of the San Bernardino National Forest, burning residential areas in the north end of the city of San Bernardino, destroying at least six homes on Thursday, the county’s fire department said.

Crews managed to carve containment lines around 50% of the fire’s perimeter. No injuries were reported.

The dry Santa Ana winds that howl down from the mountains every autumn in Southern California were forecast to abate on Friday, although there could still be fire-fuelling gusts of 15 to 20 miles per hour (25 to 32 km per hour), the National Weather Service said.

A fire that erupted early on Monday near the famed Getty Center art museum in west Los Angeles threatened thousands of homes in some of the city’s wealthiest neighborhoods but was largely suppressed, with containment listed at 40%.

Residents were allowed to return to most of the 10,000 homes that had been ordered evacuated. The museum emerged unscathed, but about a dozen dwellings were lost in the 745-acre (301-hectare) Getty fire and two firefighters were injured.

About 30 miles (50 km) to the northwest, a fire raged to the edge of the hilltop Ronald Reagan Presidential Library & Museum in Ventura County’s Simi Valley on Wednesday, threatening thousands of homes, but was 60 percent contained early on Friday. Firefighters doused flames before they could reach the library.

Pacific Gas and Electric Co (PCG.N) acknowledged last week that the Kincade Fire, a blaze that charred 77,000 acres (31,160 hectares) of Sonoma County wine country north of San Francisco, started last week near a damaged PG&E transmission tower at about the time a high-voltage line on that tower malfunctioned.

That blaze has burned more than 77,700 acres and destroyed at least 349 homes and other structures but was listed as 65% contained on Thursday evening.

PG&E, which over this past weekend began shutting off power to 940,000 California customers to guard against the risk of an electrical mishap sparking a blaze, said late on Thursday it had restored electricity to virtually all customers.