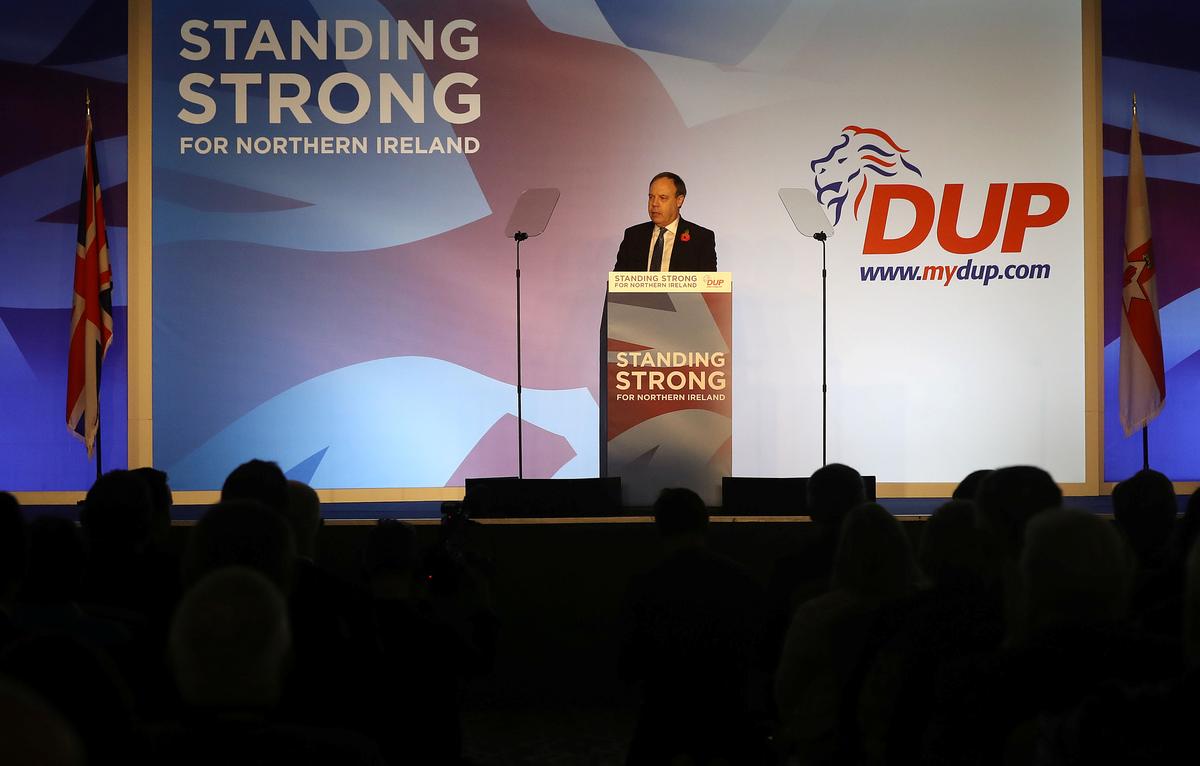 BELFAST (Reuters) – Division among Northern Ireland’s pro-British and pro-Irish parties over Brexit has prompted tactical electoral moves that put at risk some of the seats that had given the province’s Democratic Unionist Party (DUP) the balance of power in London.

The DUP, a mainly Protestant party that fervently favours continued British rule of Northern Ireland, used its 10 seats in parliament in London to help keep Prime Minister Boris Johnson’s Conservatives in power with a minority government.

But it accused Johnson of betrayal last month for agreeing a Brexit deal with the EU that would see European Union customs rates and regulations remain in place Northern Ireland while the rest of Britain goes its own way.

The DUP’s role in the Brexit negotiations left it open to accusations by rivals from all sides that it failed to safeguard the province’s interests, and created new opportunities for tactical voting in a Dec. 12 election to loosen its grip on a majority of the province’s 18 seats.

In the past, the DUP and the smaller Ulster Unionist Party have stood aside for one another to maximise the Unionist vote against mainly Catholic Nationalist parties that favour uniting Northern Ireland with the Irish Republic.

The Unionist parties support a Brexit deal that keeps Northern Ireland aligned with the rest of the United Kingdom, while the Nationalist parties oppose Brexit altogether.

Incoming UUP leader Steve Aiken initially pledged to field candidates in every constituency, potentially splitting the Unionist vote, although he has since opted out of contesting at least one DUP stronghold.

Sinn Fein, which said it was standing up for the 56% of Northern Irish voters who opposed Brexit in 2016, won seven seats last time out despite a long-standing policy of not taking its seats in Britain’s parliament.

The small, pro-EU Greens became the latest party to skip a tight race on Tuesday, hoping the 5% share its leader won in South Belfast in 2017 will help the SDLP regain its seat from the DUP in a constituency Sinn Fein is avoiding.

The moves will also put pressure on DUP deputy leader Nigel Dodds, a major player in the Brexit debate in London over the past two years. His Belfast constituency marginally sought to remain in the EU.

“These are extraordinary times that demand an extraordinary response,” Green Party leader Clare Bailey said on Tuesday when joining the unprecedented series of tactical moves.