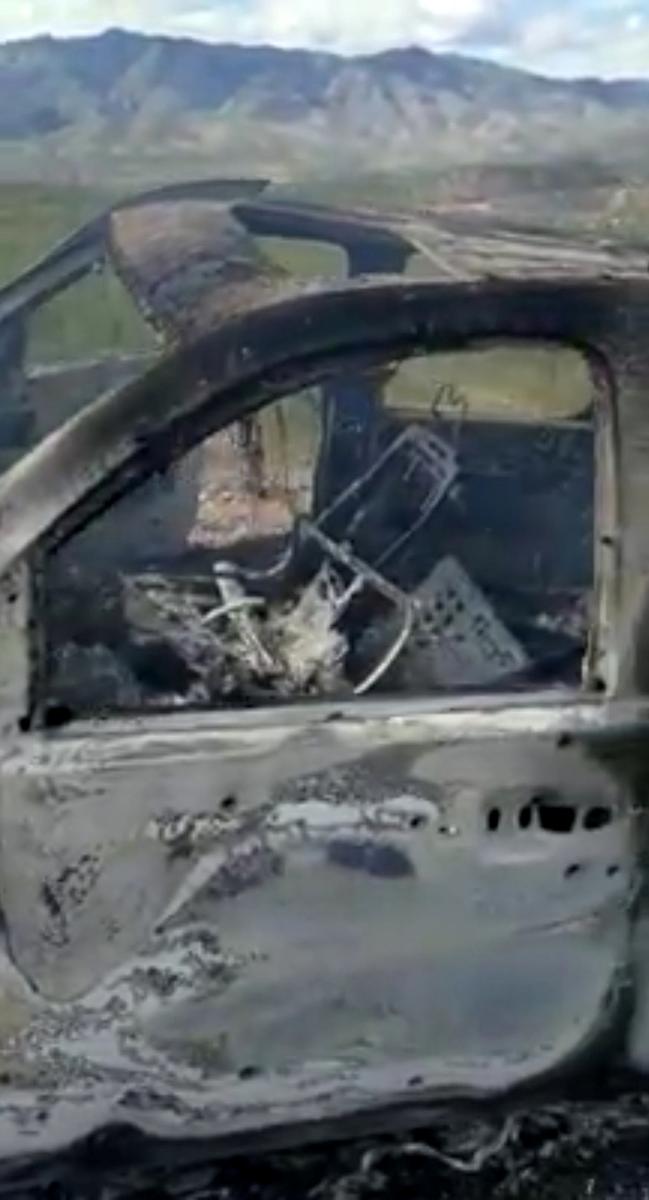 MEXICO CITY (Reuters) – Gunmen killed nine women and children in the bloodiest attack on Americans in Mexico for years, prompting U.S. President Donald Trump to offer to help the neighboring country wipe out drug cartels believed to be behind the ambush.

All nine people killed in Monday’s daytime attack at the border of Chihuahua and Sonora belonged to the Mexican-American LeBaron family, members of a breakaway Mormon community that settled in northern Mexico’s hills and plains decades ago.

A video posted on social media showed the charred and smoking remains of a vehicle riddled with bullet holes that was apparently carrying the victims on a dirt road when the attack occurred.

“This is for the record,” says a male voice speaking English in an American accent, off camera, choking with emotion.

“Nita and four of my grandchildren are burnt and shot up.”

Reuters could not independently verify the video.

A relative, Julian LeBaron, called the incident a massacre and said some family members were burned alive.

In a text message to Reuters he wrote that four boys, two girls and three women were killed. Several children who fled the attack were lost for hours in the countryside before being found, he said.

He said it was unclear who carried out the attack.

Mexican Security Minister Alfonso Durazo said the nine, traveling in several SUVs, may have been victims of mistaken identity, given the high number of violent confrontations among warring drug gangs in the area.

But the LeBaron extended family has often been in conflict with drug traffickers in Chihuahua and a relative of the victims said the killers surely knew who they were targeting.

“We’ve been here for more than 50 years. There’s no-one who doesn’t know them. Whoever did this was aware. That’s the most terrifying,” said Alex LeBaron, a relative, in one of the villages inhabited by the extended family.

He said all of the dead were U.S. citizens, and most also held dual citizenship with Mexico.

Under Trump, the United States and Mexico have often been at odds over trade, the U.S. president’s anti-immigration rhetoric and his plans to build a wall on their common border.

But Trump has praised Lopez Obrador, his Mexican counterpart who took office 11 months ago, for helping to reduce the flow of Central American migrants to the United States.

Trump tweeted that he would await a call from Lopez Obrador, urging him to accept U.S. assistance.

Lopez Obrador said he would call Trump on Tuesday about ways to cooperate on security but rejected what he called any foreign government intervention.

“I’ll speak with President Trump to thank him for his support, and to see if in cooperation agreements there’s the possibility of getting help,” he told a news conference. “I don’t think we need the intervention of a foreign government to deal with these cases,” he added.

Trump wrote on Twitter: “The great new President of Mexico has made this a big issue, but the cartels have become so large and powerful that you sometimes need an army to defeat an army!”

“This is the time for Mexico, with the help of the United States, to wage WAR on the drug cartels and wipe them off the face of the earth,” Trump added.

Mexico has used its military in a war on drug cartels since 2006. Despite the arrest or killing of leading traffickers, the campaign has not succeeded in reducing drug violence and has led to more killings as criminal groups fight among themselves.

The government has registered more than 250,000 homicides in the last dozen years, most of them related to the drug war.

Lopez Obrador has blasted the security strategy of previous Mexican governments, saying more than a decade of war against drug traffickers is officially over and he will seek alternative solutions.

The U.S. Drug Enforcement Administration and the FBI already work closely with Mexico to combat the cartels.

Falko Ernst, senior analyst for the International Crisis Group in Mexico, said Trump’s tweet suggests he may be gearing up to pressure Mexico over security, especially with his campaign under way for re-election in November 2020.

The burnt wreckage of a vehicle transporting a Mormon family living near the border with the U.S. is seen, after the family was caught in a crossfire between unknown gunmen from rival cartels, in Bavispe, Sonora, Mexico November 4, 2019, in this picture obtained from social media. Mandatory credit KENNETH MILLER/LAFE LANGFORD JR/via REUTERS

“If he throws in his whole leverage, as we’ve seen with migration, then there is very little the Mexican government can do to hold its ground,” Ernst said.

Northwestern Mexico has been home to small Mormon and Mormon-linked communities with family ties to the United States since the late 19th century. The early Mormon settlers in Mexico fled the threat of arrest in the United States for practicing polygamy. The practice is observed by a shrinking number of Mormons in Mexico.

In 2010, two members of the Chihuahua Mormon community, including one from the LeBaron family, were killed in apparent revenge after security forces tracked drug gang members. The Mormons had suffered widespread kidnappings before that.