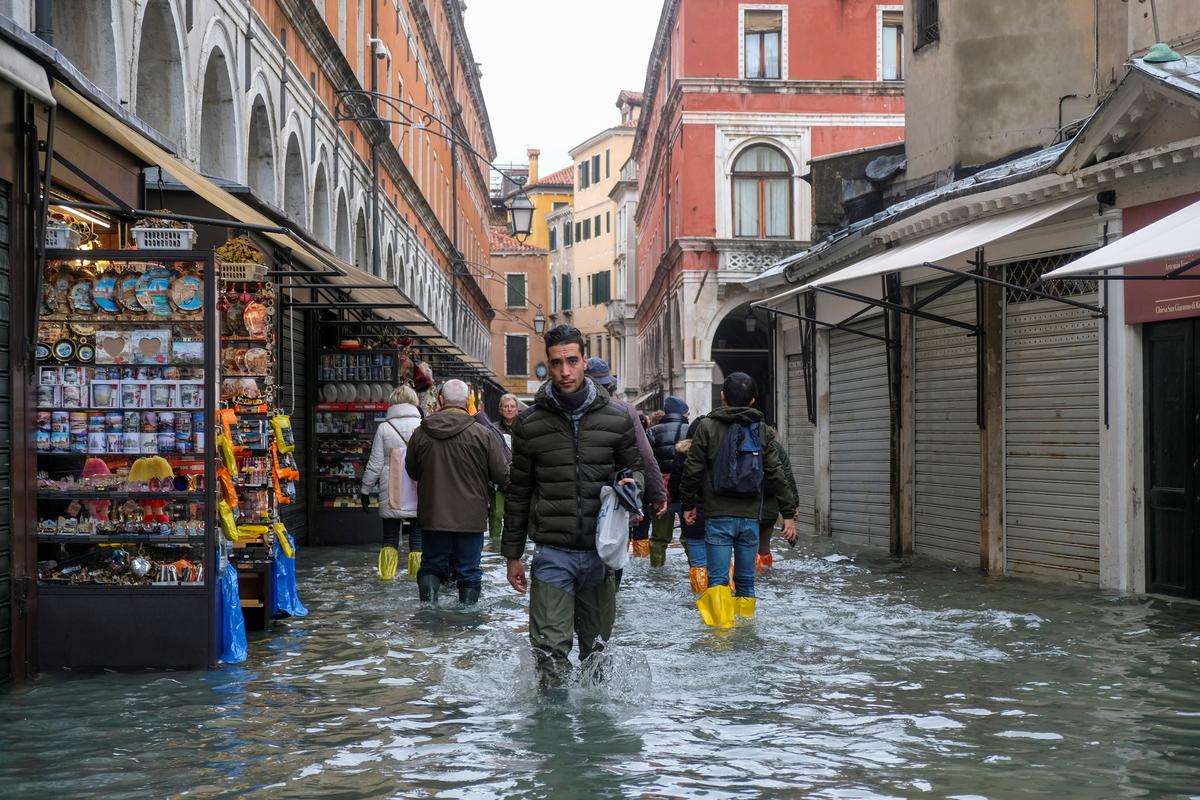 ROME (Reuters) – Warming seas and excavations within the Venice lagoon mean the exceptionally high flood waters in the city this week are also saltier, posing an extra threat to its architectural treasures.

When the water recedes from the cobbled lanes, marbled palaces and ancient churches of a city that rose up out of marshes 15 centuries ago it leaves salt crystals which slowly corrode the brickwork and will eventually eat it away.

“With the salt water everything becomes more difficult for us,” Mayor Luigi Brugnaro said on Friday as a fresh inundation left 70% of Venice submerged just three days after it suffered the worst floods in more than 50 years.

The lagoon has always held a mixture of water from rivers which feed it and that which enters via openings to the sea. Rising sea levels brought about by climate change and the digging of new canals and other structures mean more salt water is coming in from the Adriatic.

In the 1960s, a canal was dug in the lagoon for oil tankers to reach the petrochemical plant of Marghera, a port less than 5 km (3 miles) from the old center of Venice.

More recently, moon-shaped piers built to protect the gaps of the Venice lagoon were reckoned by the scientists of the National Center for Research (CNR) to have created big depressions in the sea bed, which would also allow more sea water in.

“The excavations of canals, in particular the one dedicated to oil tankers, have opened highways to the sea,” said Gianfranco Bettin, former deputy mayor of Venice and long-time leader of the Greens in the Veneto region.

“Global warming has contributed by increasing the sea level and the strength of the winds that push the water towards the city,” he added.

The main concern centers on Venice’s Byzantine St. Mark’s Basilica, with its ancient mosaics and marble columns, which are especially fragile.

On Tuesday the nave of church was flooded for the sixth time in 1,200 years and the second in just 13 months. The saltwater almost filled the crypt, whose marble columns support the church.

“The water was not supposed to inundate the crypt after work to seal it undertaken in the 1990s. But the tide was so high that the water poured in through the window,” said Pierpaolo Campostrini, curator of the UNESCO world heritage church.

Campostrini, who is also an academic at the city’s Ca’ Foscari University, talked to Reuters on Friday while trying to reach the huge St. Mark’s Square once described as Europe’s living room.

“If the crypt becomes a swimming pool, we’ll face an unknown situation,” he said, as water was pumped out of the basilica. “The salt could cause a collapse of the vault, a risk that nobody wants to take.”