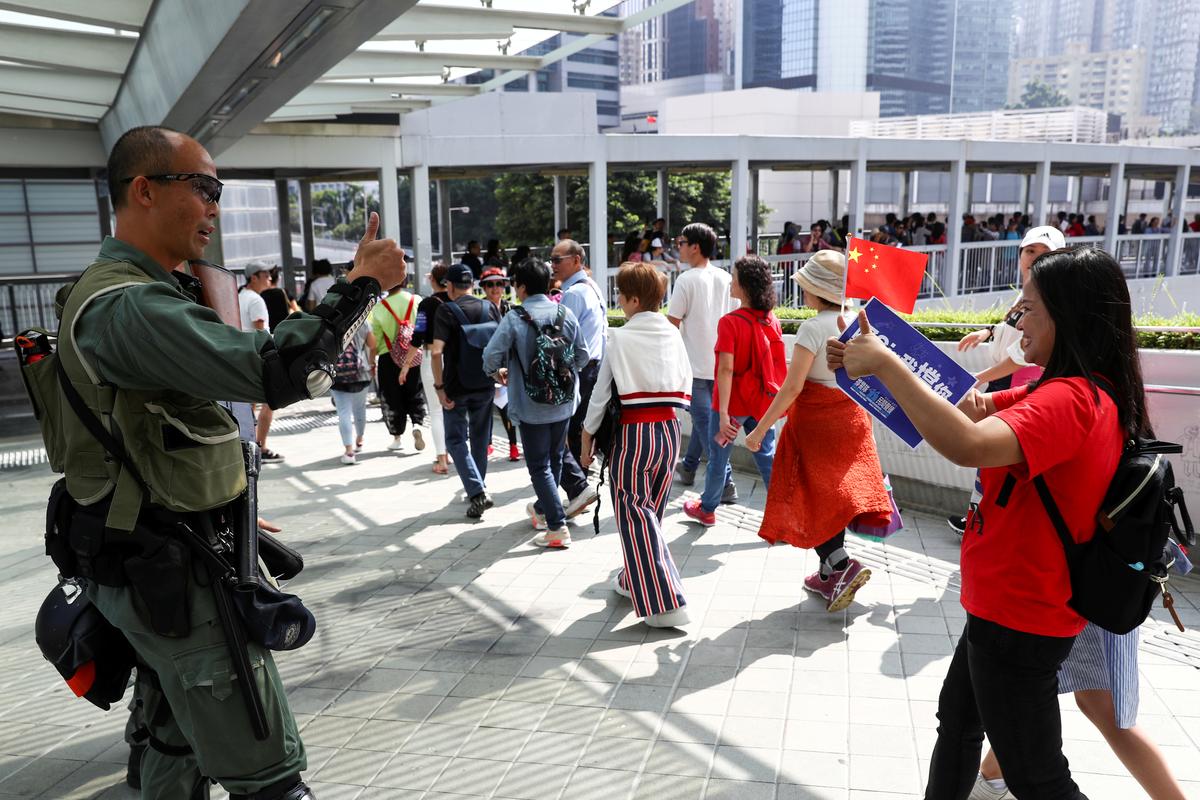 HONG KONG (Reuters) – Hundreds of pro-China protesters rallied in Hong Kong on Saturday to denounce increasingly violent anti-government unrest in the Chinese-ruled city and support the police who have become a prime target of attack.

A pro-government supporter and a riot policeman flash thumbs up during a rally at the Legislative Council (LegCo) building in Hong Kong, China, November 16, 2019. REUTERS/Athit Perawongmetha

The former British colony has been embroiled in more than five months of demonstrations, with pro-democracy protesters angry at perceived Communist Party meddling in a city guaranteed its freedoms when it returned to Chinese rule in 1997.

Waving Chinese and Hong Kong flags, pro-China protesters gathered by the city’s legislature and police headquarters. Some held up posters stating “Police we stand with you,” while others chanted “Support the police.”

Pro-China protesters have gathered before, but in far smaller numbers than those angry at Communist Party rulers in Beijing.

Saturday’s crowd was a mix of young and elderly, some of whom had brought their children along to the rally.

“From the bottom of our hearts, we believe it is the correct thing to support the police in fighting the rioters for Hong Kong citizens,” said a 49-year-old housewife surnamed Kong.

“A lot of people keep silent, afraid of the rioters. It’s time for all the people who are silent to step up and say that’s enough.”

Anti-China students and activists have barricaded at least five campuses in the last week, stockpiling petrol bombs, catapults, bows and arrows and other weapons.

Police have kept their distance for more than two days, but many observers are afraid of what happens if and when they move in.

A 70-year-old street cleaner died on Thursday after being hit on the head by one of several bricks police said had been thrown by “masked rioters”. On Monday, police blamed a “rioter” for dousing a man in petrol and setting him on fire. The victim is in critical condition.

On the same day, police shot a protester in the abdomen. He was in stable condition.

Many pro-police protesters laid white flowers outside the government office to pay their respects to the cleaner. Others applauded and cheered the police, some bowing and giving thumbs up as they walked past riot police on duty.

Joe Lam, a 34-year-old who referred to the protesters as “cockroaches” said he supported democracy and participated in the 2014 Umbrella Movement but condemned the violence in recent months.

“In 2014, we were peaceful and occupying to raise awareness. Now, it’s ‘if you don’t agree with me, you are against me and I will throw Molotov cocktails at you’.”

Hong Kong returned to Chinese rule under a “one country, two systems” formula guaranteeing its colonial-era freedoms. Protesters’ demands include full democracy and an independent investigation into perceived police brutality.

China denies interfering and has blamed Western countries for stirring up trouble. Police say they are acting with restraint in the face of potentially deadly attacks.

Hong Kong universities, in a joint statement, said they regretted the fact that “the government response had so far not been effective”.

“However, any demand that universities can simply fix the problem is disconnected from reality: these complicated and challenging situations … are reflections of Hong Kong-wide disagreement, and the government must take the lead with swift and concrete action.”

Authorities said on Saturday that a key highway blocked by anti-government protesters on Friday had reopened after the government had cleared debris and petrol bombs on the road.

The Tolo highway, which runs along the side of the leafy campus of Chinese University, was partially opened by protesters on Friday but then shut again during the evening rush hour, exposing splits in a movement that has been largely leaderless.

Some train services which had been suspended earlier in the week were gradually resuming, the city’s metro operator MTR Corp said on Saturday.

At some of China’s military garrisons across the city there were signs of ongoing activity. At the sprawling Tam Mei barracks in the rural New Territories over one hundred troops in khaki fatigues were marching.

Around half a dozen armored personnel vehicles were being serviced and scrubbed by troops in green T-shirts. Trucks also rumbled past the perimeter fence that were filled with troops.

The People’s Liberation Army (PLA) has stayed in the barracks since 1997, but China has warned that any attempt at independence for Hong Kong will be crushed.

Later on Saturday, LGBT activists were due to hold a pride rally rather than the annual march that the city typically sees.