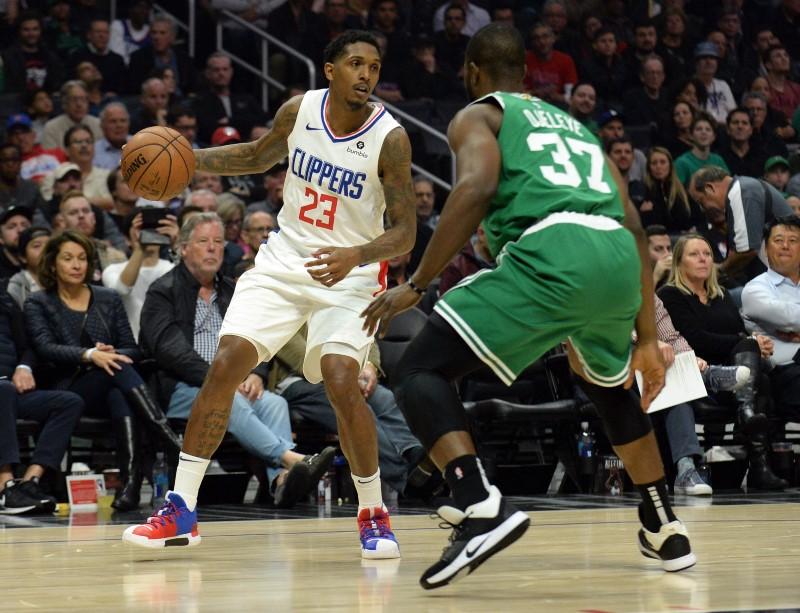 Kawhi Leonard returned from a three-game absence caused by a knee injury to score 17 points on 7-of-20 shooting. Patrick Beverley corralled a career-best 16 rebounds to go along with 14 points and seven assists, and JaMychal Green added 10 points as Los Angeles won its third straight game.

The contest marked the first time George and Leonard played together since both joined the Clippers in the offseason. Wednesday’s game was George’s fourth of the campaign.

Luka Doncic scored 22 of his game-high 35 points in the first quarter as host Dallas made quick work of injury-riddled Golden State in a 48-point thrashing.

Doncic ran up his 35 points in only 26 minutes, hanging around long enough to record a second straight triple-double with a game-high-tying 10 rebounds and a game-high 11 assists. According to ESPN, the 25:30 total that Doncic played was the least court time for a player in a 30-point triple-double in NBA history.

Tim Hardaway Jr. went 4-for-4 from 3-point range on a 20-point night against his dad’s former team, and the Mavericks shot 22-for-38 (57.9 percent) on treys en route to their third straight win. Rookie Eric Paschall led Golden State with 22 points.

Giannis Antetokounmpo had 33 points and 11 rebounds, pacing Milwaukee to a win at Atlanta.

It was the ninth time that Antetokounmpo has had 30 points and 10 rebounds in a game this season, tops in the NBA. He has accomplished the feat in eight of his past nine games. The Bucks have won five straight and nine of their past 10. Eric Bledsoe added 28 points, seven rebounds and five assists for Milwaukee.

Bradley Beal scored 21 of his 33 points in the third quarter as host Washington held on to beat sliding San Antonio.

Beal eclipsed 30 points in four consecutive contests for the first time in his career as the Wizards sent San Antonio to its first seven-game losing skid since Gregg Popovich’s first season as Spurs coach in 1996-97.

Rookie guard Tyler Herro added 22 points as the Heat improved to 6-0 at home this season. Robinson, a 6-foot-7 forward who went undrafted last year, made 9 of 15 3-point tries, falling one short of the team record of 10 3-pointers held by Mario Chalmers and Brian Shaw.

The Nets won for the second time in three games without Kyrie Irving, who sat out due to right shoulder impingement. Spencer Dinwiddie started for Irving and contributed 20 points while tying a season high with eight assists.

Allen enjoyed one of the most productive games of his career and recorded his fifth double-double of the season. Taurean Prince added 20 points while shooting 6-for-15 in a game the Nets never led by more than 12. Terry Rozier topped the Hornets with 18 points.

Lauri Markkanen reached the 20-point mark for the first time since the season opener with 24 points, and host Chicago ended a three-game losing streak by pounding slumping Detroit.

Markkanen, who was averaging 12.3 points in nine games this month, made half of his 14 field-goal attempts and 7 of 11 free throws. Tomas Satoransky supplied 15 points and seven assists, and Shaquille Harrison had 15 points, 11 rebounds, five assists and three steals for Chicago.

Former Bull Derrick Rose scored 18 points off the bench for Detroit, which has lost five straight and is 1-7 on the road. Blake Griffin scored 16 points and Luke Kennard had 14, but both shot just 4 of 15 from the field.

Joel Embiid had 23 points, 12 rebounds and five assists while Ben Simmons hit the first 3-pointer of his career, and Philadelphia overturned a 17-point deficit on the way to a victory over visiting New York.

Simmons hit his much-anticipated 3-pointer with 8:20 remaining in the first quarter, and the crowd exploded. Simmons had missed the first 17 treys of his career before connecting from the corner. It was his lone long-distance attempt of the night and his first 3-point try of the season.

Marcus Morris scored 22 points and grabbed 13 rebounds while Julius Randle and Frank Ntilikina scored 17 points each for the Knicks. The Sixers improved to 5-0 at home and have won nine straight overall against the Knicks.

Will Barton had 15 points and seven rebounds, and Paul Millsap scored 11 points for Denver, which had all five starters finish in double figures en route to its seventh win in eight games.

The Magic were depleted after they lost center Nikola Vucevic and forward Aaron Gordon to sprained right ankles in the first half. Neither returned.