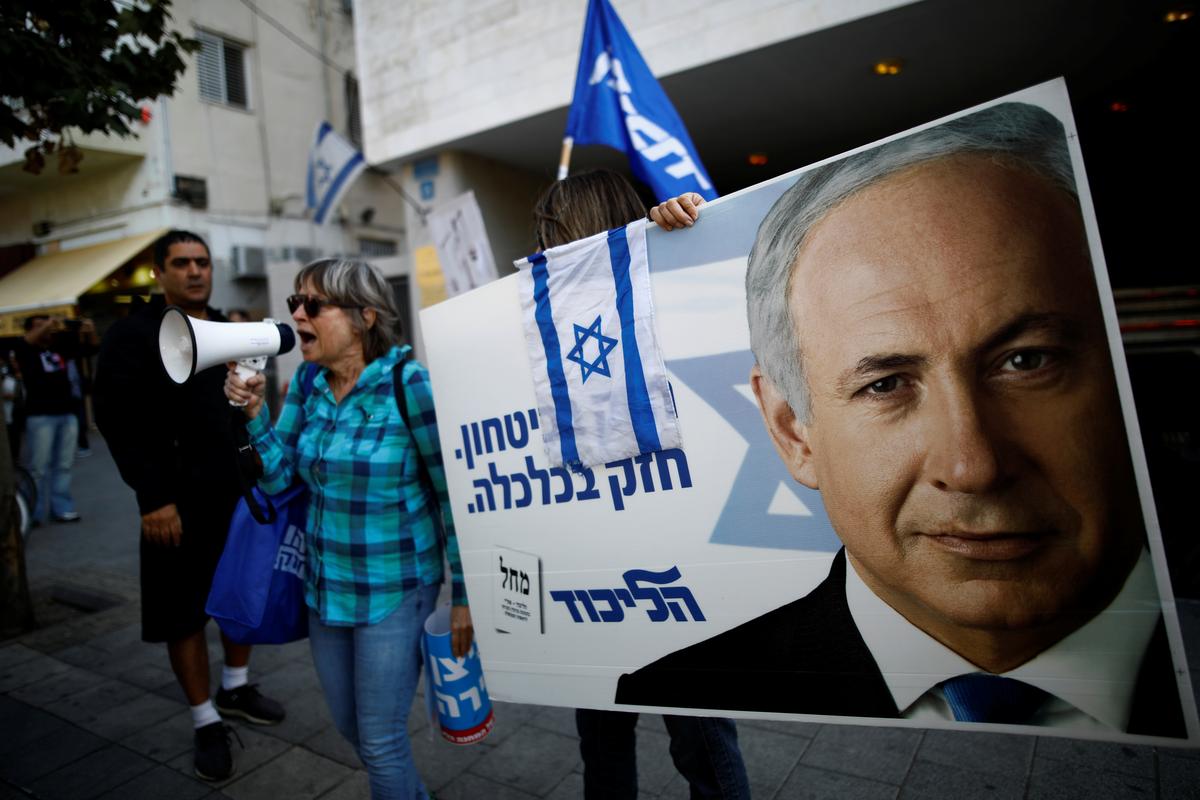 Netanyahu said he would not quit after he was indicted on charges of bribery, fraud and breach of trust by Israel’s attorney general on Thursday night.

The 70-year-old right-wing Likud Party leader denies all wrongdoing and denounced the indictment – the first against a sitting Israeli prime minister – as an “attempted coup.”

But his ability to lead a country mired in political crisis, after two inconclusive elections this year that failed to produce a government, is being questioned.

The centrist Blue and White Party headed by Netanyahu’s main rival, Benny Gantz, issued a statement calling on him to “immediately resign from all ministerial positions in the government”.

The party – which has 33 of parliament’s 120 seats to Likud’s 32 – said its lawyers had formally approached the prime minister and attorney general’s offices saying it was “imperative” that Netanyahu step down.

Under Israeli law, as prime minister he is under no obligation to do so. But with Israel heading towards a likely third election in less than a year, Netanyahu could soon find himself in the difficult position of trying to win an election while preparing to be prosecuted.

The support of his Likud party colleagues is likely to be crucial to Netanyahu’s chances of staying in power.

Senior ministers issued public statements declaring their support, and Justice Minister Amir Ohana said he was proud of his fellow Likud parliamentarians for standing by Netanyahu, adding pointedly: “Except for two of them.”

Netanyahu’s ultra-nationalist coalition partner Bezalel Smotrich, the transport minister, also offered sympathy for Netanyahu over the charges against him, announced by Attorney-General Avichai Mandelblit on Thursday.

Smotrich said in a tweet that planned street protests in support of the prime minister were aimed at preventing “a predatory, violent and dangerous judicial dictatorship”.

After a national televised address on Thursday night Netanyahu himself kept a low profile on Friday, posting a tweet with heart and an Israeli flag emojis saying: “Thank you for your support and love. Shabbat Shalom.”

But Israel’s election schedule could work against Netanyahu, Israel’s longest serving prime minister after 10 successive years in power plus three years in office in the 1990s.

President Reuven Rivlin on Thursday set a three-week deadline for lawmakers to nominate a new candidate from their own ranks to try to form a new government after Netanyahu and Gantz both failed to do after April and September elections.

If that also fails to produce a government, an election will be triggered in three months.

A source close to Rivlin said he expected appeals to disqualify Netanyahu as a candidate because of the indictment. If the president does so, Netanyahu could be ejected by Likud.

“Netanyahu’s great fear is that, amid the extraordinary constitutional crisis has been created, and amid the political and legal synchronization, he will emerge as the only member of parliament who cannot do this (form a government),” wrote Tal Shalev, political commentator for Israel’s Walla news site.

Two of the three cases involve news media outlets whose bosses allegedly received inducements from Netanyahu in return for more favourable coverage on his policies and personal conduct.