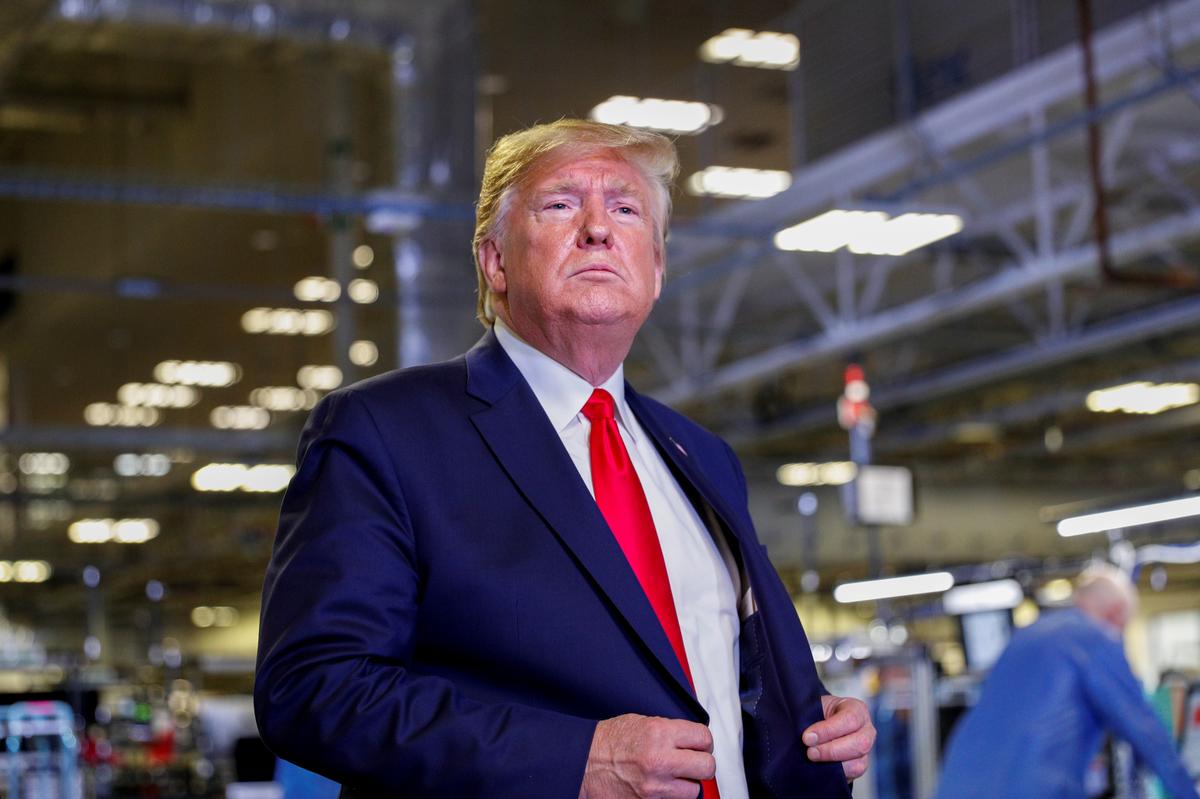 WASHINGTON (Reuters) – President Donald Trump on Friday accused a witness in the Democratic-led impeachment inquiry of lying and offered an explanation for his controversial use of his personal lawyer Rudy Giuliani on Ukraine policy, saying Giuliani’s crime-fighting abilities were needed to deal with a corrupt country.

Trump made his remarks the day after the fifth and final scheduled day of public hearings in the U.S. House of Representatives inquiry, which threatens his presidency even as he seeks re-election in November 2020.

The Republican president took issue with testimony on Thursday by David Holmes, a U.S. embassy official in Ukraine. Holmes said under oath that at a Kiev restaurant he overheard a July 26 cellphone conversation in which Trump loudly pressed Gordon Sondland, the U.S. ambassador to the European Union, for details on whether Ukraine would carry out politically motivated investigations the president was seeking.

“That was a total phony deal,” he added.

Trump appointed Sondland to the envoy post after the wealthy Oregon hotelier donated $1 million to his inaugural committee. While Sondland in testimony described an easygoing relationship between the two, Trump said on Friday he had spoken with him “a few times,” adding, “I hardly know him, OK?”

Testimony at the hearings put a spotlight on Trump’s decision to give Giuliani, a private citizen with no formal job in his administration, an outsized role to shape American policy toward Ukraine rather than using the U.S. government’s usual diplomatic and national security channels.

During the hearings, current and former White House officials and diplomats voiced alarm at Giuliani’s activities, such as trying to push Ukraine to carry out two investigations that could harm Trump’s political adversaries.

Trump said Giuliani was the right person for the job.

“He’s like an iconic figure in this country for two reasons. He was the greatest mayor in the history of New York and he was the greatest crime fighter probably in the last 50 years,” Trump said of Giuliani, who previously served as the mayor of the largest U.S. city and as a federal prosecutor.

A focus of the inquiry is a July 25 telephone call in which Trump asked Ukrainian President Volodymyr Zelenskiy to open two investigations.

One involved Joe Biden, a top contender for the Democratic nomination to face Trump in the 2020 presidential election, and his son Hunter Biden, who had worked for Ukrainian energy company Burisma. Trump has accused Biden of corruption, but has not provided evidence. Biden has denied wrongdoing.

The other investigation involved a debunked conspiracy theory promoted by Trump’s allies that Ukraine meddled in the 2016 U.S. presidential election to hurt his candidacy and boost Democratic rival Hillary Clinton.

U.S. intelligence agencies and former Special Counsel Robert Mueller determined that Russia used a campaign of propaganda and hacking to interfere in the election to try to help Trump win.

Testimony in the impeachment inquiry has shown that Trump in May instructed top U.S. officials to work with Giuliani on Ukraine policy. This came after the president removed Marie Yovanovitch as U.S. ambassador to Ukraine at Giuliani’s urging even as the former mayor was pressing officials in Kiev to conduct the two investigations.

Democrats also are looking into whether Trump abused his power by withholding $391 million in security aid to Ukraine as leverage to pressure Kiev into digging up dirt on his political adversaries. The money – approved by the U.S. Congress to help Ukraine combat Russia-backed separatists in the eastern part of the country – was provided to Ukraine in September only after the controversy spilled into public view.

Trump’s allies have argued that the two investigations were not aimed at gaining a domestic political advantage but rather at combating corruption in a country receiving millions of dollars in U.S. aid.

“I believed then, as I do now, that the men and women of the State Department, not the president’s personal lawyer, should take responsibility for Ukraine matters,” Sondland said.

Trump said Ukraine is “known as being the third most corrupt country in the world.”

“Are we going to be sending massive amounts of money to a country and they’re corrupt and they steal the money and it goes into everybody’s bank account?” Trump told Fox News.

Ukraine ranked 120 out of the 180 countries assessed in Transparency International’s Corruption Perceptions Index in 2018. Its score of 32 out of 100 on the index, which is widely used by companies when deciding where to do business, indicates Ukraine has serious corruption issues.

If the Democratic-led House to approve articles of impeachment – formal charges – against Trump, the Senate would then hold a trial on whether to convict Trump and remove him from office. Trump’s fellow Republicans control the Senate and have shown little support for removing him.

Reporting By Steve Holland and Lisa Lambert; Writing by Will Dunham; Editing by Chizu Nomiyama and Jonathan Oatis